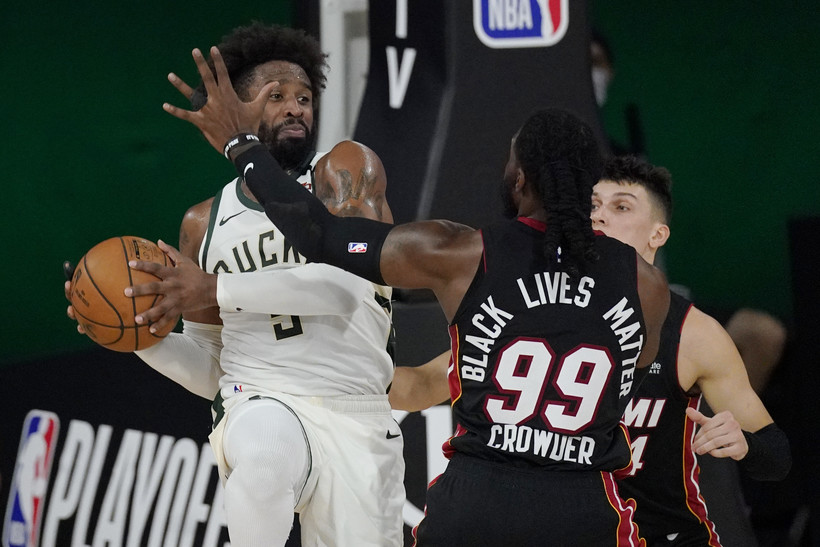 Season Ends For Milwaukee Bucks With Antetokounmpo On The Bench

The season is over for the Milwaukee Bucks.

The Miami Heat beat the Bucks 103-94 Tuesday in Game 5 of the NBA’s Eastern Conference semifinals. MVP finalist Giannis Antetokounmpo missed the game after aggravating a sprained ankle in Game 4. With the victory, the Heat clinched the series 4-1.

"I’m proud of the guys. They left it out there," Bucks head coach Mike Budenholzer said.

With their best player wearing a face mask and sitting on the bench, the Bucks finished the first quarter with a 9-point lead. Their offense was firing on all cylinders, while the Heat looked sloppy, with six turnovers in the first 12 minutes.

Wesley Matthews, who grew up in Madison and played at Marquette, wasn’t afraid to drive to the basket. He played with a level of physicality he hadn’t displayed all season, finishing the game with 11 points and contributing outstanding defense all night.

In the second quarter, the Heat regrouped on defense, while the Bucks lost their shooting touch. Heat shooting guard Tyler Herro, a Milwaukee native, sunk two from behind the arc and finished the game with 14 points. Miami took a 52-46 lead into the locker room.

The Bucks had a scoring drought of more than 6 minutes in the third quarter, before going on an 8-0 run to get back in the game. Bucks center Brook Lopez played with intensity in the second half, posting 12 total rebounds. But Milwaukee couldn’t make enough shots to close the gap. The Bucks finished the game with the fewest points they’ve scored all playoffs.

In fact, Tuesday marked the first time the Bucks failed to break 100 since the NBA returned from its four-month coronavirus hiatus.

On Sunday, the Bucks won Game 4 in overtime to stay in the series. With Antetokounmpo out for most of the game, Milwaukee was led by All-Star Khris Middleton, who had 36 points. On Tuesday, Middleton played well defensively and contributed 23 points, but couldn't quite will the Bucks to victory again.

No NBA team has ever come back from a 3-0 series deficit. 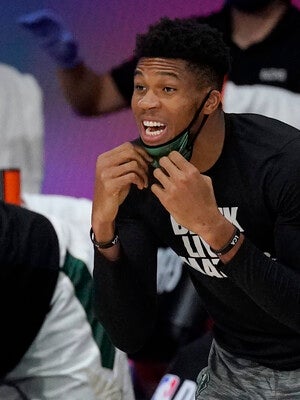 Still, it’s a disappointing end to a promising season. The Bucks were dominant before the NBA suspended its season in March due to the coronavirus pandemic, entering these playoffs as the top seed. It's the second year in a row the Bucks entered the postseason with the best regular season record in basketball but failed to reach the finals.

"I think we’re always trying to find ways to get better, and we’ll do that again, but right now we just had our season come to a conclusion and (we'll) just kind of digest that," Budenholzer said.

This year, the Bucks didn’t benefit from home court advantage at Fiserv Forum, with the NBA finishing its season in a coronavirus bubble in Orlando. But Budenholzer said the restart has been difficult for every team.

"We had a heck of a year through March 11, a lot, a lot of good things, a lot of positives," he said. "And we had our moments here in Orlando, but ultimately we weren't able to get it done. I think everybody's kind of dealing with the same circumstances."

To make matters worse, Antetokounmpo’s future in Milwaukee is uncertain. He’ll become an unrestricted free agent after next season if he doesn’t sign a super max extension with the Bucks in the coming months. In a news conference after the game, Antetokounmpo said he hopes the team will continue to build on its winning culture in the coming years.

It might not be the ending they hoped for, but the Bucks have already made history these playoffs.

To protest the police shooting of Jacob Blake in Kenosha, they refused to leave the locker room for Game 5 of their first-round playoff series against the Orlando Magic. The move sent shock waves through the sports world, with Major League Baseball, the WNBA and the NHL also postponing games.

It also left NBA players questioning whether they should even finish the season. After conversations between players and league representatives, the NBA committed to creating a social justice coalition and pushing for basketball stadiums to be used as polling places.

In Milwaukee, Fiserv Form and Miller Park will serve as early voting locations.

"I think winning is important. We had high expectations, starting the season, throughout the season, coming here. You always want to realize the expectations, but the relationships, the character, what this group did — it would be great if you could have both, but I think if you’re going to choose one, I’d like to be with guys who have character and stand for something," Budenholzer said.

The Miami Heat swept its first-round opponent, the Indiana Pacers. The Heat will face the Boston Celtics or the Toronto Raptors in the Eastern Conference finals.