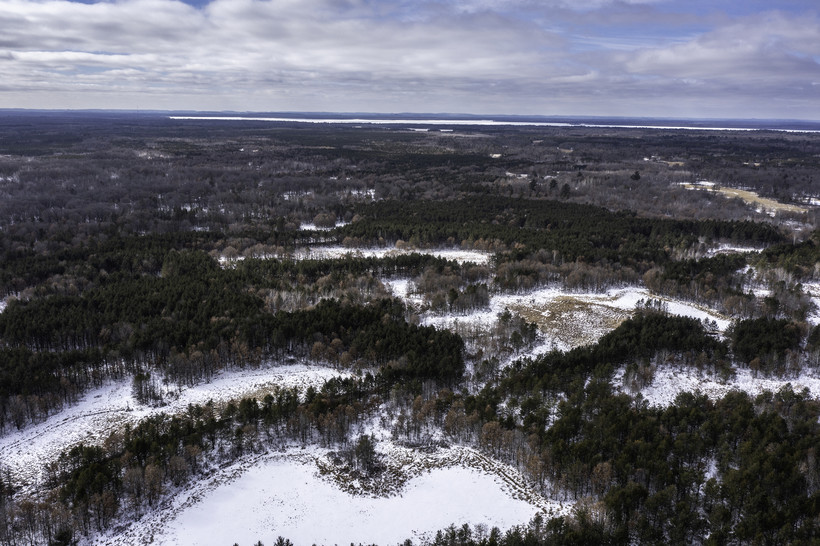 A conservation group aims to use its purchase of more than 3,000 acres of central Wisconsin forest land to increase biodiversity and preserve wetlands. Patrick Flood Photography/Photo courtesy of The Nature Conservancy

A large land purchase in central Wisconsin will help preserve the region's forest and wetlands and expand both biodiversity and recreational opportunities.

The Nature Conservancy, a conservation group, announced the purchase of 3,243 acres of forest and wetlands in Adams County. That's part of the Central Sands region of Wisconsin, characterized by its large deposits of sand and gravel. The land the conservancy acquired consists mostly of large tracts of red pine being cultivated for logging for the paper industry. About 500 acres of the land are wetlands.

The Nature Conservancy will keep the land open for hiking, hunting and snowmobiling, said conservation project manager Stephanie Judge. It will also seek to manage the land to expand the number of tree and plant species that can grow there, and to support habitats for the endangered Karner blue butterfly and the Kirtland's warbler, a songbird that lives in young jack pines.

Judge said that natural diversity is present on the land now, but the tracts will be managed to allow more species to thrive. That will include managed logging and prescribed burning.

"When I walk on these properties, I can find a variety of oak trees," Judge said. "I can see our native jack pine. I can find lupine, the host plant required for the endangered Karner blue butterfly, hanging on in the shade of these trees."

Judge said that in time, the restoration of more species will mean better hunting and outdoor recreation on the land as well.

"By thinning out the plantations of red pine and naturalizing the stands to offer a more diverse number of tree species, it's also going to offer better recreation opportunities for hunters and outdoor enthusiasts," she said.

State records show that the conservancy bought the land for $3.5 million from Atlanta-based Meteor Timber. In nearby Monroe County, that company has been engaged in a protracted legal battle as it seeks to fill in wetlands to build a frac sand mine there. In January, it asked the state Supreme Court to intervene in the case.

One factor in making the land available for purchase may have been the hit that the logging industry has taken in Wisconsin. Adams County is just south of Wisconsin Rapids, where the closure of the Verso paper mill in 2020 has led to a years-long, statewide bust in timber prices.

Five separate tracts of land make up the purchase, mostly north and east of the Quincy Bluff and Wetlands State Natural Area. And the purchase represents a significant expansion of The Nature Conservancy’s holdings in Wisconsin. The group now owns 30,334 acres across the state.