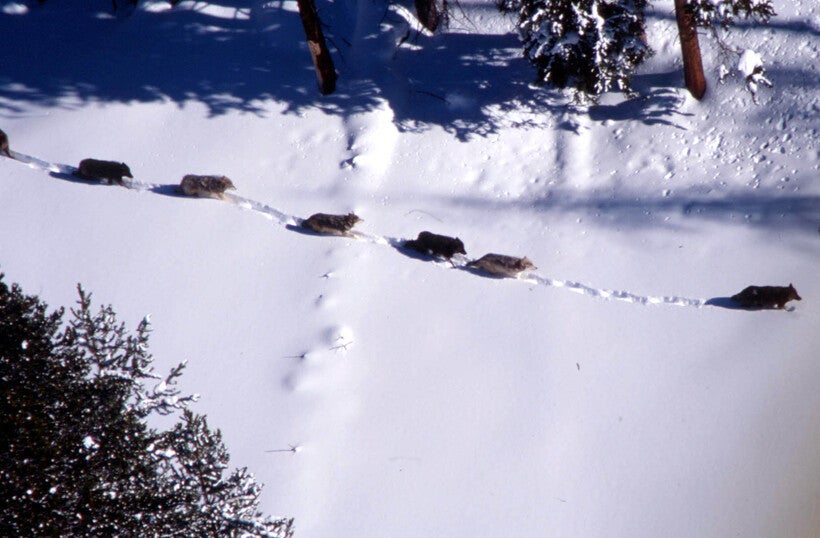 The Wisconsin Natural Resources Board has unanimously approved a harvest quota of 200 wolves following a judge's ruling last week that the state must hold a wolf hunt this month. The decision comes even as the Department of Natural Resources is seeking an appeal to put the judge's order on hold.

The DNR considered the state's most recent wolf count, wolf management plan and response from the three wolf hunting and trapping seasons that were held before a judge ruled in 2014 that the animal should be relisted as an endangered species, in determining the quota.

DNR Secretary Preston Cole said the agency was in an "unusual circumstance" of developing a harvest quota over a matter of days.

"I appreciate the indulgence of the chair and board members in this truncated process to do the best that you can to evaluate the science or lack of science and then make a motion one way or the other," said Cole.

Fred Prehn, board chair, said he recognizes the dynamic situation and rush the agency faced in developing a quota.

"But, we have a job to do, and I think we completed it, but we completed it with what we believe is good science from the department — all politics aside," said Prehn.

Hunters can now apply for a wolf tag beginning at 12:01 a.m. Tuesday through Saturday, Feb. 20.  A drawing of winners will be held on Feb. 22, and those hunters can begin harvesting wolves as soon as they've purchased a license. The cost to apply is $10, and a license to hunt wolves will cost $49. Up to 4,000 permits may be issued to meet the harvest quota by the end of February.

The board's move is a reversal of its decision several weeks ago. The board previously rejected a request from Republican lawmakers that it direct the DNR to hold a hunt this winter.

The decision marks the latest development in a tumultuous back and forth over whether the state should hold a wolf hunt following the Trump administration's move to delist the wolf last fall. Protections for the animal were officially removed across much of the country last month.

The DNR decided in December to resume a wolf hunt this November. The agency has argued more time was needed to develop a science-based quota, update its management plan and gather input from tribes and the public.

The agency's decision drew backlash from hunters and Republican lawmakers, which eventually resulted in a lawsuit filed by Kansas-based group Hunter Nation. The group asked a Jefferson County judge to rule that the hunt immediately resume this month, and the court sided with the hunting organization last Thursday.

"On the appeal, we're just frustrated that the DNR and Department of Justice is even pushing for this when today they came to the table and made it very clear that the wolf hunt is moving forward," said Hunter Nation CEO Luke Hilgemann.

Supporters of the wolf hunt fear protections for the animal will be restored under President Joe Biden after he issued a broad executive order to review agency rules, including the wolf's delisting. The DNR is required to hold a single wolf hunting and trapping season from Oct. 15 through February when the animal is not listed as an endangered species under state law.

Keith Warnke, administrator of fish, wildlife and parks for the DNR, highlighted that public and tribal input in developing a harvest quota was limited in light of the judge's ruling.

Tribal, environmental and animal rights groups have opposed holding a wolf hunt this winter. They've underscored that the state's 1999 wolf management plan is outdated, which set a goal of 350 wolves across the state. The plan was last revisited in 2007.

They also highlighted the state's obligations to consult with tribes on wolf management under federal treaties. A spokesperson with the Great Lakes Indian, Fish and Wildlife Commission declined to comment on whether tribes would seek any legal action regarding the hunt.

Wolf advocates have also expressed concerns over holding the harvest in the middle of the animal's breeding season. Rachel Tilseth, wolf tracker and founder of Wolves of Douglas County Wisconsin, fears holding a hunt now will only lead to negative outcomes for both hunters and wolves.

Wisconsin has 1,195 wolves on the landscape, according to the DNR. The agency's Dave MacFarland said staff consulted two studies in developing a quota for the wolf harvest while also incorporating other impacts on the wolf population, such as weather, depredation controls and vehicle accidents. While the population is healthy, he noted that it's relatively small compared to other harvested species in the state.

The DNR is appealing the ruling by Jefferson County Judge Bennett Brantmeier. The agency is asking for an expedited stay on the decision to prevent the ruling from taking effect. The court granted a motion by the Sierra Club on Monday to file a brief in support of the DNR's effort to put a hold on the judge's order. Hunter Nation has until noon Wednesday to respond, according to court records.