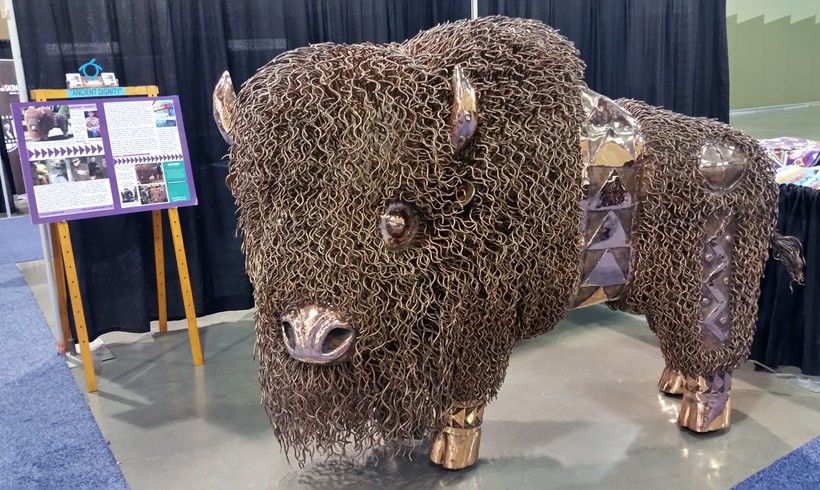 Tribal art on display at the National Congress of American Indians convention in Milwaukee. Chuck Quirmbach/WPR

Native American leaders meeting in Milwaukee this week at the convention of the National Congress of American Indians are asking the Trump administration to do more to combat climate change.

Tribal leaders speaking at the conference say recent wildfires and hurricanes that have destroyed housing and other resources are a sign of rising global temperatures, and that federal action to reduce greenhouse gas emissions is needed.

Their call for change comes days after the Trump administration signed a rule to rollback the Clean Power Plan, and months after the United States announced it would abandon the Paris Climate Agreement, an international agreement to reduce pollutants.

Frustrated by the lack of action at the federal level, Jodi Gillette, former senior policy advisor for Native American Affairs in the Obama administration, said some tribes aren't waiting for Washington.

One example being the low-carbon energy generation by the Forest County Potawatomi.

"They have 30 kilowatts of solar on top of their tribal building. They're adding 5 megawatts of power to power their casino. And they're piping in the biogas generation plant heat back into their water system to do their laundry," Gillette told the convention Tuesday.

She also praised efforts by the Oneida, Ho-Chunk and Menominee tribes to reduce carbon emissions.

Interior Department official John Tahsuda said federal agencies are still trying to get their hands around the science of climate change.

"What is the science of it, what's going on, because if we don't understand the science, then we don't know how to address it adequately," Tahsuda said to the audience.

Also at the convention, tribes expressed support for greater tribal rights in the North American Free Trade Agreement, which is currently being renegotiated by the U.S., Canada and Mexico, the agreement's member countries.

Perry Bellegarde, national chief of the Assembly of First Nations in Canada, said it's not too late to add language affirming treaty rights, sovereignty and other tribal powers in the trade agreement.

When the NAFTA agreement took effect in 1994, Bellegarde said native nations across North America were largely left out.

After Bellegarde's remarks, the National Congress of American Indians voted in principle to support greater rights for First Nations people in the trade agreement talks, and will take up a formal resolution on the issue this week.

The convention runs for the remainder of the week.