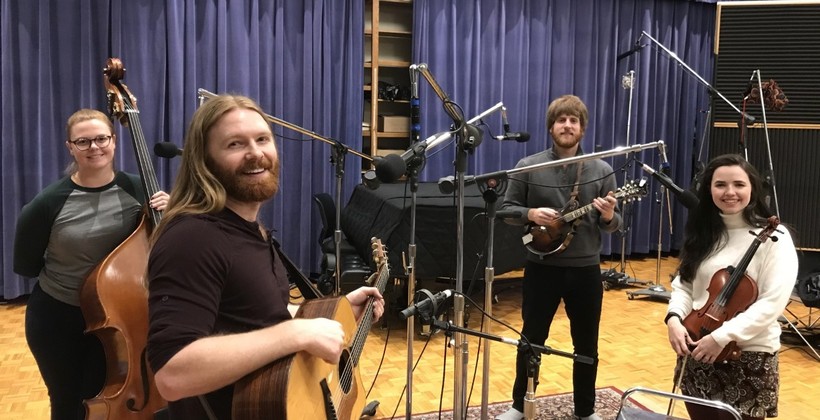 Bluegrass, like so many genres of music, is a mix of styles: old-timey string band music, with a little bit of blues and jazz from down South, some English and Scottish influences from the Appalachian Mountains, and a pinch of gospel music as well.

Like the United States itself, bluegrass takes a lot of ingredients, mixes them together, and comes out with something new that goes on to influence others in creating their own styles.

The Barefoot Movement, the Nashville-based bluegrass band, recently visited WPR's Buck Studio in Madison for an interview and performance. Band members – Noah Wall, Tommy Norris, Katie Blomarz and Alex Conerly – spoke about how they came to bluegrass, and their answers reflected the variety of influences on bluegrass music itself.

Noah Wall: "I think for me, it was something that I always grew up hearing, and being a child of classic rock as I was and heavy metal and all these other things. There was a part of me that resisted it for a while.

But as I got older I just started thinking about the bands that I love, particularly somebody like Led Zeppelin. Then, you pay attention to the blues stuff that they do and 'Oh, there's a mandolin on that track?’ Well, OK.

So, that's what led me to East Tennessee State University, which has that great traditional music program. I studied the old-time string band music and I was just so drawn to it ... As a fiddler, you just have to spend some time studying the old guys. You learn about all of the little traits that each of them have and you can kind of pull from all those things. Hopefully that will help you develop your own."

Katie Blomarz: "I actually grew up playing jazz. It's the same kind of principle as folk music where songs were passed down. The style of jazz was created through that, and that's all relevant to what I do now, the technique and everything that makes me who I am as a bass player."

Tommy Norris: "I was kind of a late bloomer. I actually didn't really get into bluegrass or old-time until I met Noah in high school. She had a mandolin and then I kind of fell in love with the mandolin and then I started exploring. Before that I was kind of a rock kid playing in rock bands like guitar and drums, but since then, I've studied Bill Monroe and all the great mandolinist and a lot of old-time music and jazz and classical. I just studied all kinds of American music and have fallen in love with it."

Alex Conerly: "(I was a) late bloomer as well, in terms of trying to focus on bluegrass more. I grew up with an amalgam of things, but I grew up in a family of singers. Everybody liked to sing, but nobody really played an instrument. This is getting old, so somebody needed to do something! So, I picked up a guitar.

But as far as the musical styles, there was bluegrass and I appreciated it, but I kind of came from just a mix of everything because I wasn't really focused on anything. Even when I moved to Nashville after growing up in Mississippi, I just hopped around in bands and tried to be a chameleon. When I met these guys, it became focused in terms of what the chemistry of the group would work out and it's been a fascinating journey that is still being written."

During the band's time at WPR, the musicians shared their thoughts on writing music, traveling and why roots music is popular with their generation, adults in their 20s and 30s. They also performed new tunes from an upcoming album.

For the full interview and performance, click on the link and enjoy!