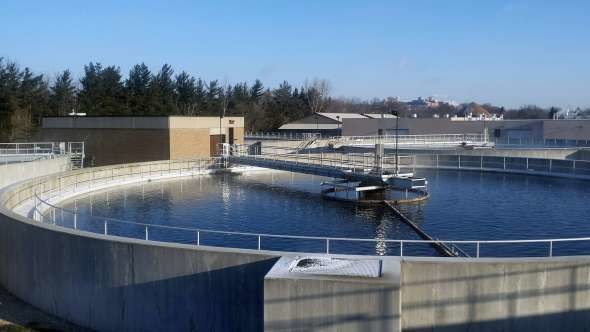 Tanks at the city of Waukesha wastewater treatment plant.

City Of Waukesha In Process Of Weighing Bids From 2 Cities
By Chuck Quirmbach
Share:

Milwaukee's mayor says his city is justified in making a late pitch to sell Lake Michigan water to the city of Waukesha.

For more than a year, Waukesha has said it plans to buy lake water from the southern Milwaukee County suburb of Oak Creek. But no contract has been signed.

On Tuesday, Milwaukee Mayor Tom Barrett confirmed a recent news report claiming Milwaukee made Waukesha an offer two months ago. Milwaukee is not trying to elbow Oak Creek out of the way, the mayor said.

"No, I don't think it's an elbowing out at all. I think for Oak Creek, for Waukesha, for Milwaukee, I think the best thing is everyone looks at it and sees what's in their best interest," Barrett said.

Several years ago the Milwaukee Common Council gave Barrett the authority to negotiate water sales with Waukesha, Barrett said. But Milwaukee lost to Oak Creek in a competition that also included Racine.

Barrett said he's back with a new offer to supply lake water after a panel representing Great Lakes governors shrunk the Waukesha County service area that would use the water. Barrett said that action evaporated his concerns about fueling economic growth in Waukesha.

A group representing Great Lakes mayors may still file a lawsuit over the diversion plan. Barrett said he remains a member of that group, but indicates he has recused himself from the water diversion issue.

According to the Waukesha Water Utility, it's evaluating proposals from both Milwaukee and Oak Creek, and will make a recommendation to the Waukesha Common Council in the next few months.

Waukesha Water Utility General Manager Dan Duchniak said under Milwaukee's offer, it might be cheaper to build the incoming water pipeline to Waukesha, because the pipe would be shorter. Waukesha could connect to Milwaukee's system at 60th Street and Howard Avenue in Milwaukee, as opposed to a site in Oak Creek a few miles to the southeast.

Duchniak said the return flow pipeline of treated wastewater would still discharge into the Root River in Franklin. However, Duchniak cautions Waukesha is evaluating several aspects of both offers, including the cost of the water, technical issues and operating costs.

Waukesha's water diversion would be the first time under the 2008 Great Lakes Compact that a community completely outside the Great Lakes Basin would get lake water.