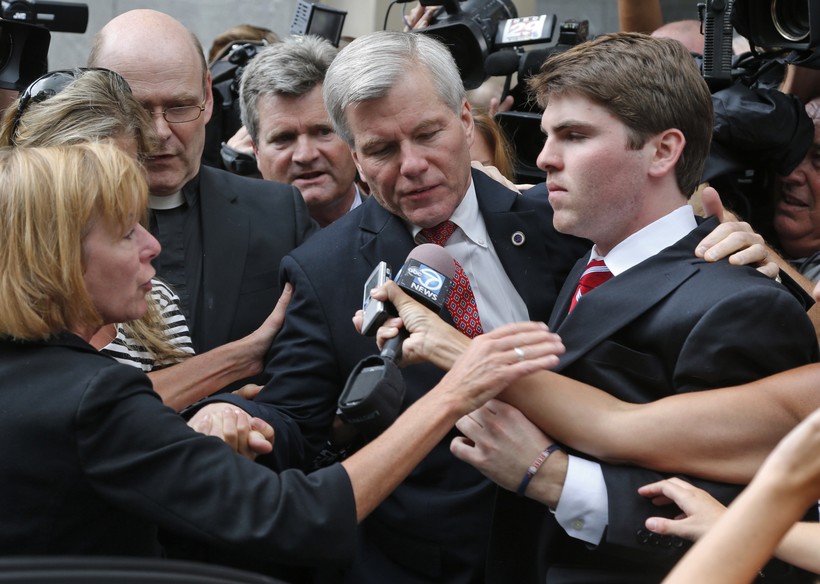 Former Virginia Gov. Bob McDonnell, center, is mobbed by media as he gets into a car with his son, Bobby, right, after he and his wife, former first lady Maureen McDonnell, were convicted on multiple counts of corruption at Federal Court in Richmond, Va., Thursday, Sept. 4, 2014. Steve Helber/AP Photo

Sarah Chayes Offers Advice On How To Combat Corruption She Says Is Running Rampant At Home, Abroad
By Elizabeth Dohms-Harter
Share:

When the king of Phrygia was granted one wish, he asked that everything he touched be turned to gold. After accidentally turning his daughter to gold, he learned his lesson.

Chayes, a former NPR reporter, said in her book, "On Corruption in America: And What Is At Stake" that the greedy, both in America and abroad, have "the Midas disease" — only they haven't had the benefit of the king's lesson.

She added: "When we live in a world where the Midas disease is exalted, it is mortal danger."

It's not just the environment that's been touched by the Midas disease, said Chayes.

"Just about every major crisis in the world today, you scratch the surface and you find corruption underneath it," she said.

The legal definition continues to change, but Chayes describes corruption as the misuse of positions of power for personal gain, and not the public interest — a problem that she said cuts across both public and private sectors. The average Americans Chayes has talked to say they have experienced corruption in the form of rich people owning the political system.

"What that means is, you might get slapped with an EPA ticket for a leaky outboard motor, when the giant factory that's belching toxic chemicals into your river is left alone," she said. "I mean, that's personal, right?"

As a reporter based in Paris who covered the fall of the Taliban in Afghanistan, where she lived for several years, Chayes found that corruption is connected to violent extremism, revolution, mass migrations and environmental devastation. She pointed to the 2008 housing crisis as one disastrous outcome of corruption: Regulations that protected the public from abusive real estate agents, appraisers, insurance agencies and mortgage lenders were dismantled, so people were taken advantage of, she said.

Gerrymandering, or the practice of redrawing voter boundaries for political advantage, is another example of present-day corruption, one that's drawn lawsuits and ire from Wisconsin voters.

"There is no better example of rigging the system than gerrymandering," she said. "And that is an issue that I agree, no matter the political persuasion, has got to be eradicated from the American political system."

The Ebbs And Flows Of Corruption

Chayes said that corruption's prominence on the world's main stage has ebbed and flowed throughout history. The last time the globe experienced corruption like today's was in the late 19th and early 20th centuries, she said. It got quieter, though not silent, in the years between 1940 and 1980.

Ignoring or dismissing corruption as "business as usual" in the Gilded Age fueled two world wars, genocides, the detonation of the atomic bomb, a great depression and a pandemic.

"It is an incredibly dangerous phenomenon if left unchecked," she said.

In the U.S., corruption saw a turning point in late June 2016, said Chayes, when the U.S. Supreme Court handed down an 8-0 decision that overturned a conviction charge for a former Virginia governor. The governor, Bob McDonnell, had taken cash and other gifts from a pharmaceutical manufacturer, who leveraged that relationship to get McDonnell to pressure members of the Virginia executive branch into conducting clinical trials.

Chayes said in watching those events unfold, she saw the decision by the Supreme Court as an act of downplaying corruption as a serious problem. That was because the court's opinion seemed to take more issue with the fight against corruption than corruption itself, she said.

That decision was followed by an election that lasered in on the issue of corruption.

"The focus on corruption galvanized a gigantic proportion of the American electorate," she said. "And I still don't really think that the mainstream of American political elite establishment gets it."

"Somehow everyone has a really good eye for the corruption on the other side of the political divide, but they somehow get blinded when it's their own people," she said.

She added: "So long as the networks have us pitted against each other across this political divide, we're going to keep losing."

Some of the solutions Chayes endorses include having candidates sign a nonpartisan ethics pledge, or asking Americans to look at their own state's bribery, gift and conflict of interest laws.

She also advised rethinking the "defund the police" mantra that's become popular in the wake of recent Black Lives Matter protests. Police are involved in violent events, but they also investigate nonviolent crimes like corruption.

"Nonviolent drug offenses might be considered to be not very dangerous to society, but nonviolent corporate crime and corruption is unbelievably dangerous," she said.

What's important to know, she said, is that corruption is like another hallmark of Greek mythology: the Lernaean Hydra, the many-headed beast who would grow two more heads where one was cut off. Just getting one corrupt official out of office or prosecuting one case won't kill the beast.

"It's going to take all of us doing all of the different things that we're good at doing," she said. "And frankly, I actually think it's going to take some defections from the moneyed classes." 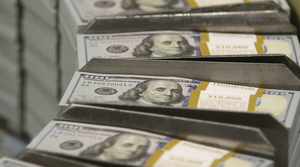 When left unchecked, corruption can infect every corner of a country's government and economy. An author and former NPR reporter talks with us about her new book tracing the history of corruption in America, the impact it has on everyday life, and how people can fight back.