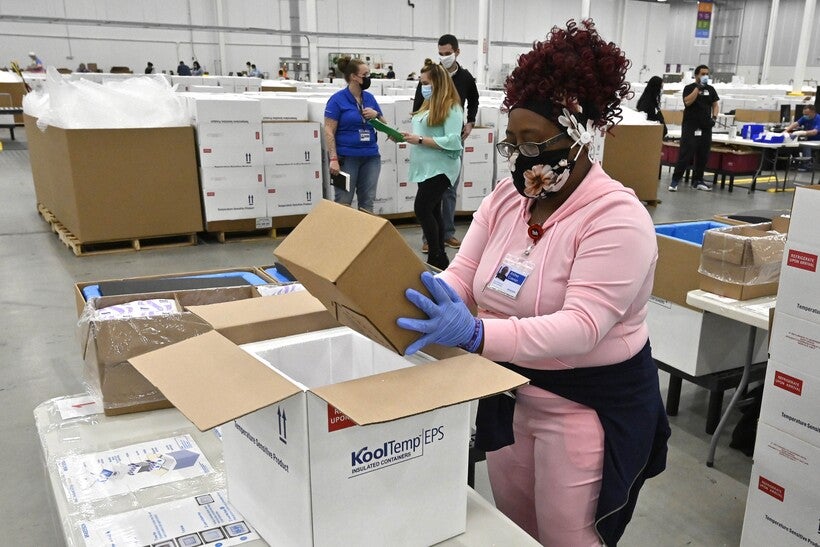 An employee with the McKesson Corporation packs a box of the Johnson & Johnson COVID-19 vaccine into a cooler for shipping from their facility in Shepherdsville, Ky., Monday, March 1, 2021. Timothy D. Easley/AP Photo

The Wisconsin Department of Health Services announced Tuesday that select Kroger stores will become part of the Federal Retail Pharmacy Program, and will receive COVID-19 vaccine doses directly from the federal government. In Wisconsin, Kroger stores include those under the Metro Market and Pick-n-Save names, which have also been known by the brand Roundy's. Previously, Walgreens was the sole pharmacy involved in this program.

Kroger stores have 67 pharmacies in Wisconsin. They'll receive a total of 2,340 doses during the first week from the federal government, in addition to 1,552 doses from the state.

Meanwhile, new reports of COVID-19 cases are holding steady in Wisconsin, based on the latest data published by the DHS.

There were 2,090 negative tests reported Tuesday.

As COVID-19 cases in Wisconsin have continued to decline, more of the state's residents are being vaccinated against the disease.

A total of 1,466,654 doses of the coronavirus vaccine have been administered in Wisconsin as of Tuesday, with 55.4 percent of Wisconsinites age 65 and up receiving at least one dose of the vaccine so far.

DHS reported 928,958 Wisconsin residents had received at least one dose, representing 16 percent of the state population. As of Tuesday, 505,123 people in Wisconsin, or 8.7 percent of the population, have received both shots, completing the vaccination series.

Increasing rates of vaccination have provided a sense of hope after a yearlong pandemic that has claimed the lives of 6,440 people in Wisconsin. There were 28 new deaths from COVID-19 reported Tuesday.

Other DHS data from Tuesday include: