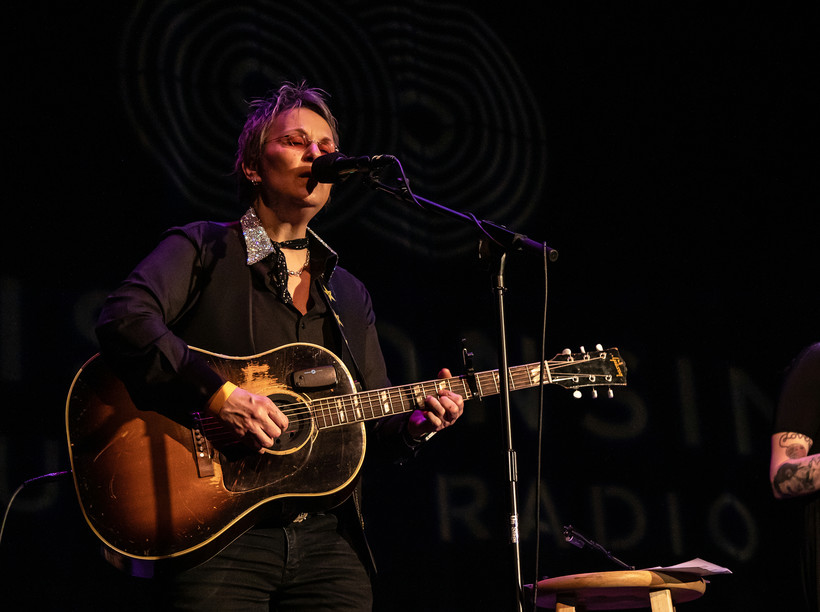 Mary Gauthier Works Her Musical Alchemy For Herself And Others

Grammy-Nominated Musician Shared Some Of That Alchemy At This Year’s Simply Folk Shindig
By Dan Robinson
Share:

"This alchemy, that there's a thing about songs that can't fully be explained," said singer and songwriter Mary Gauthier, "You can turn your worst moments into something beautiful that not only saves you, but people in the audience come and tell you that it saved them too."

Gauthier performed with her band at WPR's 40th anniversary "Simply Folk" Shindig in June, in the midst of a busy tour around her 2018 album, "Rifles and Rosary Beads." Nominated for a best folk album Grammy award, Gauthier co-wrote the songs with members of the military and their families, helping them work through the trauma of their experiences with war and conflict.

Gauthier, however, has been using music to deal with trauma her whole adult life. "I gravitated to songs and songwriting as a way to save my own life," she explained during an interview before the Shindig.

Gauthier was born in New Orleans in 1962 to a woman who wasn’t married. Her birth mother placed her in an orphanage.

"I spent a year in an orphanage and was adopted and all kinds of things fell out from that and not being held for a year. Being in an overcrowded orphanage really impacted me in ways that I had no idea and was unprepared for. And my adoptive parents were unprepared as well. Nobody told them, 'you're adopting a traumatized infant.'"

During her youth, Gauthier struggled with drugs and alcohol, at one point getting arrested for drunk driving. It was at that point she was able to get sober.

"I needed something to hang my life on and it couldn't just be the accumulation of capital. I had to do something that meant something to me in a purposeful way. Songwriting was exactly the thing that I needed and I found songwriting really quickly," Gauthier said.

For the last few years, Gauthier has been working with veterans and their families during songwriting retreats, helping them turn their stories and experiences into songs. "Rifles and Rosary Beads" came out of these encounters.

Reflecting on this songwriting experience, Gauthier said, "We know this story. We've heard it from every generation that's come home from war. Soldiers don't talk. Well, they do talk. If you have the ability to listen and the ability to bear witness and take what you hear and repeat it back in a way that they feel heard, they will talk."

"I have this magic six-string machine that takes pain and turns it into something beautiful," Gauthier added. "I don't exactly know how to explain alchemy. I mean, how does coal become diamonds? You know, pressure, man. A lot of pressure, a lot of pressure. But that's what happens with trauma and songs. It's transformative in its highest form."

Gauthier has spent her adult life exploring not only the trauma that she and others have experienced, but the story of struggle, perseverance, resilience and peace that is possible after trauma. That has been her story.

Even though her story is not over, Gauthier is thankful in the telling of it, whether in words or in music.

"Right now I'm kind of at peace," she said. "I hate saying it because I'm asking for trouble. But I wake up feeling grateful most days."

Click the play button above to hear Mary Gauthier's performance at the 40th Anniversary Simply Folk Shindig on June 7, 2019 in Madison, WI.