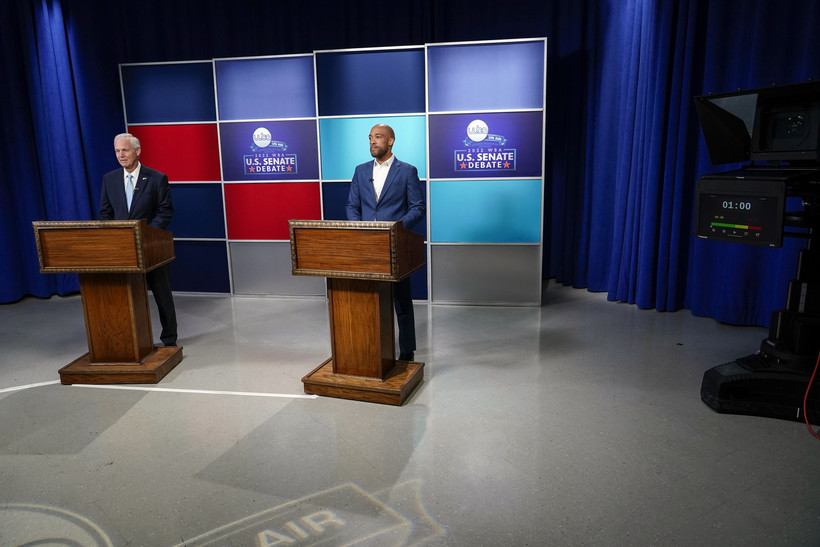 Many voters are worried about climate change, but it's not top of mind in Wisconsin's US Senate race

Wisconsin voters say they’re concerned about climate change — but it's far from the forefront of issues in Wisconsin’s U.S. Senate race.

"What we need to do is reduce carbon emissions. What we also need to do is move towards a clean energy economy and make sure Wisconsin is in the driver's seat," Barnes said. "Eighty percent of the world’s solar panels are built in China. We can do a build on those right here in Wisconsin, charting the path to a clean energy future."

Republican U.S. Sen. Ron Johnson cast doubt on whether anything can be done to address the issue, saying the nation can’t afford to spend billions of dollars to "solve a problem that’s not solvable." 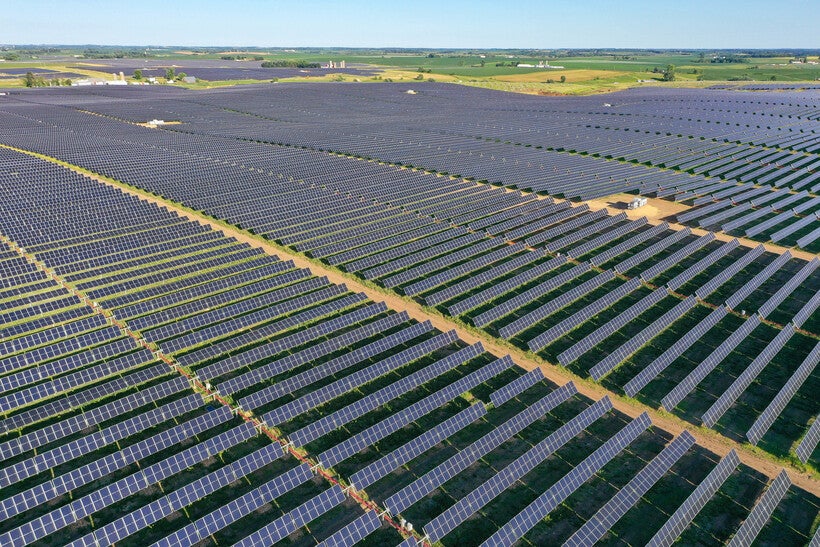 "I don't deny climate change. The question is, can you really do anything about it when China, when India — they're going to be burning fossil fuels," Johnson said. "America is going to have to burn fossil fuels. Eighty percent of our energy comes from fossil fuels right now, and that's not going to change anytime soon because wind and solar are not reliable."

The exchange was notable because, though the federal Inflation Reduction Act included historic investments to tackle climate change while fighting inflation and reducing the deficit, climate change has scarcely registered in the candidates' messaging. In recent weeks, a steady barrage of television ads have largely targeted candidates’ stances on abortion and crime.

Milwaukee resident and independent voter Anne Steinberg, 75, said she was shocked to hear Johnson say there’s nothing to be done about climate change.

"I don't feel that the issue gets enough attention for the seriousness of the crisis we're in right now," Steinberg said.

Steinberg identified climate change as her top issue in an unscientific survey conducted by the Wisconsin Main Street Agenda project. It focuses on public policy issues leading up to the November elections as part of a partnership between Wisconsin Public Radio, the University of Wisconsin-Madison La Follette School of Public Affairs and the USA TODAY NETWORK-Wisconsin. 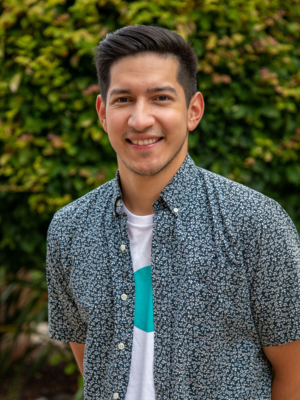 Marco Marquez, 26, wants to hear more specifics from candidates on how they plan to address climate change.
Photo courtesy of Marco Marquez

"A lot of Wisconsinites care about climate change, want something to be done about climate change, but it doesn't feel like it's the top three or top five issues that the candidates are talking about," said Marco Marquez, a 26-year-old Latino voter and Milwaukee native. Marquez organizes youth to fight for climate justice as part of the nonprofit Action for the Climate Emergency.

A September Marquette University Law School poll found 73 percent of registered Wisconsin voters are very or somewhat concerned about climate change. Even so, climate change ranked eight out of 10 issues covered by the poll. A recent Washington Post-ABC News poll found around half of registered voters think climate change is "very important" or "one of the most important" issues in congressional races this November. But again, the issue came up last of seven issues presented in the survey.

Polling has highlighted a glaring partisan divide on climate change. The Marquette poll showed 71 percent of Democrats are very concerned about the issue compared to 39 percent of Independents and 17 percent of Republicans. In an increasingly partisan era, UW-Milwaukee emeritus professor Mordecai Lee said only a narrow segment of voters remain undecided going into November.

Those voters have become increasingly crucial to candidates as Wisconsinites decided the last three partisan elections in 2016, 2018 and 2020 by fewer than 30,000 votes in races won by Gov. Tony Evers, former President Donald Trump, and President Joe Biden.

"If a politician says there are 30,000 people I need to persuade to vote for me, what do they care about? And they look at the hit parade of issues ... The reason we're not seeing very much about climate change is because it's just so low on the hit parade," Lee said.

Lee said candidates are appealing to voters’ emotions to drive them to the polls. While Barnes and Johnson present a stark contrast on climate change, Lee said it’s not an issue that gets people as agitated as others to vote.

Despite that, polling shows many Wisconsinites are worried about the issue, and candidates are loath to take a position that will antagonize them.

"What they'll do is they'll sort of muffle their position, so that it won't be quite as obvious that they're not supporting, let's say, rigorous policy on climate change," Lee said.

During Friday’s debate, Johnson said "the climate has always changed" while Barnes noted the incumbent has called climate change "bulls---."

Scores of scientists have been sounding the alarm on reducing heat-trapping emissions of carbon dioxide to limit the worst effects of climate change. During the debate, Johnson accused Democrats of driving up gas prices because of the party's "war on fossil fuels."

Lee said voters more easily see the effects of rising gas prices rather than its ties to climate change or international developments because it hits them in the pocketbook.

Groups like the Wisconsin Conservative Energy Forum have touted an "all-of-the-above" policy on energy that includes developing clean energy in Wisconsin. Scott Coenen, the group’s executive director, told WPR last year that polling shows climate change isn’t connecting directly with conservatives and highlighted difficulties connecting them to the negative effects of global warming over the long term. Coenen didn’t respond to requests for comment for this story. 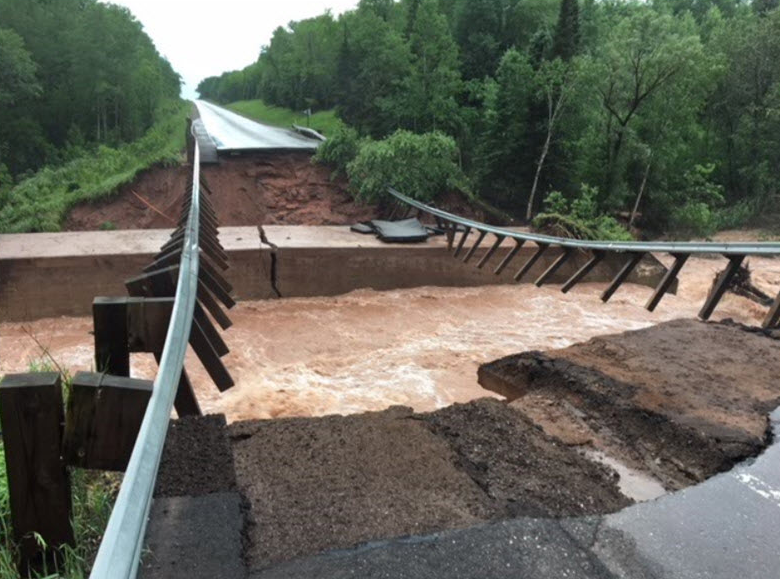 U.S. Highway 2 near Ino was washed out between County Highway G and Tomich Road for several months in 2018.
Wisconsin Department of Transportation

"When climate change wrecks harvests, makes infrastructure impassable for supply chains, that's a driver of inflation," Herscher said. "But you don't hear that a lot."

WPR also reached out to the Republican Party of Wisconsin, but a spokesperson declined to comment.

Barnes chaired Gov. Tony Evers’ Task Force on Climate Change, which presented dozens of recommendations to address the issue. He’s joined Democrats in support for bills to implement them. But the task force found both support and concern for proposals to oppose new fossil fuel infrastructure. During the debate, Barnes said the nation is too reliant on fossil fuels and needs to pursue energy independence through renewables.

Johnson voted against the Inflation Reduction Act that allocated $369 billion for lowering prescription drug prices and incentives to transition away from fossil fuels. During the debate, he said part of the money should go to address "real pollution" like PFAS rather than carbon dioxide.

Related Links:
Wisconsinites have a negative view of Sen. Ron Johnson. It may not hurt his reelection chances.
After months of attacks, Mandela Barnes looks to reframe Senate campaign