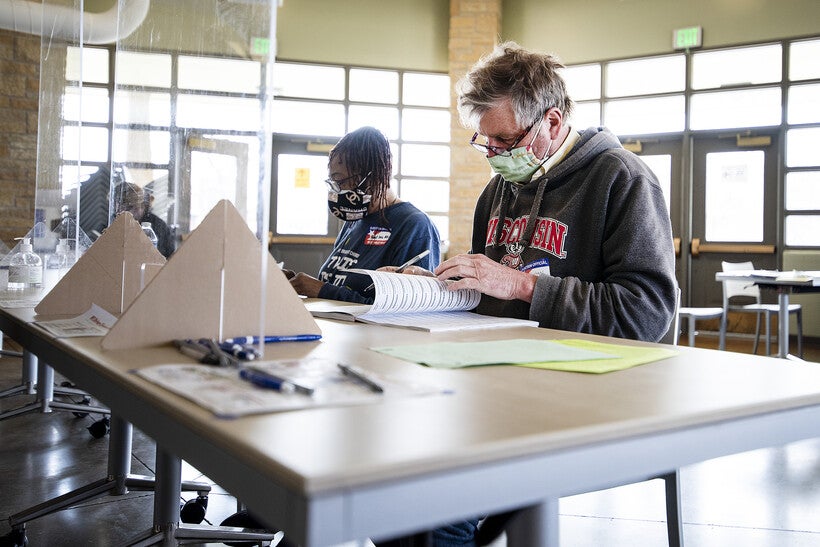 Elections workers in Madison could soon have an extra layer of protection from harassment if a proposed ordinance passes the Madison Common Council.

Rhodes-Conway cited increasing attacks on election officials and poll workers since the 2020 presidential election and the Jan. 6, 2021 attack on the U.S. Capitol.

"Too many election officials have suffered serious threats and continued harassment just because some people disagree with the results of the last election," she said, calling the city's clerks and poll workers "unsung heroes."

"Despite the COVID-19 pandemic and an unprecedented flood of disinformation in 2020, they managed to run a safe, secure and professional election with the highest voter turnout in more than 100 years," she continued.

Referring to a survey by the Brennan Center for Justice, Rhodes-Conway said 1 in 6 local election officials have reported being threatened because of their jobs. And those threats often lead to election workers leaving the profession.

While the study was national, Rhodes-Conway said Madison election workers have been "subjected to the same reprehensible treatment," including threats and intimidation in person, by phone or online.

Those found guilty of disorderly conduct toward an election worker would be subject to a maximum fine of $1,000 — with a proposed bail of $500.

"The idea behind the disorderly conduct ordinance is to increase accountability for those who harass or threaten local election officials because of their job," Haas said Tuesday. "The proposed ordinance would give us a more effective tool to catch offensive behavior and stop it before it becomes criminal."

"The court took a safe and secure method of voting used by cities, towns and villages around Wisconsin, and states across the country, and tossed it out the window simply to legitimize fears of fraud that have repeatedly proven to be false," she said.

President Joe Biden won Wisconsin by about 21,000 votes — a margin similar to several other razor-thin statewide elections in recent years. Every review of election misconduct, including an audit by the nonpartisan Legislative Audit Bureau, has found no evidence of wrongdoing.

Approaching two years since the election, an Assembly investigation of election misconduct led by former state Supreme Court Justice Michael Gableman is ongoing. Earlier this year, Gableman threatened to jail Rhodes-Conway and other mayors if they did not comply with his subpoenas. Rhodes-Conway has said the investigation is politically motivated, and that she would answer questions publicly.

Madison isn't the first place to introduce such protections for election officials. The U.S. Department of Justice has also taken action at the federal level by creating an Election Threats Task Force. The first indictment and arrest related to the task force was on Jan. 21.

Madison’s Common Council is expected to vote on the proposals in coming months.