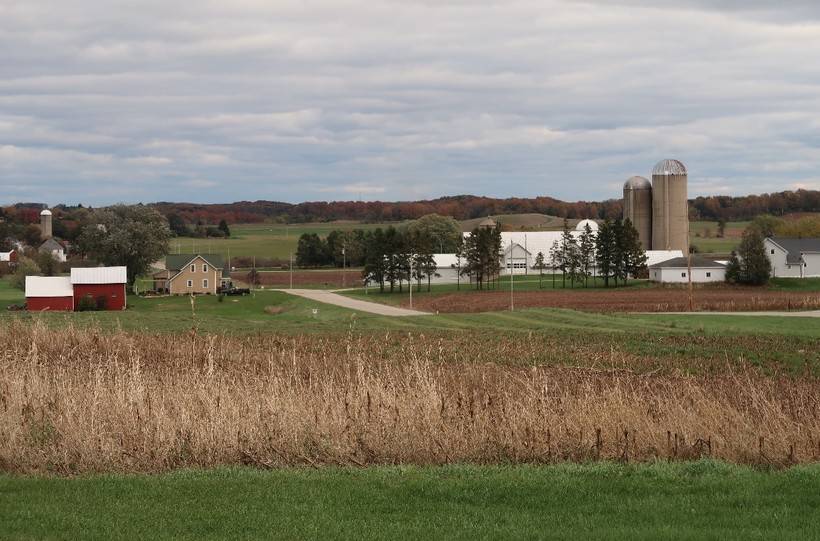 Long Road Ahead For Rolling Out Manure Restrictions In Eastern Wisconsin

Efforts are ongoing among state and county officials to work with farms on new restrictions for manure spreading that took effect in eastern Wisconsin last year that include identifying the most shallow soils over the region’s fractured bedrock.

The Wisconsin Department of Natural Resources updated the Natural Resources Board this week on the agency's progress to implement targeted performance standards across 15 counties. Farms with less than 2 feet of topsoil can't spread manure because it's more likely to seep through the region's Silurian bedrock and contaminate groundwater.

The DNR estimates around 284,000 acres of land lie in the most sensitive area, of which around 18 percent are managed by the largest farms known as concentrated animal feeding operations (CAFOs). So far, the agency has reviewed around 1,800 acres managed by CAFOs that are in compliance with the new standards, noting large farms were already prevented from spreading on the most shallow soils under permit.

Other farms might be voluntarily meeting new standards, according to Brian Weigel, the agency's deputy director of watershed management. Large farms are required to meet the restrictions as they add new fields or renew their permits.

"At the end of these five years, all of the permits should be up for renewal and have this requirement and we will be reviewing all of those for implementation consistent with the targeted performance standards," said Weigel.

Kewaunee County is among those that have dealt with polluted drinking water. A study commissioned by the DNR found the most contamination in wells where soils were thinner. The study also showed 60 percent of 131 household wells tested had signs of waste from both cows and people. But researchers have said they see higher concentrations of contamination from cows. 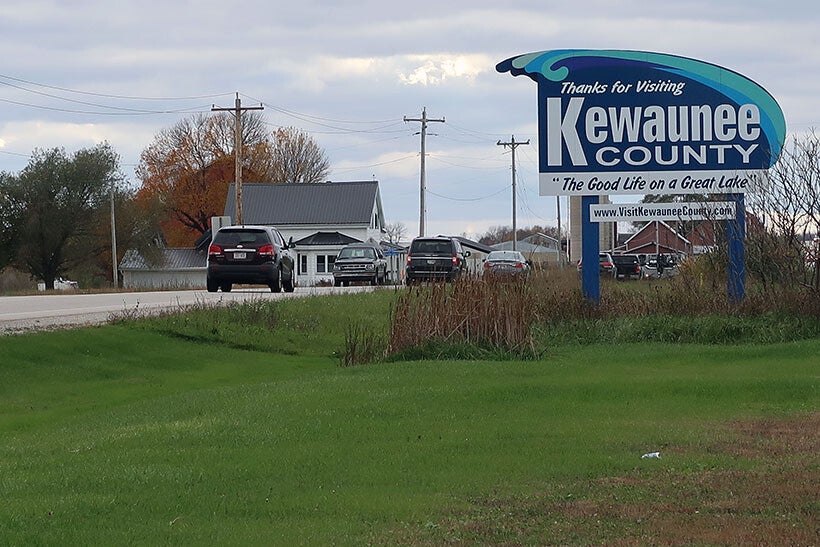 A sign reads "Thanks for visiting Kewaunee County." The county has become the poster child for water quality concerns in Wisconsin. Danielle Kaeding/WPR

Kewaunee County conservationist Davina Bonness said the county has adopted the new standards under ordinance so it doesn't have to wait for the county's 16 CAFOs to renew permits before putting new restrictions into place. Staff have also been probing soils on fields with farmers to determine the most sensitive areas.

Bonness estimates around 80 to 90 percent of the county's roughly 130 dairy farms are no longer spreading on the thinnest soils. She said land has been removed from manure application, but they've also discovered areas where soils are thicker.

The county hopes to determine all areas with the most shallows soils by next June. But Bonness said it could take years to implement new standards with the amount of work to be done in the face of limited resources and funding. Still, she said they're working with all farms on the new restrictions and rates at which they can spread — regardless of size.

Yet, smaller farms might have a more difficult time meeting the new standards, according to John Holevoet, government affairs director with the Wisconsin Dairy Business Association.

"Some smaller farms who maybe only have so many acres and mostly all their acres have relatively low topsoil on top of bedrock, they might end up in a situation where they really struggle to find an adequate land base to apply the manure they're producing," said Holevoet.

He said farmers are doing the best they can to bring themselves up to speed on the new standards, but part of the challenge is that information and research on soil depths in the region is lacking or outdated.

The DNR is working with state agencies to develop improved soil maps. Some don’t provide the level of scale or detail necessary for farmers to make decisions, according to Maureen Muldoon, a hydrogeologist with the Wisconsin Geological & Natural History Survey. She added some affected counties are relying on a soil map that hasn’t been updated since the 1970s.

"I think some of the frustration farmers might have is like 'Hey, I know that the depth to bedrock in my field is different than what's shown on these existing maps,'" she said.

Muldoon is part of the team that’s developing standards on how to determine depth to bedrock in the region as part of the Wisconsin Standards Oversight Council process, which will allow farmers to verify soil depths that may be inaccurate on existing maps. Those technical standards for implementing the new restrictions are still being drafted and aren't expected to be complete until early next year.

Weigel said cost-sharing will be available to farms once those technical standards have been adopted.

While farmers might be experiencing frustration implementing the standards, others have expressed their dissatisfaction with the new restrictions, including Lynn Utesch with the citizen group Kewaunee Cares.

"They're not even close to going far enough," said Utesch.

He pointed to manure spills that have occurred this fall, arguing not much has changed since the restrictions took effect.

Utesch would like to see farms move away from injecting liquid manure into soils to better avoid groundwater contamination. He’d also like to see more study on the volume of manure application, composting and adequate manure storage as the area has seen more frequent, intense rains.

The DNR notes that weather conditions and application rates are among factors that can play a significant role in impacting groundwater. DNR officials said they will support groundwater quality monitoring in the 15-county area beginning in 2023 to gauge the effectiveness of the new standards.