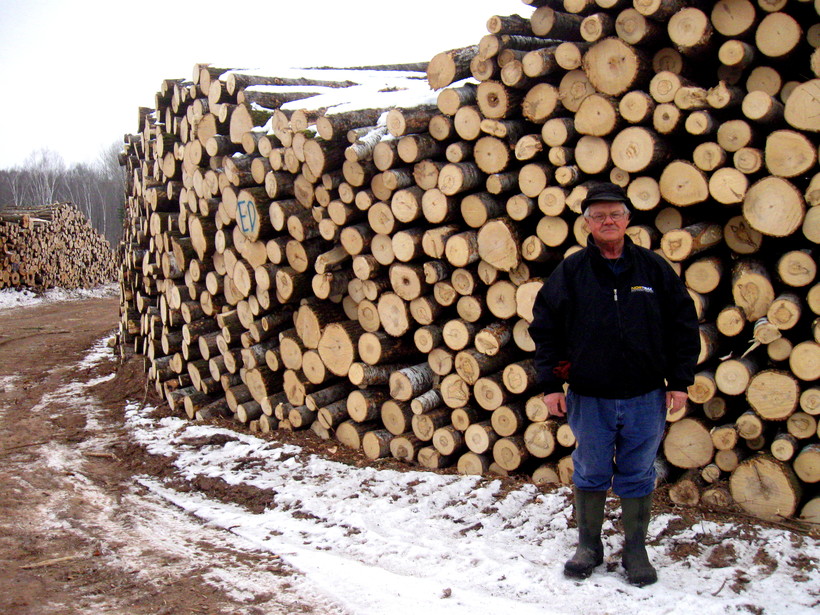 Max Ericson, in front of some Aspen pines he'll soon ship to a sawmill in Hayward. Photo: Danielle Kaeding/WPR News.

He’s concerned, he says, because demand for wood in Wisconsin has increased, and stumpage prices — the price a land owner or manager charges for the right to harvest wood on their property — have risen to around $25 a cord. When Ericson recently paid to cut trees on a plot of land in Douglas County, it ended up costing him roughly a quarter-million dollars.

Like many other Wisconsin loggers, Ericson now says there needs to be more trees available to harvest in order to keep the forest products industry above water.

“We need to have more wood put on the markets so that the stumpage prices go down so that there’s enough raw material for these mills to survive,” said Ericson.

There’s plenty of forest to cut. Ericson says the problem is management.

“The county does a good job of managing their forests,” said Ericson. “The state does a better job than the feds, but the feds don’t manage anything right.”

The U.S. Forest Service manages 1.5 million acres of the Chequamegon-Nicolet National Forest in northern Wisconsin. Around 864,000 acres can be used for timber cuts.

Forest spokeswoman Hilary Markin said they’re trying to balance all forest uses to satisfy a number of interest groups, “from the environmentalist groups from the recreation piece from the timber industry piece, with the goal of achieving our forest plan objectives.”

But Don Peterson, administrator of the Wisconsin Master Logger certification program, said the national forest land that's been approved for cutting is unavailable. Around 732,000 cords have been cleared through the National Environmental Policy Act for the forest’s timber sale program.

“If you just look at that ownership alone, properly managed, it could have a huge impact on the industry,” said Peterson.

Markin acknowledged there's a lot of wood that can be harvested, but said that actually making it available to loggers is a complicated process.

Markin said shrinking federal budgets are playing a role in what they can manage. Around 158,000 cords were sold for timber harvests in 2013. She said they’re hiring staff with the goal of increasing sales up to 10 percent in the next two years.

The state, for its part, sold about 297,000 cords in 2013 on the one million acres they manage — almost double what the Chequamegon-Nicolet National Forest sold. Wisconsin Department of Natural Resources forest products specialist Steve Hubbard said the agency is considering all timber harvest options.

“Whether it’s managed forest law property or state property, I think there’s been an increased effort to identify how harvesting fits into the appropriate management of those forests,” said Hubbard.

County forests sold three times as much wood as the state last year, but they also manage twice the amount of land. Jane Severt is executive director of the Wisconsin County Forests Association, which represents 29 counties that collectively manage 2.4 million acres of forest.

“We have a very strong forest products industry here in Wisconsin,” said Severt. “It’s the number two industry in our state after agriculture. It’s very important to professionals who want to manage forests sustainably and keep them in healthy condition.”

Severt said the state awarded a $600,000 grant last year for a forest practices study that includes an examination of the state’s timber supply. She said research will be used to help the industry remain profitable while preserving the environment and recreational uses.