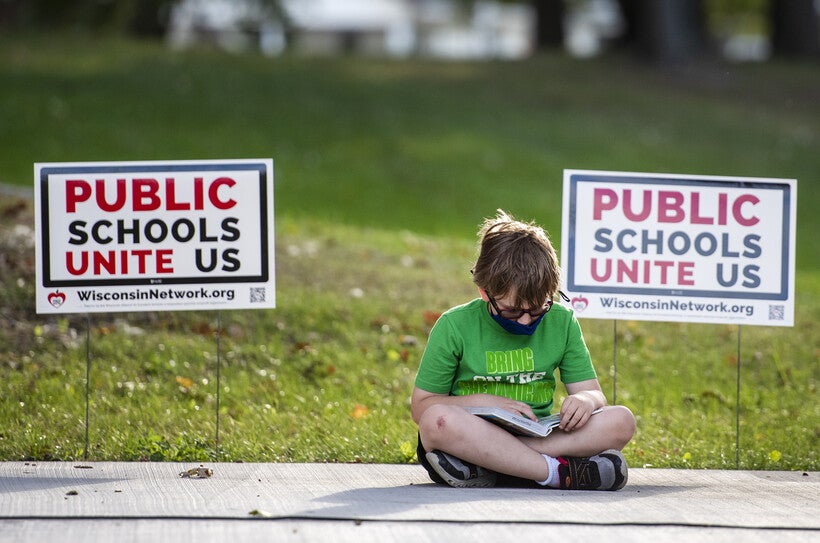 Moshe Levy, a second-grader at Kenosha School of Technology Enhanced Curriculum, reads next to signs at a press conference Tuesday, Sept. 14, 2021, in Kenosha, Wis. Angela Major/WPR

A group of parents, teachers, school officials and community organizations gathered in a Kenosha park Tuesday evening to plead with parents to send their kids to school this Friday.

In response to an August vote by the Kenosha Unified School District Board to require masks for all students and staff, some parents have said they plan to keep their kids home on Sept. 17, the third Friday of the month.

The third Friday in September is when Wisconsin schools count the number of students present in school to calculate their enrollment, which is then incorporated into the three-year rolling enrollment average that helps determine how much money a school district gets in per-pupil funding, as well as their revenue limits — the amount of money school districts can take in through a combination of state money and local property taxes. For the 2021-2022 school year, schools received $742 per student based on their three-year enrollment average. In Kenosha, that was about $15 million.

"Keeping students out on the third Friday count harms our entire community, and causes long-term damage to our children's education," said Kendra Koeppen Mulwana, executive director of the Kenosha Education Association, at the Tuesday night event. "The bottom line is that kids in the classroom means dollars in the budget. Our kids are counting on us, and in order for us to give them the best educational experience possible, we have to count the kids." 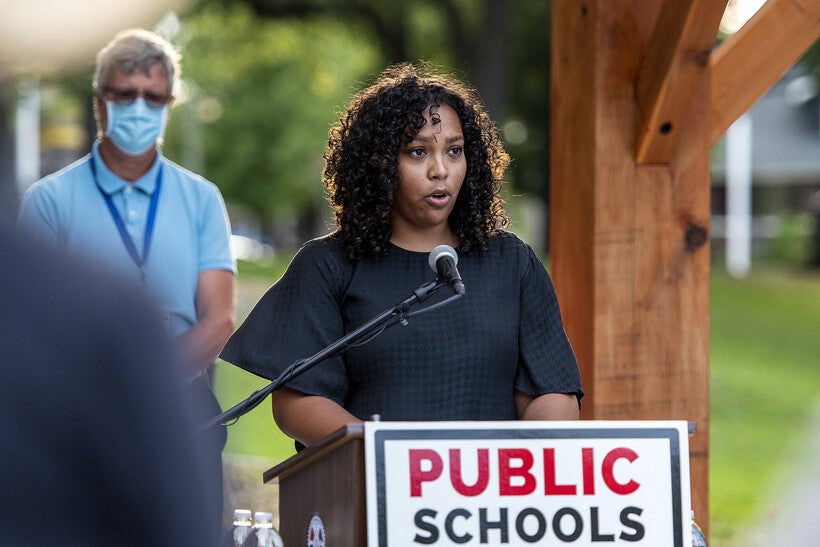 The school board's August vote, a response to rising cases and the threat of the delta variant, reversed a June decision to make masks optional.

In response to the mask requirement and other complaints, a group of Kenosha residents have started a recall effort against school board president Yolanda Adams and announced plans to challenge sitting board members who are up for reelection in April. Some dissatisfied parents posted in a Facebook group about keeping their kids out of class on Sept. 10 as part of the nationwide "Walkout USA" protest against mask and vaccine mandates in schools, while others said they were waiting for the third Friday count day.

According to the state Department of Public Instruction, students can be included in the enrollment count if they are present in school, or if they're absent but meet certain requirements. Schools can count an absent student if they are enrolled, remained a resident during their absence, and have been present for instruction on at least one school day that happens before the count and one school day after the count. If students absent on the count day don't return before a district files its enrollment report, but later meets the attendance requirements, the district can submit an amended report to DPI.

Lisa Guerrero, a district parent and co-founder of Parents for Safety and Equity and the Education Justice Coalition, said diminishing the district's budget would harm kids over the long term.

"If any of the sports programs were limited in resources, I think we'd have parents out in droves to do the right thing," she said. "Unfortunately, when you talk about curriculum, sometimes they don't understand that significance."

Guerrero and Koeppen Mulwana were joined by representatives from Forward Latino, Leaders of Kenosha, the school district and the NAACP Kenosha branch. 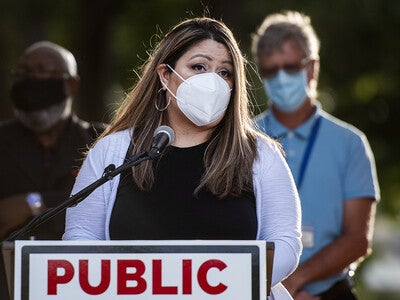 Lisa Guerrero, a parent with children in the Kenosha School District, speaks at a press conference Tuesday, Sept. 14, 2021, in Kenosha, Wis. Angela Major/WPR

"The reality is that there is no perfect solution, which is why we continue to focus on students and staff, with their safety and success in the forefront of every decision we make," said Tony Garcia, with Kenosha Unified School District. "Let's keep our students as a priority and support their learning."

District communications director Tanya Ruder said the district didn't poll parents about the switch to universal masking in August. It had surveyed parents before the June vote to make masks optional, but Ruder said that information was outdated by the time the delta variant caused a resurgence of cases and an increase in cases among children.