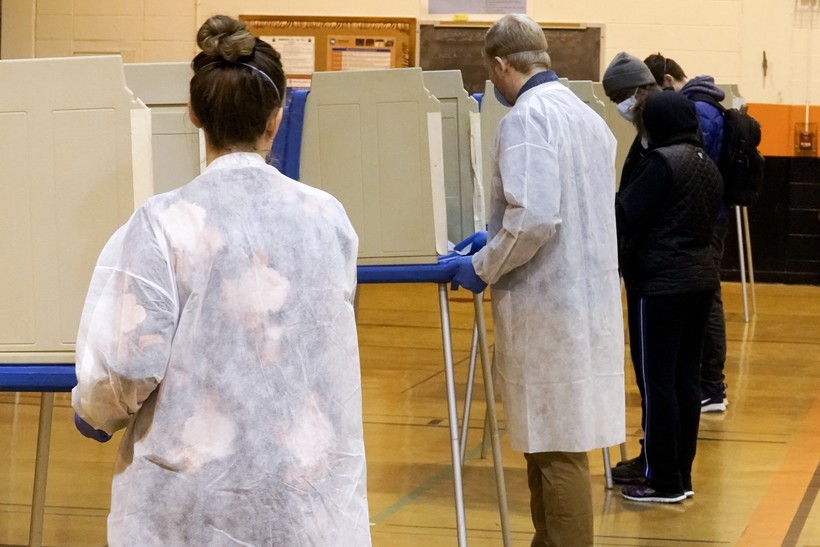 Workers wipe down tables after each person votes at Riverside High School for Wisconsin's primary election Tuesday April 7, 2020, in Milwaukee. The new coronavirus causes mild or moderate symptoms for most people, but for some, especially older adults and people with existing health problems, it can cause more severe illness or death. Morry Gash/AP Photo

Wisconsin clerks say they did their best to protect poll workers and voters from the new coronavirus during Tuesday's election. Along with state-supplied masks, gloves and sanitizer, some local governments took additional measures to keep people safe.

Despite a battle Monday between Gov. Tony Evers and Republican leaders in the state Legislature over whether to delay the election and conduct all voting by mail, Kenosha City Clerk Debra Salas said their election plans never changed.

"The changes from Madison at the last minute, everyone handled that really well," Salas said. "So, I think all of us are really glad it's over and that it went as well as it did."

"In addition to the supplies we had, our parks department employees constructed Plexiglas barriers, large barriers, that went in between the poll worker crew and the voters," she said.

On Tuesday, Wisconsin Elections Commission spokesperson Reid Magney said when they developed voter training, the Centers for Disease Control and Prevention hadn't yet recommended face masks as a way to prevent the spread of COVID-19. Therefore, he said the commission's plan was to send alcohol-based hand sanitizer, spray bottles, wipes and paper towels to seven distribution centers across the state where local clerks picked up the supplies.

"It wasn't something that we had anticipated, but it was something that was made available through the state Emergency Operations Center that they included with our other supplies that we shipped," said Wolfe.

That shipment included surgical masks but also some N95 masks, which provide greater protection against viruses and have been hard to come by for some hospitals, that were to be passed on to local health departments instead.

"We put out some advisories to (clerks), too, saying they should double check their supplies to make sure that they did not have any of those because they're, of course, needed by health care professionals," Wolfe said. "And so, those were then given, I believe, to the county health departments so that they could give them to the people that needed them."

Aside from masks and gloves, some municipalities outfitted poll workers with medical gowns.

Pictures posted to Facebook on Tuesday by Assembly Speaker Robin Vos, R-Rochester, showed him working at a drive-thru voting site in the city of Burlington wearing a protective gown, gloves, surgical mask and glasses. The images drew criticism from people, including U.S. Sen. Tammy Baldwin, D-Wis., who said he was wearing protective equipment needed by health care workers after refusing to postpone the election the night before.

Vos tweeted Wednesday that all workers at the Burlington drive-thru voting site he volunteered at were wearing gowns, masks and glasses or face shields. In an email to WPR, Burlington city administrator Carina Walters confirmed all poll workers in the city wore the same protective equipment, which was provided by the Racine County Emergency Operations Center and the city fire department.

Poll workers in Milwaukee, which reduced the number of its polling sites from 180 to five ahead of Tuesday's election, also wore gowns, masks and gloves, according to Milwaukee Election Commission Executive Director Neil Albrecht. The reduction in polling places left some voters in the city waiting in line for hours before getting a chance to vote.