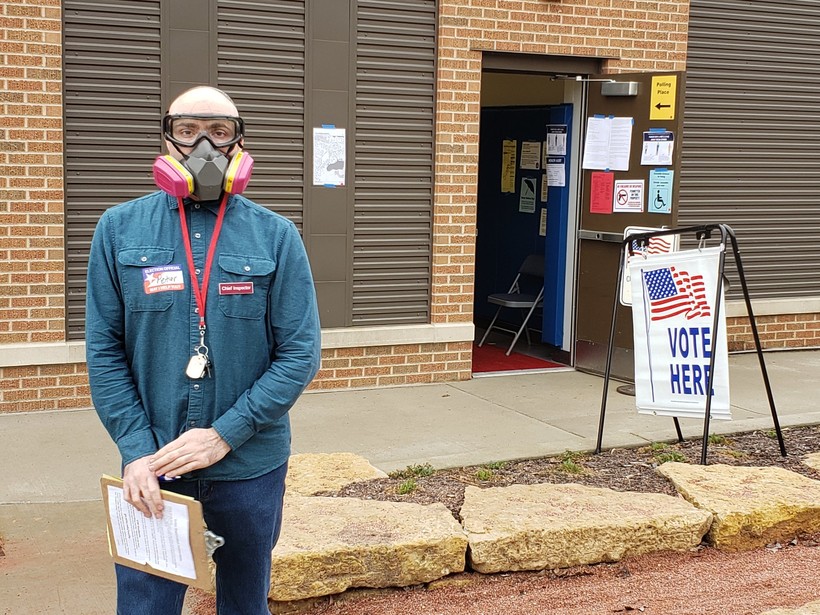 Peter Quinn, 38, is a chief election inspector at a ward on Madison's west side. Tuesday he worked the polls wearing a mask to protect both himself and others amid the COVID-19 pandemic on April 7, 2020. Shawn Johnson/WPR

Wisconsin Heads To The Polls Amid Coronavirus Pandemic

Wisconsin voters headed to the polls Tuesday in an election unlike any ever seen before in the state, with officials and voters alike contending with new rules and procedures spurred by the COVID-19 pandemic.

Polls officially closed at 8 p.m. Tuesday, but voters in different parts of the state, including in Milwaukee and Green Bay, remained in long lines to cast their ballots, and final election results aren't expected to come until early next week.

Tuesday’s vote came after weeks of legal tumult and partisan fighting over whether the election should proceed as the new coronavirus spreads in Wisconsin.

On Monday, Gov. Tony Evers attempted to push back the election until June with an emergency order, but the Republican-controlled state Legislature immediately made an appeal to the state Supreme Court, which ruled 4-2 to strike the order down in just a matter of hours. GOP lawmakers opposed delaying the election, saying it would leave vacancies in important local offices across the state.

Voters were tasked with weighing in on the Democratic presidential primary, a state Supreme Court race and a proposed amendment to the state constitution. There were also thousands of local offices on ballots across Wisconsin, including county executives, county board seats, and mayors. 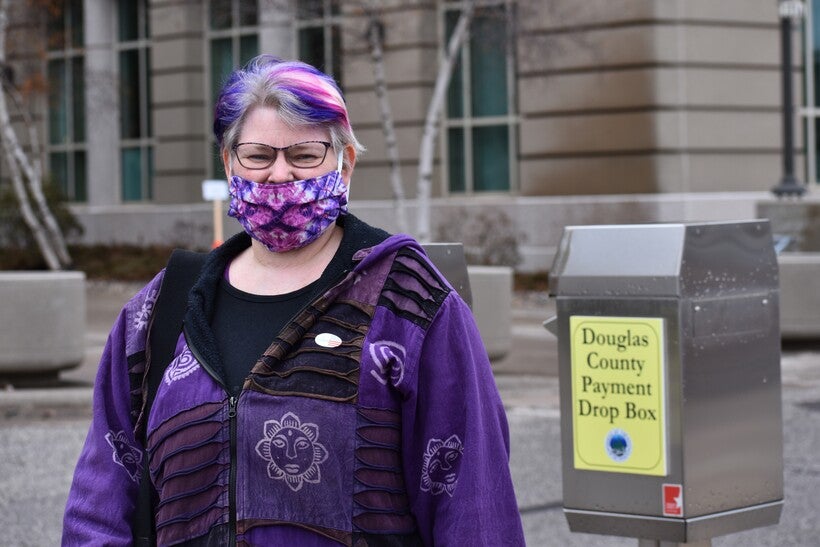 Superior resident Jo'Elle Galo votes in person on Election Day on April 7, 2020, but she's frustrated the election wasn't postponed. "I think our governor was doing what he could do to protect people in the whole state, but no one would listen to him or work with him," said Galo. Danielle Kaeding/WPR

In-person turnout at the polls was expected to be lower than usual, as many voters opted to vote by mail and others have expressed concerns about the risk of exposing themselves to the coronavirus at crowded polling places.

Still, in Green Bay, voters waited in long lines, some at least four hours, to cast their ballots.

Beth Ferrier, 62, voted at Green Bay East — one of the city's two polling sites this Election Day. Green Bay normally has 31 polling places. Many people in line were wearing protective masks and many were in good spirits.

"If you've been to the grocery store, there's no reason why you can't go out and vote," Ferrier said. "We can be scared all we want, but we can't be silenced, so we need to vote." 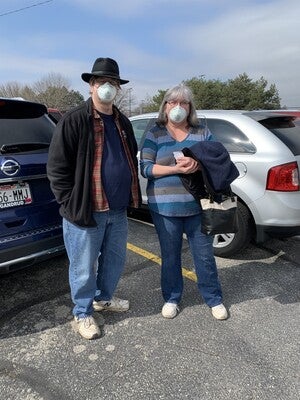 Beth Ferrier and her husband are pictured outside their Green Bay polling place on April 7, 2020. Megan Hart/WPR

Ferrier said everyone at the polling place was "minding their spaces" and practicing social distancing. She said she and her husband were still able to chat with the people in line near them.

"This is Wisconsin, everybody's nice right?" she said.

At the same site in Green Bay, Mary Lou Miller, who is in her 80s, left the polling place after seeing the long line.

"I thought this would be a snap," Miller said. "I'll walk in and stand in line for 15 minutes. I had no idea."

She said she planned to come back later in the afternoon to vote.

"I don't live that far away, it's no biggie, and I really do want to vote," she said.

In Madison, poll worker Henny Regnier, 62, said she wished the election had been postponed, but once it was happening, she felt an obligation to help.

"I'm over 60 and it irritates me that we're putting ourselves at risk to come and exercise our civic duties and I just think that's wrong," Regnier said. "So everybody who can, shows up and does everything they can. But I think it was a very bad decision."

Madison voter Steve Klaven, 65, said he was worried that holding the election in the middle of a pandemic would drive down turnout.

"I know I'm in the higher risk group and I felt like it was just really important to be here and to exercise my right to vote and to counteract voter suppression that I think is going to take place as a result of this," Klaven said.

"The experience of voting is inspiring," Klaven said. "There are a lot of people at risk in there volunteering their time, and I honor them."

In Superior, about 80 people had voted in person at the city's government center as of Tuesday afternoon. The polling place had about a half dozen poll workers and only a handful of voters waiting to cast their ballot. Plexiglass screens separated some poll workers from voters and some workers wore masks.

Superior resident Jo'Elle Galo wore a mask while casting her vote. She said she was frustrated the election wasn't postponed.

"I'm immunosuppressed. I had three surgeries this last year and so it's depleted me," she said. "And my granddaughter was a (premature baby), and I take care of her because her mom is a nurse in Duluth. This could be deadly to her, so I go out as little as possible to keep her safe."

At another polling location, about a dozen people trickled in before noon to vote in person at the Billings Park Community Center in Superior. By midday, there were 163 people who had already come by to cast their ballot, according to poll worker Kathy Izzard. She donned a mask and gloves along with several others who had dropped by to vote. Many of those who had voted were already registered, said Izzard.

"That's unusual for an election like this," she said, noting they typically see new voters register during a presidential election. 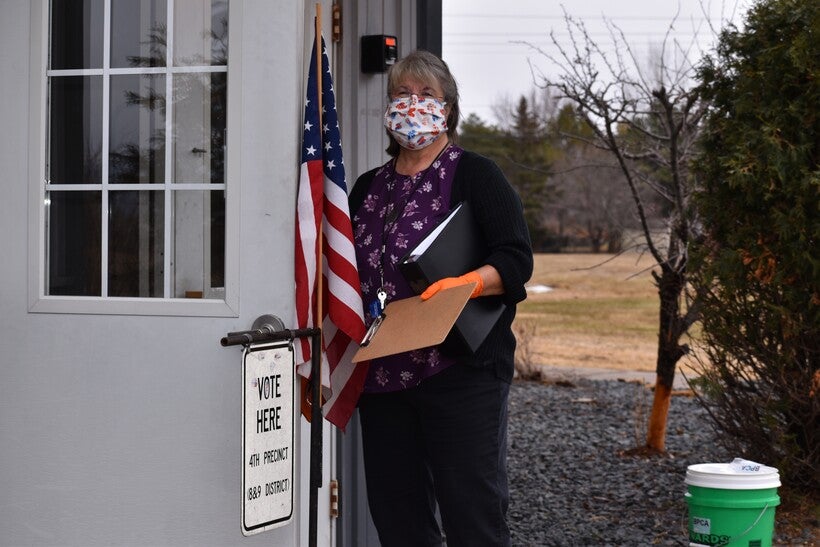 Kathy Izzard, donning a mask and gloves, has been helping people vote at the polls at the Billings Park Community Center in Superior on Tuesday, April 7, 2020. She said her mask was red, white and blue for the occasion. Danielle Kaeding/WPR

In La Crosse, which consolidated 13 polling locations across the city into eight, voters were clipping through lines at a good pace at around 11 a.m.

Heather Bach, who lives in Town of Shelby, said she had a hard time figuring out where her polling place was amid all the changes.

Bach said she was already frustrated with the federal government's response to the pandemic, but her voting experience added local, county and state government to that list.

"This shouldn't have come as a surprise," Bach said. "Where was their disaster preparedness plan?"

Mark Huebsch was the third voter of the day around 7:30 a.m. He said he was torn on the question of whether the election should have been postponed, but his main concern was for health in larger cities.

"It just feels more like doing your civic duty if you do it in a bunch of people," Heather Eldred said.

I asked a woman outside a polling place on Wausau's west side whether she had thought about voting absentee.

I asked her how she was feeling. She burst into tears. "I don't want to talk about it." Then she went in to vote.

In Wausau, retired worker Brian Sodke paid $10.50 in cab fare to get to his polling place on the city’s west side. He said he had "no concerns at all" about in-person voting.

"The fake news has got everybody so scared," he said.

In a stark example of the changes the COVID-19 pandemic has imposed on this election, Milwaukee opened only five polling places in the whole city Tuesday — normally, it has 180 polling sites. At around 8 p.m., hundreds of voters were still in line waiting to vote.

Scene at Riverside one of five polling places open in Milwaukee,compared to typical 180. Line wraps around building and through park. People are angry. pic.twitter.com/WmkqWJE4Th

According to Neil Albrecht, executive director of the Milwaukee Election Commission, some voters in the city were waiting two hours to cast their ballots. Between 80 and 100 poll workers are working the city's five polling places. Albrecht said Milwaukee requested 250 National Guard soldiers to help staff the polls in the city and 170 showed up. According to the Wisconsin Elections Commission, 264 National Guard soldiers served at polling places all across Milwaukee County.

On Tuesday morning, Caroline Hildebrand waited outside Riverside High School on Milwaukee’s east side to cast her ballot. Hildebrand has asthma, making her more vulnerable to becoming seriously ill if she contracts COVID-19. Hildebrand said she requested an absentee ballot weeks ago but never received it.

She said she contacted the Wisconsin Election Commission last week. She was told she would be sent a second ballot, but never received it.

"Frankly, I’m disgusted that the courts and the leaders in charge still allowed this election to go on as planned," Hildebrand said. "I think it’s a massive public health risk and believe thousands of people are going to be disenfranchised for arbitrary reasons."

In Milwaukee, 45,000 absentee ballots still had not been returned as of Monday night, according to Albrecht.

About half of the voters at Riverside High School wore masks. Most stood several feet apart from each other. One man wore a sign taped to the back of his black leather jacket that said, "Back up, don’t be all up on me."

At Washington High School, on the city’s west side, Sharron Elliott stood in a line nearly as long as the line at Riverside. Elliott said she requested her absentee ballot on March 3, but never received it.

"So you are forced to come here," she said, adding that she thought about not voting, but couldn’t do it. "This to me seemed like a voter suppression ploy. Seemed like a way that Republicans could keep more power."

According to the Wisconsin Elections Commission, 1,282,762 people had requested a mail-in ballot as of Tuesday morning. Only 864,750 of those ballots had been returned at that time. Turnout in Wisconsin’s last presidential primary in 2016 was about 2.1 million voters.

According to the commission, 9,388 ballot requests hadn't been recorded as fulfilled by Tuesday morning. That means those voters may not receive the ballots in time to return them by a deadline set in state law.

All ballots had to be delivered to election officials by 8 p.m. Tuesday or postmarked Tuesday in order to be counted. Some clerks set up dropboxes in their area to collect ballots. Clerks have until Monday, April 13 to receive the ballots. The six-day buffer after the election was implemented by a federal court to accommodate ballots mailed on Election Day and delays in the postal service.

Superior has a drop box for absentee ballots outside the city's government center polling location. The city has encouraged absentee ballots and curbside voting for Tuesday, April 7, 2020. Danielle Kaeding/WPR

A number of voters across the state have raised concerns that requested ballots have never materialized at their homes and the wouldn't have the opportunity to vote, unless they braved polling places in person.

Requested 3/26, not received. Wife received hers yesterday (requested after 4/2).

My wife and I ordered our ballots on March 17th through the website. The website said they were mailed on March 23rd, we never got them.I called the Oshkosh City Clerk office Friday. They had me email them a request to cancel the first ballots and then request new ballots.

Gov. Tony Evers issued a statement Tuesday commending voters for heading to the polls and urging them to be safe.

"I am overwhelmed by the bravery, resilience, and heroism of those who are defending our democracy by showing up to vote, working the polls, and reporting on this election," Evers said. "Thank you for giving our state something to be proud of today."