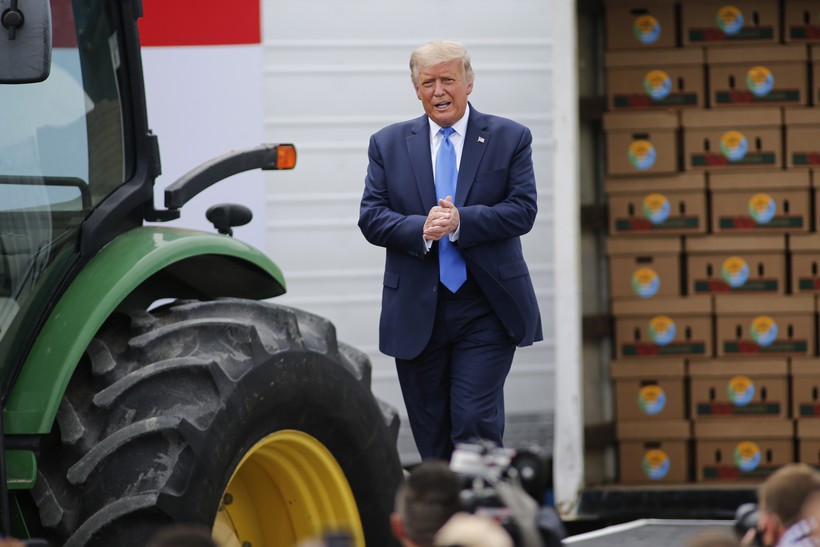 Some Wisconsinites getting food through a new federal program are finding a letter from President Donald Trump in their boxes of vegetables, cheese and chicken nuggets. Democrats say the letter is illegally politicizing the assistance program, and its inclusion has created headaches for nonprofit organizations that are legally required to be nonpartisan.

The U.S. Department of Agriculture's Farmers to Families Food Box program is part of the government's response to COVID-19. The program serves both families who've hit hard times in the pandemic and U.S. farmers who've lost customers with the closure of schools and restaurants. The government buys food from farmers, then distributes boxes of produce and other foods through local food banks and pantries. According to the USDA, millions of Americans have received the boxes, with 8.2 million distributed since May.

In late August, some of the boxes, including those distributed in parts of Wisconsin, included a letter from Trump. On White House letterhead, Trump wrote: "As President, safeguarding the health and well-being of our citizens is one of my highest priorities. As part of our response to the coronavirus, I prioritized sending nutritious food from our farmers to families in need of assistance."

The letter also includes some public health best practices for avoiding COVID-19 spread, including "protect the most vulnerable individuals" and "practice social distancing and consider wearing a face covering when in public."

Though it doesn't directly mention Trump's reelection campaign, some critics see its inclusion as an election year ploy to take credit for the assistance program. On Aug. 14, a group of lawmakers sent a letter to Agriculture Secretary Sonny Perdue claiming that the letter violated the Hatch Act, which prohibits political activity by executive branch employees, and urging the USDA to stop distributing the letter.

"Using a federal relief program to distribute a self-promoting letter from the President to American families just three months before the presidential election is inappropriate and a violation of federal law," said the letter, authored by U.S. Reps. Marcia Fudge of Ohio and Bobby Scott of Virginia, and signed by 49 House Democrats. "A public health crisis is not an opportunity for the administration to promote its own political interests." 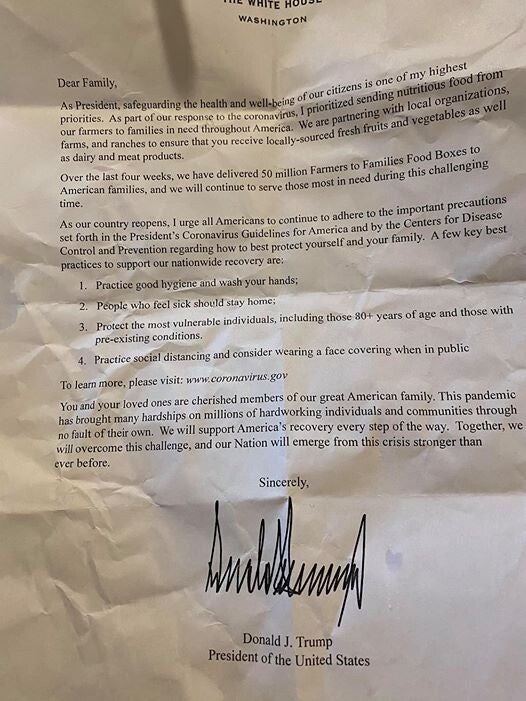 A Wisconsin food pantry volunteer posted an image of the letter that was included in the USDA's Farmers to Families Food Box. Submitted photo

In Wisconsin, food pantries and other distributors have had discussions in the last several weeks about whether nonprofits can legally distribute the letters, or whether they're obligated to notify recipients or take other action in response to the letters' inclusion in the boxes.

Donna Ambrose, executive director of The Neighbors' Place in Wausau, said she learned about the letters from a post online that said the letters had been included in boxes distributed in Waupaca County. When she checked into it, she was told by food distributor Feeding America that "the USDA conveyed to them that we could not remove the letters," she said.

As a nonprofit, The Neighbors’ Place does not back political candidates. And whether or not the letter is a violation of federal law, Ambrose said she's concerned about any of The Neighbors' Place's activities being perceived as partisan.

"As a nonprofit, I have to fiercely defend and protect our 501(c)(3) nonprofit status, which means we do not get into the political arena, and we do not want people to get the impression that we are advocating for a candidate, left, right or otherwise," Ambrose said.

Lisa Endl, communications director with Feeding America Eastern Wisconsin, said their organization facilitates distribution of the boxes, but doesn't control what is or isn't included in them.

The USDA did not respond to a request for comment. WPR could not determine how many letters had been distributed in Wisconsin.

In Wisconsin, the program has reached cities, rural areas and reservations. Its second round expired at the end of August; it's been renewed for several weeks in September, and could be extended again.

Ambrose said that without question, the program itself is helping Wisconsinites in need. Throughout the late spring and summer, volunteers in Wausau including those from The Neighbors' Place and the United Way gave out about 800 boxes each week to people who lined up in their cars to pick them up. Many of those picking up the boxes, Ambrose said, are middle-class people who didn't have a safety net to make it through layoffs or reductions in hours that millions of Americans have faced as a result of COVID-19.

"That is the thing the pandemic has laid bare," Ambrose said. "These are people who were doing OK (but) who were living check to check. And then the bottom fell out."