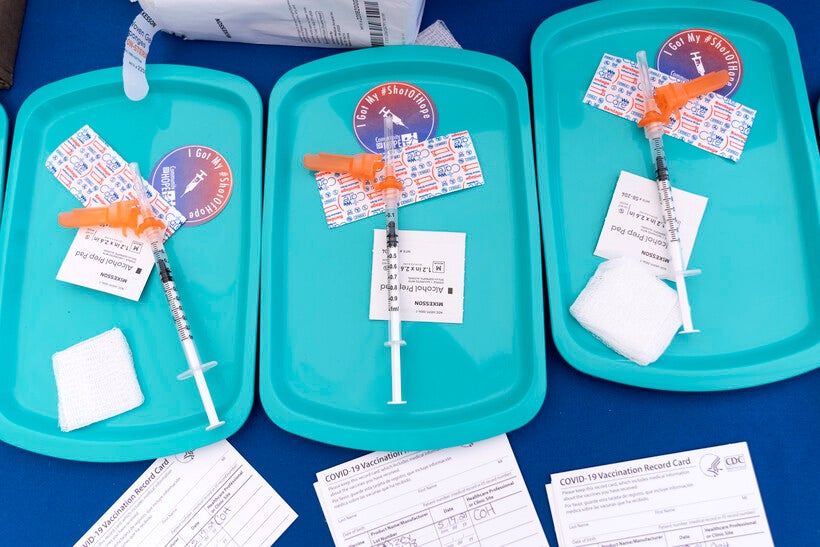 In this May 19, 2021 file photo, Pfizer COVID-19 vaccine doses are prepared for members of the community 12 years and up, at a clinic held by Community of Hope, outside the Washington School for Girls in southeast Washington. Jacquelyn Martin/AP Photo

New data from the Wisconsin Department of Health Services show people who have been vaccinated and boosted against COVID-19 were infected at a higher rate in April than those who were unvaccinated. But the state's epidemiologist stresses data is clear the effectiveness of vaccines in preventing against serious illness and death remain high.

DHS updated it's "Illness After Vaccination" webpage on Thursday to include data on people who have gotten booster shots after completing their vaccine series. It shows that in April the rate of confirmed and probable COVID-19 cases were highest among those who have completed the series and gotten a booster at 507 per 100,000. Those who were unvaccinated had an infection rate of 420.8 per 100,000. Those who completed the vaccine series but had not received a booster shot had an infection rate of 211.5 per 100,000.

During a media briefing, state epidemiologist Dr. Ryan Westergaard said the data comes from hospital and local health department reporting and doesn't represent a randomized, clinical research study and that there are potential biases built into the data.

Westergaard said the bottom line is that the effectiveness of current vaccines preventing infections from omicron variants of the coronavirus has gone down.

"But the effectiveness for preventing death and severe disease has remained high," Westergaard said.

"So, we're optimistic that the weather stays nice as people get vaccinated and recover and have some immune protection, that this wave won't be as severe as ones that we've seen in the past," Westergaard said.

But Westergaard said even with the slight decline and new antiviral drugs available at hospitals to treat severe COVID-19 illness, people need to be cautious during the Memorial Day weekend.

"A lesson that we've learned repeatedly during the two-plus years of the pandemic is that holiday weekends like Memorial Day, when people are gathering, it poses a risk for transmission," he said.