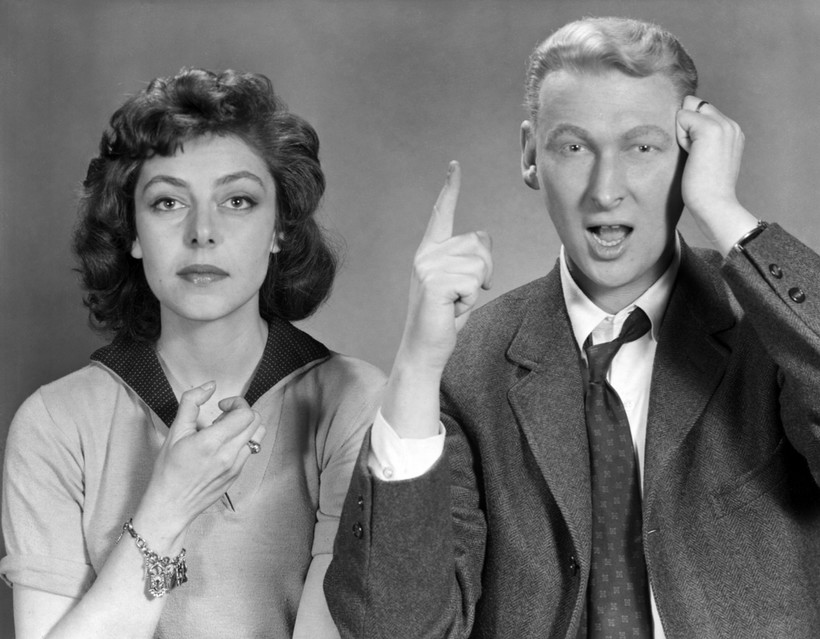 If You Think It Was Just A Matter of Winging It, Think Again
By Doug Gordon
Share:

Sam Wasson is the author of "Improv Nation: How We Made a Great American Art." As the subtitle of his book indicates, improvisation was invented here in the United States.

"People assume improv has been around since the beginning of time," Wasson told WPR's "BETA."  "Ad-libbing has been around. Certainly, people have had scripts and have deviated from the scripts. But the whole notion of, 'Can I get a suggestion from the audience?' That was invented by Viola Spolin in Chicago in the early part of the 20th century."

Spolin was a social worker who invented improvisational games in order to get children to interact with each other, especially children who didn't speak the same language. She worked with her son Paul Sills for the Second City Company in Chicago. Her book, "Improvisation for the Theater," is considered a classic work,

"Her son Paul takes his mother's games for children, and he says, 'Well, what if adults play these games on stage?'" Wasson explained. "And that could be a great way to convey the news of the day — just create instant theater for people and show people what their lives look like right now."

In 1955, Sills discovered two young actors at the University of Chicago and invited them to join America's first improvisational theater, the Compass Players.

"They were Mike Nichols and Elaine May," Wasson said. "So at that point, improv comedy becomes invented accidentally. This was not work that was intended to be funny. That's why I'm stressing the difference between improvisation and improv comedy. Improv comedy starts when Sills casts Mike and Elaine, whose natural pose is just to be funny."

Wasson said that in his opinion, Nichols and May are the greatest improv comedians.

"They were actors, great actors, great writers and great directors. They didn't know that yet, but they had all those muscles working. And that's what ... great improv comedians need to be to improvise. A lot of improv comedians — great ones today — they don't have all those muscles working. They may be great actors, but not necessarily great writers. They don't have three out of the three. Mike and Elaine had three out of the three. And I can even add as a fourth the fearlessness to take on taboo subjects."

One of the most important figures in the world of modern improvisational theater was Del Close. He was a member of the Compass Players with Nichols and May and then moved on to Second City and worked with the San Francisco improv group, The Committee. Wasson describes Close as "sort of the patron saint of the Upright Citizens Brigade."

"Del Close is the Zelig of improvisation, and he was a teacher and sort of a figure of risk. You know, he had many lessons. But I think Del's great lesson to the world is take the crazy choice, make the crazy choice, because it's only on the other side of crazy that you're going to find new worlds emotionally and artistically. And in a way, he learned that from Elaine. He was in love with Elaine his whole life. And who can blame him? But Elaine used to say, 'The only safe thing is to take a risk.'"

As Wasson writes in his book, Close was creatively restless. This restlessness led to his creation of a new form of improvisation called "The Harold."

"The Harold was sort of a group creation by folks in and around The Committee in the mid-60s in San Francisco," Wasson explained. "Del wanted to take improv out of the realm of short-form, which is to say sketch-size scenes. You know, the sort of length that you see on 'Saturday Night Live.' And he wanted to make it more theatrical: Can we take this thing and expand into an evening's entertainment? Can we find a form to help us improvise for an hour? And 'The Harold' was the name they gave this improvising structure."

Wasson says that "SCTV" is "the greatest comedy show of all time."

"I would say what puts it over the top for me is that there's actual filmmaking, that there's satire in the camera work, the lighting, the cutting.This is because 'SCTV' is about media satire and show business satire. That extended into the visual presentation of these sketches. So these sketches were in effect like little movies, and that the cultural level of reference on  'SCTV' is also so high. I mean, unbelievably high. Just think about one of the greatest moments in comedy, 'Johnny LaRue's Christmas Special.'"