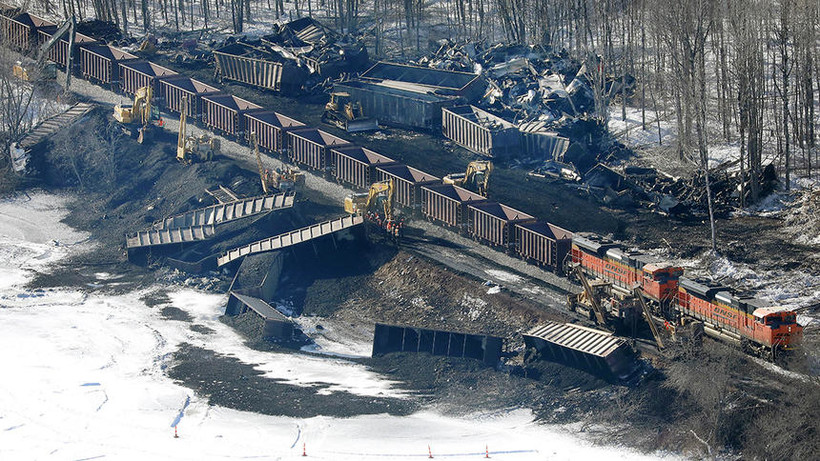 Tribal and emergency response agencies say they weren’t notified until hours after a BNSF train derailed this past weekend close to the Wisconsin-Minnesota border and near the St. Louis River that runs into Lake Superior.

The derailment occurred on the Fond du Lac reservation in Minnesota at around 11:30 a.m. on Saturday, about 30 minutes away from the Wisconsin border.

No one was injured, but Dupuis said the railroad should have contacted them.

Kevin Schroeder, fire chief for the Cloquet Area Fire District, said they didn't receive notification about the derailment until the state Fire Marshall's Office called for an update on Saturday.

"We didn’t even know it had occurred yet," he said.

Dupuis said they’re concerned that any coal in the river might impact spawning areas for sturgeon. Right now, it's unclear how much coal spilled into the St. Louis River. The Duluth News Tribune reported more than 4,000 tons of coal was dumped as a result of the derailment.

The Minnesota Pollution Control Agency isn't responding to the incident since it occurred on tribal land, according to Lucie Amundsen, the agency’s public information officer. However, she said, generally speaking, the release of coal on land has no impact.

"If a spill is on ice or in water, coal is generally not water soluble," she said.

Amundsen added there could be low amounts of sulfur in the coal depending on the type and chemistry, but she said there's generally not a big impact on the environment if a spill is cleaned up promptly.

Fond du Lac's tribal chairman said they would like to conduct an environmental assessment to make sure the cleanup is happening in the right way. However, the railroad has denied tribal staff access to the site, according to the band’s tribal attorney, Sean Copeland.

"They have said that we're able to access the water and do our own water sampling on the river so that’s some progress," he said.

Copeland noted the tribe has its own water quality standards that are federally recognized. He said they'd also like access to the site to exercise the tribe’s emergency operations plan. Meanwhile, Schroeder said they're still waiting on a safety plan from the railroad.

"Most incidents of this nature, or even an industrial environment, you’d have a safety plan set up that tells you how to get there, how to get out, your emergency phone numbers, evacuation plans, all of that," he said. "Seventy-two hours into it now, they still haven’t been able to provide us that."

Schroeder said there’s a high probability for injuries in the area because of its uneven terrain with work happening on ice and water.

"We've been told there’s little to no access up there other than by air boat and a one-lane road with no turnarounds," he said. "Our concern … this is a massive operation. They’ve got dozens of pieces of heavy equipment. We’ve been told over 30 people working up there."

A spokeswoman with BNSF Railway provided the following statement on Tuesday afternoon:

BNSF Railway made initial 911 notification of the derailment within 30 minutes of the incident occurring Saturday and then several subsequent communications occurred throughout the day. We’ve been working with the Fond du Lac leaders, providing regular briefings and safe access to the site since the derailment as our crews have been responding to the incident. As work continues there to remove the derailed cars and the spilled coal, we will continue these efforts. We’ll be assessing the quickest and safest way to remove coal in the river and will be working with the Fond du Lac officials on that plan as it is developed.

A spokeswoman with the Minnesota Department of Natural Resources said late Tuesday afternoon that the tribe had assumed the lead on a clean up plan to remove coal from the river and restore the shoreline.

The cause of the derailment is under investigation.