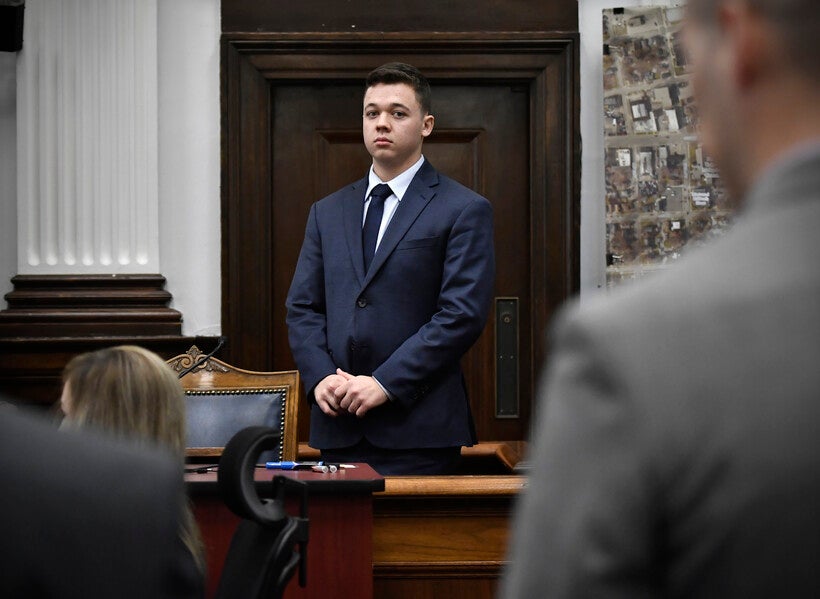 Kyle Rittenhouse waits for the jury to enter the room to continue testifying during his trial at the Kenosha County Courthouse in Kenosha, Wis., on Wednesday, Nov. 10, 2021. Rittenhouse is accused of killing two people and wounding a third during a protest over police brutality in Kenosha, last year. Sean Krajacic/The Kenosha News via AP

Kyle Rittenhouse's defense team asks for mistrial after he testifies

If motion is granted, the state could not refile charges against Rittenhouse
By Corrinne Hess, John K. Wilson and Andrea Anderson
Updated:
Wednesday, November 10, 2021, 1:40pm
Share:

During cross-examination, prosecutors questioned Rittenhouse about statements he made before the shootings. The judge previously ruled those statements were inadmissible.

Arguments over the motion, which lead to shouting from Kenosha County Judge Bruce Schroeder at Assistant District Attorney Thomas Binger, lasted about half an hour. The judge said he'd take the motion under advisement and rule on it later after the prosecution has a chance to respond. Rittenhouse then took the stand for further questioning by Binger. 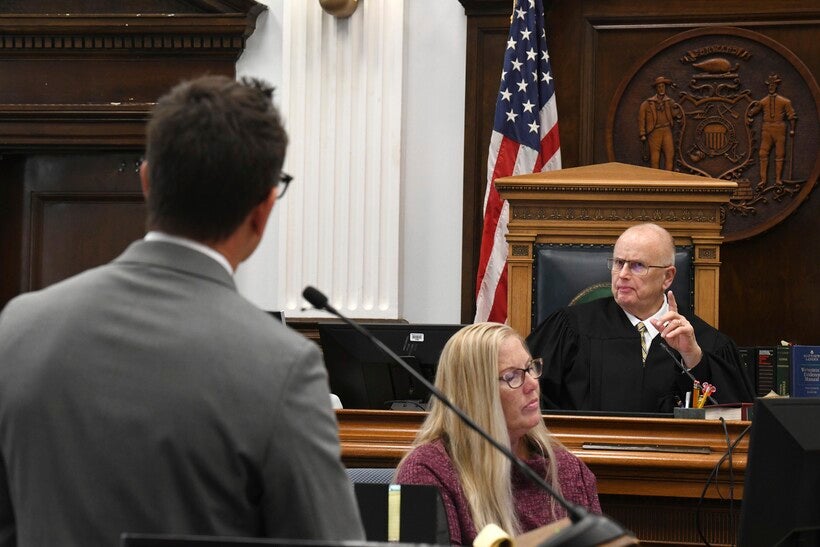 Before the motion, Rittenhouse, who shot and killed two people and wounded another during turbulent street protests in Kenosha in August 2020, took the stand in his trial for murder for several hours. He recounted his version of events before breaking down into tears Wednesday morning.

Wearing a navy suit and matching tie, Rittenhouse, 18, began his testimony answering questions from his defense attorney, Mark Richards, giving a step-by-step account of what he did Aug. 25, 2020, the day that ended with him fatally shooting Joseph Rosenbaum, 36, and Anthony Huber, 26, and wounding Gaige Grosskreutz.

Rittenhouse was 17 at the time of the shootings.

Rittenhouse's lawyers have argued that on that day, he was acting in self-defense when he killed Rosenbaum and Huber, and wounded Grosskreutz.

Rittenhouse testified that while he was in downtown Kenosha that night, offering first aid and protecting a car dealership armed with an AR-15-style rifle, he encountered Rosenbaum before their fatal run-in. He said Rosenbaum was holding a chain at one point and twice threatened to kill him.

At first calm and collected, Rittenhouse began describing the confrontation that led to him shooting Rosenbaum. Rittenhouse then became visibly emotional, crying and having trouble speaking.

After a brief recess, Rittenhouse resumed his testimony and told jurors he felt threatened by Rosenbaum and others around him who were shouting threats. He said Rosenbaum was reaching for the barrel of his gun when he shot him.

Rittenhouse said after the shooting he called Dominick Black, the friend who gave him the gun, and said he told Black he shot someone. While on the phone, Rittenhouse said he heard people shouting to capture him.

"I continue to run," Rittenhouse testified. "After hearing people say, 'Cranium him,' 'Get him,' 'Kill him,' people were screaming, and I was just trying to get to the police running down Sheridan Road." 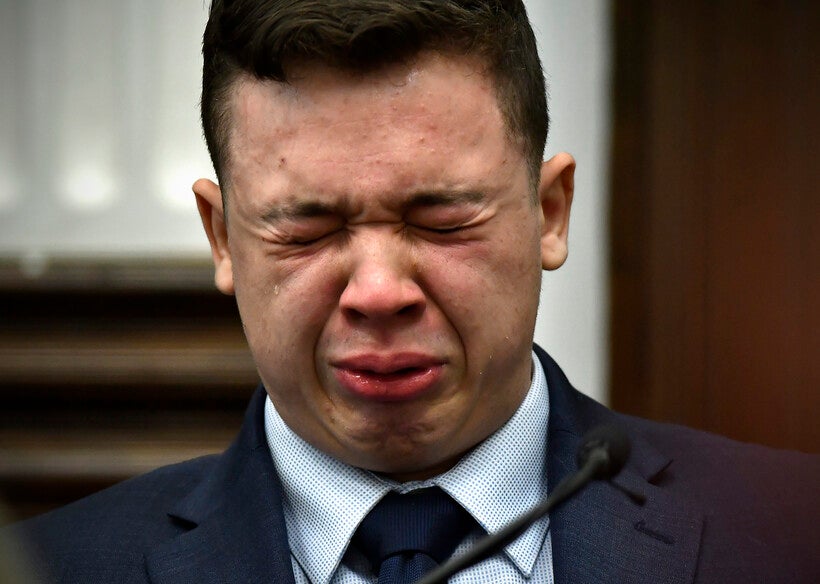 Kyle Rittenhouse breaks down on the stand as he testifies about his encounter with the late Joseph Rosenbaum during his trial at the Kenosha County Courthouse in Kenosha, Wis., on Wednesday, Nov. 10, 2021. Rittenhouse is accused of killing two people and wounding a third during a protest over police brutality in Kenosha, last year. Sean Krajacic/The Kenosha News via AP

Rittenhouse faces multiple felony charges of homicide and recklessly endangering the safety of others, along with one misdemeanor count of possession of a dangerous weapon by a minor. If convicted, Rittenhouse could face life in prison.

Rittenhouse arrived in Kenosha on the third day of protests following the police shooting in August 2020 of Jacob Blake, a Black man who was left paralyzed. The protests turned destructive, with cars and buildings torched.

Blake was shot by Kenosha police on Aug. 23, 2020. The shooting sparked days of protests and looting in Kenosha's downtown and uptown neighborhoods.

Rittenhouse traveled across the border from Illinois in response to a social-media call from a Kenosha-based militia group saying it hoped to protect businesses from protesters, Kenosha Police Detective Martin Howard testified Wednesday.

The medical examiner who performed autopsies on the two men shot and killed by Rittenhouse testified Tuesday, detailing their fatal injuries for jurors.

Doug Kelley, deputy chief medical examiner for Milwaukee County, testified that Huber died from a single gunshot wound to his chest that caused blood loss and extensive trauma to his heart and lungs. Meanwhile, Rosenbaum suffered multiple gunshot wounds, Kelley said, including to his groin, hand, thigh and back. Kelley testified the gunshot wound to Rosenbaum's back was the lethal injury, with the bullet hitting his lungs and liver. The wound to Rosenbaum's back could prove significant as Rittenhouse's defense team is expected to argue Rittenhouse was acting in self-defense. 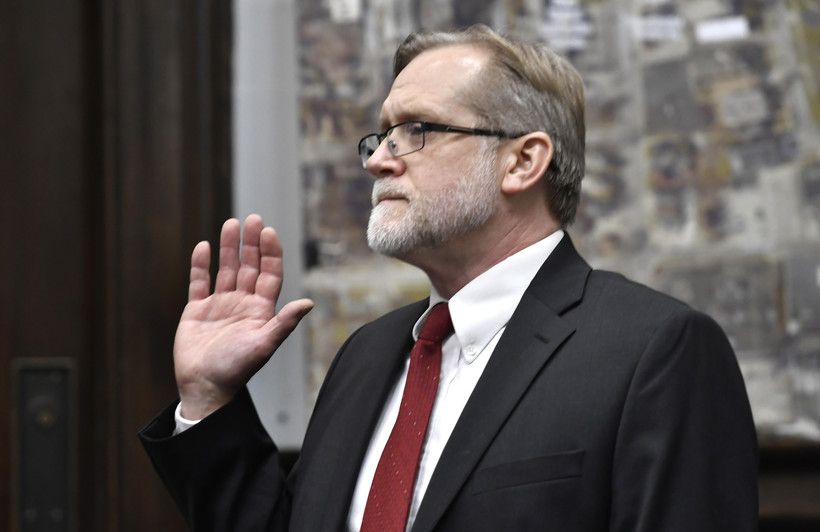 Monday's testimony was accompanied by graphic photos of the fatal injuries shown to the jury, including a gunshot wound to Rosenbaum's head and a bullet hole in his back. Rittenhouse turned away or looked down during the testimony, but at one point he appeared to look over at jurors as they viewed the autopsy photos. Jurors appeared to be taking extensive notes when the pathologist was testifying and explaining the fatal wounds.

The trial began last week, when 11 women and nine men were chosen to serve on the jury. Arguments began last Tuesday. A juror was dismissed Thursday after making a joke to a law enforcement official about the police shooting of Blake, another juror was dismissed for health reasons. There are now 18 people on the jury. The trial is expected to last about two weeks, according to the court.

​Editor's note: This story will be updated.