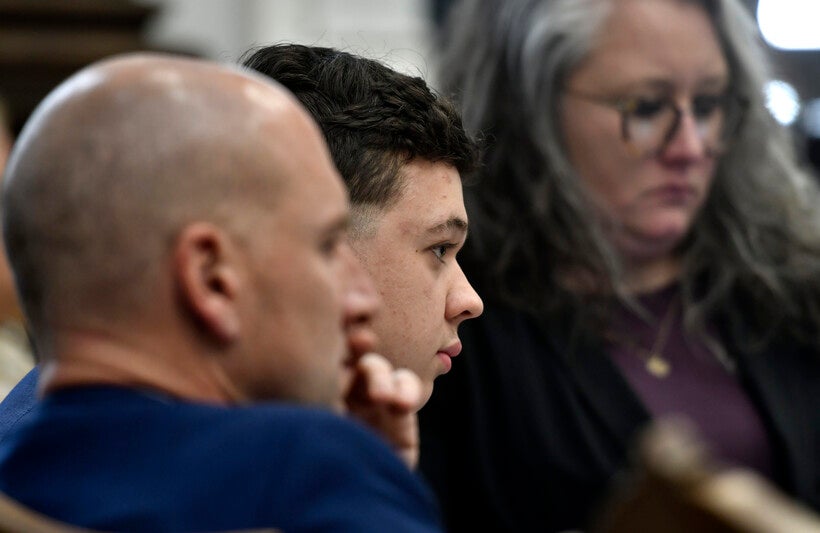 Kyle Rittenhouse, center, watches a video from "The Rundown Live" during his trial at the Kenosha County Courthouse in Kenosha, Wis., on Wednesday, Nov. 3 2021. Rittenhouse is accused of killing two people and wounding a third during a protest over police brutality in Kenosha, last year. Sean Krajacic/The Kenosha News via AP Photos

A juror in the Kyle Rittenhouse homicide trial was dismissed Thursday morning after making a joke to a law enforcement official about the police shooting of Jacob Blake, a Black man. 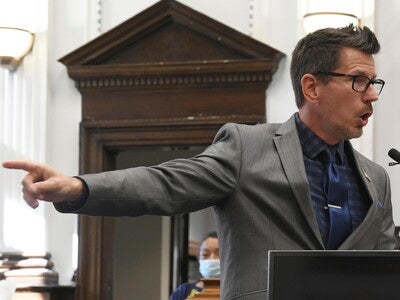 Assistant District Attorney Thomas Binger presents opening statements to the jury during the Kyle Rittenhouse trial at the Kenosha County Courthouse in Kenosha, Wis, on Monday, Nov. 2, 2021. Rittenhouse is accused of killing two people and wounding a third during a protest over police brutality in Kenosha, last year. Mark Hertzberg/AP Photo

According to Kenosha County Assistant District Attorney Thomas Binger, the juror, an older white man, said, "Why did the Kenosha police shoot Jacob Blake seven times; they ran out of bullets."

Binger asked the juror be dismissed.

Judge Bruce Schroeder spoke to the juror and dismissed him.

"I've talked quite a bit about public confidence in the result of the trial," Schroeder said after dismissing the juror. "It is clear the appearance of bias is present, and it would seriously undermine the results of the case."

On his way out of court the man told Schroeder the joke "had nothing to do with the case."

There are now 19 people on the jury.

Blake was shot by Kenosha police on Aug. 23, 2020, and was left partially paralyzed. The shooting sparked days of protests and looting in Kenosha's downtown and uptown neighborhoods.

Rittenhouse, 18, arrived in Kenosha on the third day of protests armed with an AR-15-style rifle and shot three protesters, killing two of them. He faces multiple felony charges of homicide and recklessly endangering the safety of others, along with one misdemeanor count of possession of a dangerous weapon by a minor. He was 17 at the time of the shootings. If convicted, Rittenhouse could face life in prison.

Rittenhouse's lawyers argue that on Aug. 25, 2020, he was acting in self-defense when he killed Joseph Rosenbaum, 36, and Anthony Huber, 26, and wounded Gaige Grosskreutz. Rittenhouse traveled across the border from Illinois in response to a social-media call from a Kenosha-based militia group saying it hoped to protect businesses from protesters, Kenosha Police Detective Martin Howard testified Wednesday.

Grosskreutz, who lost a portion of his right bicep after being shot by Rittenhouse, was expected to testify this week, but his attorney Kimberley Motley said she hopes Grosskreutz has an opportunity to tell the jury what happened the night of the shooting, but it's up to the state, or defense, to call him as a witness.

"I do think his version is very important in terms of what happened, frankly he's the only surviving victim," Motley said, adding that she's not sure the prosecution will be able to wrap up their case this week. "I just don't know what their strategy is, so I just don't know."

Motley didn't want to comment on the case, but said there is a lot of information being shared that the public was unaware of, which is to be expected in a trial like this one.

She said Grosskreutz wants to do whatever is best for this case. And that he's "just trying to live his life the best he can," after being shot by Rittenhouse, adding, "if he is needed, he'll be here."

Howard, the lead investigator in the case, walked the jury through several recordings from the night of Aug. 25. In graphic detail, one video showed Rosenbaum being shot and dying on the street as fellow protesters leaned over his body, simultaneously screaming and videotaping the events with their cell phones.

On Wednesday, Richie McGinnniss, a videographer with a right-wing news website founded by Tucker Carlson, took the stand for the prosecution. McGinnniss witnessed Rosenbaum's shooting and helped carry him to a nearby hospital.

Binger said he anticipates wrapping up his side of the case Tuesday.

The trial began Monday, when 11 women and nine men were chosen to serve on the jury. Arguments began Tuesday. The trial is expected to last about two weeks, according to the court.