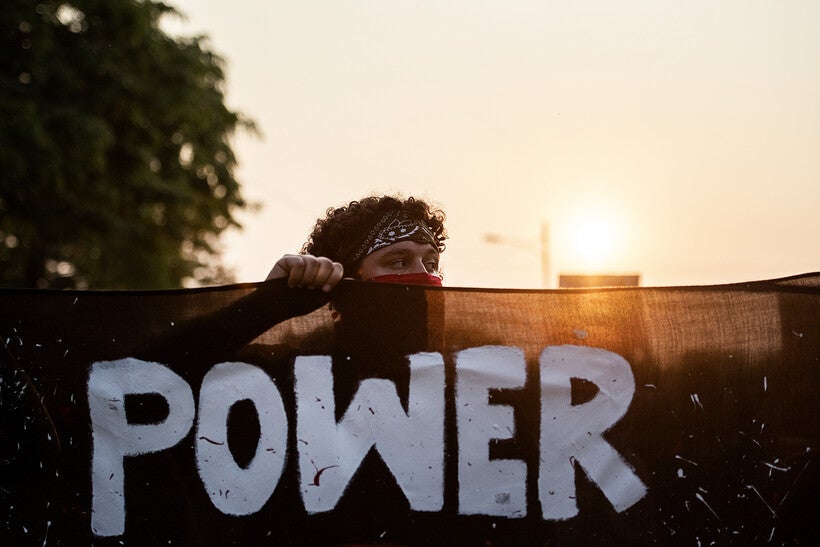 A protester holds a banner at the front of the crowd of marchers Monday, Aug. 24, 2020, in Kenosha. Angela Major/WPR

A Year After The Shooting Of Jacob Blake, Kenosha Is Healing, But Deep Wounds Still Exist

One year ago, two men encountered each other in Kenosha and their lives — and the city — changed forever.

Rusten Sheskey, a white cop who had seven years of experience with the Kenosha Police Department, fired seven shots at close range in the back of Jacob Blake, a Black man.

Blake was walking away from the officer and toward a parked vehicle where two of his young children were sitting.

The shooting left him paralyzed.

In the immediate wake of the Aug. 23, 2020 shooting, Kenosha erupted in violence. The city’s neighborhoods were looted. And Kyle Rittenhouse, a teen from Illinois, allegedly killed two men and injured a third during a Kenosha Black Lives Matter rally. 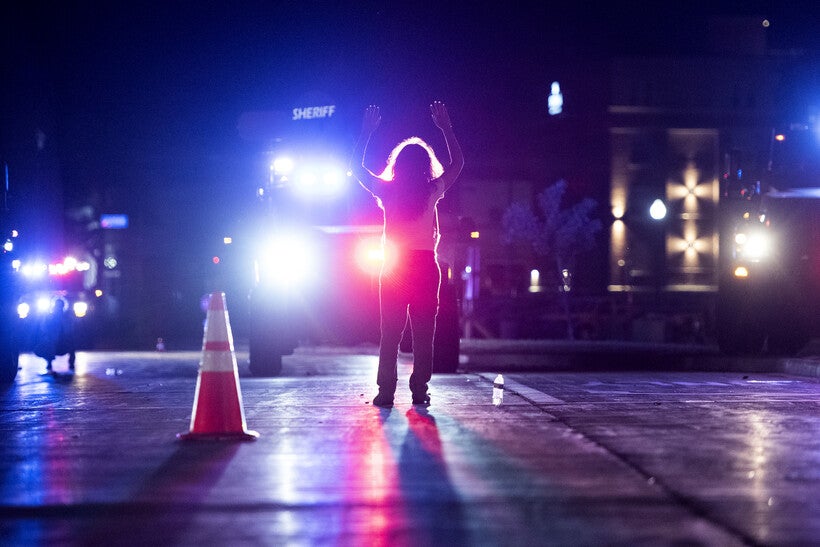 Sheskey was found to have acted within the law and department policy. He returned to work in April.

Jacob Blake’s uncle, Justin Blake, calls his nephew a hero who has tried to stay positive over the last year.

"It’s unreal. He goes through pain every day, he can’t even get out of the bed some days," Justin said. "It’s miserable. Even on the best days."

Jacob is living with family in the Chicago area and requires around-the-clock nursing care, said Justin.

Justin said caring for Jacob is extremely expensive — Jacob does not have health insurance. But donations from friends, family and an ongoing GoFundMe has helped the family pay for his care. 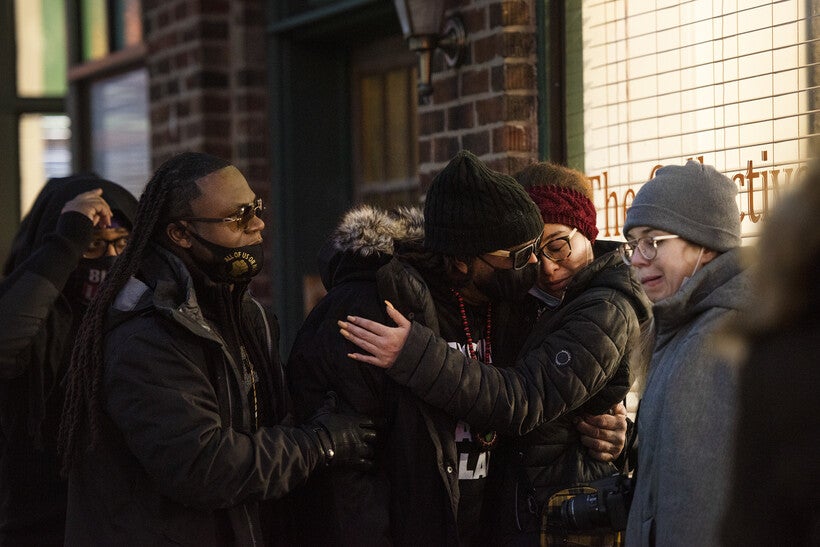 Justin Blake, Jacob Blake's uncle, hugs someone on a sidewalk after speaking to members of the press Tuesday, Jan. 5, 2021, in Kenosha, Wis. Angela Major/WPR

Justin recently visited Jacob to celebrate his 30 birthday. He said his nephew was in good spirits and played cards with his siblings. But the activities caused him to spend the next two days in bed.

"Any way you chop it up, it’s not a good life," Justin Blake said.

To commemorate the one-year anniversary of Jacob’s shooting, his family held an event Saturday in Kenosha’s Civic Park, where much of the year's previous rallies have taken place. Jacob did not attend.

"Jacob will never set a foot ever in Wisconsin ever again in his life," Justin told WPR before the event.

Changes In The City of Kenosha

Much of downtown Kenosha has been repaired and renovated since the civil unrest caused an estimated $50 million in damage to the city.

In the months following the unrest, city officials announced their "Downtown Vision."

The $400 million plan is an eight-block redevelopment in Kenosha’s Uptown neighborhood that includes two 11-story apartments that will house affordable units. Entertainment venues and a hotel are also planned.

Kenosha Mayor John Antaramian did not respond to request for comment.

Police Chief Eric Larsen, who took over as chief in May, said the police department has been holding listening sessions with the city’s disadvantaged communities and has started a violence interrupter program, similar to what the city of Milwaukee has. Interrupters are members of the community, trained by police, who intervene to prevent disputes from turning deadly. 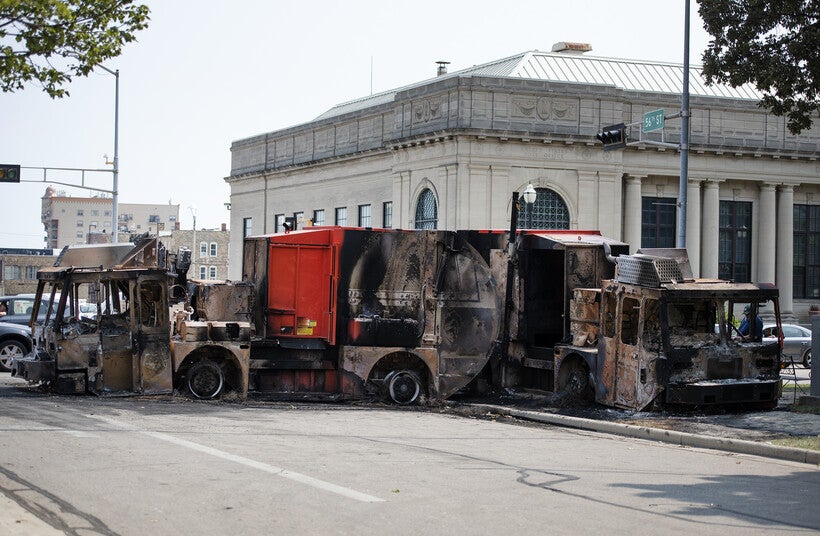 Larsen has been with the department for 27 years and was deputy chief from 2016 until he was appointed police chief. He said before the shooting, he thought the department was communicating well with the community, but he learned they weren’t really listening.

"Historically, we had done listening sessions and town halls, but you didn’t necessarily get the people there that we needed to listen to," Larsen said. Now, the police are holding the forums in the neighborhoods.

One of the most difficult things for the department and the community has been Sheskey's return to work in April, Larsen said. Sheskey is working in the investigation’s bureau. He is not out on patrol.

"Where he ends up for sure, permanently, is unsure. I’m still thinking on that," Larsen said. "Clearly, there are still members of the community that feel he should be fired and charged. Ultimately, the goal would be to put him on the road, but the future is not certain at this point, which makes it difficult for him."

"The African Americans are still marginalized, they’re still in pain are they’re still grieving," said Justin. "It’s PTSD. When police cars pull up, everyone is trying to get the hell out of the way."

Rittenhouse Case Has Been Bumpy

Rittenhouse won’t face a jury until at least November, but there has been ongoing activity on his case throughout the year.

Most recently, prosecutors filed a motion last week to submit a 29-second video that shows him talking about shooting people about two weeks before fatally shooting two protesters and wounding a third, according to the Kenosha News.

Prosecutors say the video shows Rittenhouse watching some men exiting a CVS store and then commenting that he wishes he had his rifle so he could shoot them.

Prosecutors are also asking for a list of everyone who has donated to Rittenhouse’s defense, so supporters do not become potential jurors.

Meanwhile, the parents of Anthony Huber, one of the men allegedly killed by Rittenhouse, filed a federal lawsuit against Kenosha authorities. The suit alleges they incited bloodshed by allowing Rittenhouse and other armed civilians to "wreak havoc and inflict injury" during last summer's unrest.

Rittenhouse's trial is scheduled to begin Nov. 1. He faces a host of charges, including first-degree reckless homicide. A motion hearing is set for Sept. 17. Rittenhouse maintains he fired in self-defense.

Larsen said the Kenosha Police Department will be on alert during the trial, but he doesn’t believe the same civil unrest will occur this year. Larsen said the police will work with community organizers if rallies are planned.

"In a lot of ways, (protests are) the public having a voice, and it’s something that people listen to," Larsen said. 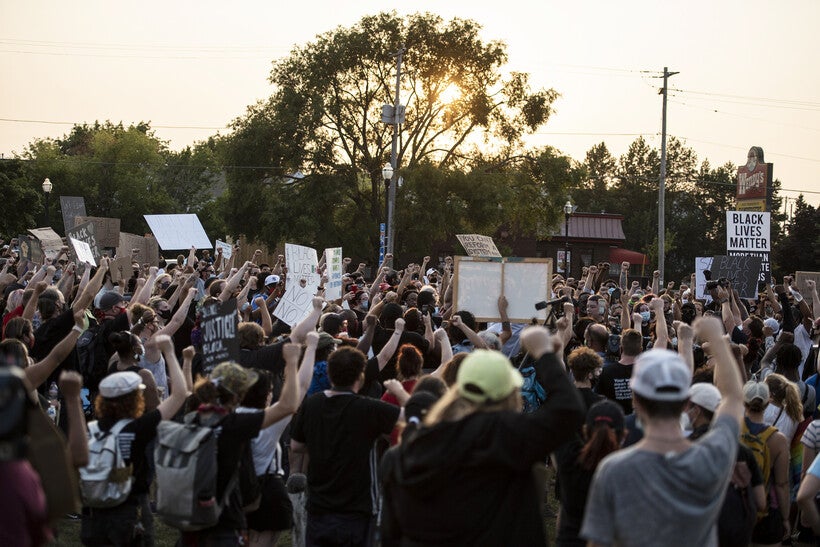 Protesters raise their fists in the air as they proceed form Civic Center Park on Monday, Aug. 24, 2020, in Kenosha. Angela Major/WPR