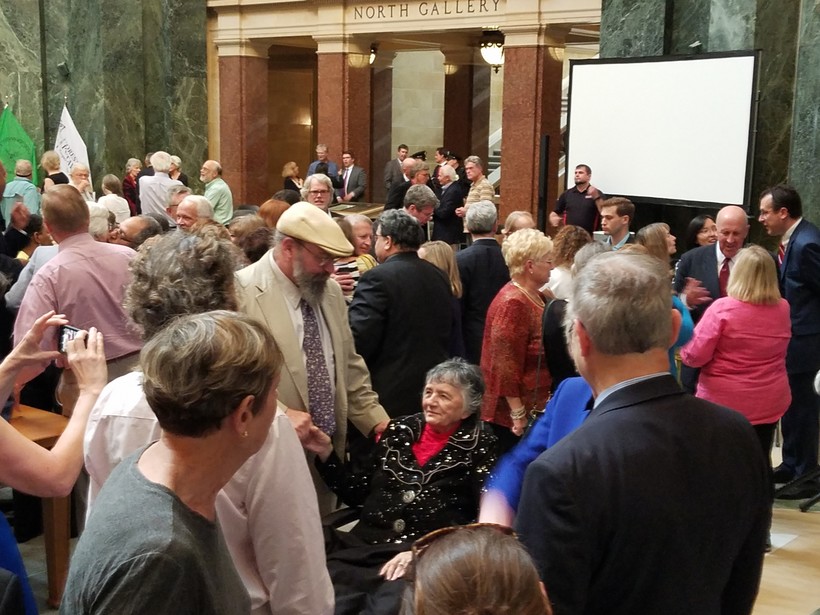 People lined up at in the state capitol rotunda Tuesday to shake hands and pose for pictures with Justice Shirley Abrahamson, who is retiring next month. Abrahamson was honored by several speakers, including U.S. Supreme Court Justice Ruth Bader Ginsburg. Shawn Johnson / WPR

Abrahamson Will Retire Next Month After 43 Years On The Court
By Shawn Johnson
Share:

Friends and colleagues of longtime Wisconsin Supreme Court Justice Shirley Abrahamson described her Tuesday as one of the sharpest minds they'd ever known, saying her intelligence, tenacity and empathy helped pave the way for generations of women who followed in her footsteps.

Abrahamson, 85, will retire from the court next month, 43 years after she was sworn in as the first woman ever to serve on Wisconsin's Supreme Court. Abrahamson announced last year that she would not run for a fifth term, and months later, announced that she had cancer.

Those who spoke on her behalf during a ceremony inside the Wisconsin State Capitol rotunda included U.S. Supreme Court Justice Ruth Badger Ginsburg, who honored Abrahamson in a recorded video message.

"Among jurists I have encountered in the United States and abroad, Shirley Abrahamson is the very best," said Ginsburg. "The most courageous and sage, the least self-regarding."

Ginsburg said Abrahamson had always been mindful of the people the law exists to serve.

"She has inspired legions to follow in her way, to strive constantly to make the legal system genuinely equal and accessible to all who dwell in our fair land," Ginsburg said.

Abrahamson's career was described as a long line of firsts leading up to her appointment on the Wisconsin Supreme Court by Democratic Gov. Patrick Lucey in 1976. She later won four statewide elections to the court and served for nearly 20 years as its chief justice.

Abrahamson was the only woman in her class at Indiana Law School, where she graduated at the top of her class in 1956.

She was hired by former Democratic Gov. Jim Doyle's father to work at his law firm, where Abrahamson became a partner.

Doyle remembered arguing cases before Abrahamson when she was on the Supreme Court and he was the Dane County district attorney.

"She didn't abide lazy thinking, she didn't abide sophistry" Doyle said. "You better get to the point, you better have thought through what you had to say, and you weren't going to waste her time."

Doyle said that as governor, he remembered coming back to the Wisconsin State Capitol building after long days of touring the state. The building would be dark, but the lights in Abrahamson's office were on.

"And you knew that Shirley Abrahamson, and one or two beleaguered law clerks were up there working for us," Doyle said. "Imagine what an honor it is to have the things that you are most criticized for being that you are too smart and you work too hard."

Former Supreme Court Justice Janine Geske served with Abrahamson from 1993 until 1998. She remembered meeting Abrahamson in 1976.

"I remember because I was a young, legal aid lawyer, nine months pregnant, and looking for role models at the time," Geske said. "Since then, she has inspired me and thousands of young girls and women to follow in a path to becoming lawyers, and in many cases, judges."

U.S. Appeals Court Judge Diane Sykes, who was appointed to the 7th Circuit Court of Appeals by Republican President George W. Bush, served on the Wisconsin Supreme Court with Abrahamson from 1999 until 2004.

Sykes, who was among those considered for a U.S. Supreme Court nomination by President Donald Trump, was part of the state Supreme Court's conservative block. Abrahamson was aligned with the liberals.

"I'm grateful as well for all the times she challenged me on my opinions, though that's easier to say now than back then," Sykes said. "Especially when I was on the receiving end of a long memo from her, often late at night, meticulously dissecting something I had just written."

"We agreed on many cases, disagreed on some, and the strength of her work always made mine better," Sykes said.

Abrahamson spoke for about five minutes, rising from her wheelchair as the crowd in the rotunda stood and cheered.

Abrahamson said the need for an independent judiciary in Wisconsin, and the nation, had never been greater.

"From the day I took the oath of office, I believed in the concept of an independent judiciary. I still believe in it. I hope you do as well," Abrahamson said.

Abrahamson said she'd been involved in about 2,000 decisions, and four statewide elections.

"I have always been opposed in an election — that's a record," Abrahamson said. "But the other record is I won and I never received less than 55 percent of the vote."

Abrahamson will be replaced on the court by conservative Justice-elect Brian Hagedorn, who defeated Judge Lisa Neubauer in April. Hagedorn will begin his term on Aug. 1.

Abrahamson's term will end on July 31, but she said her work was not yet done.

"I'm not going to tell you about my last opinion because I'm still working on it," Abrahamson said. "And I don't know how it ends."