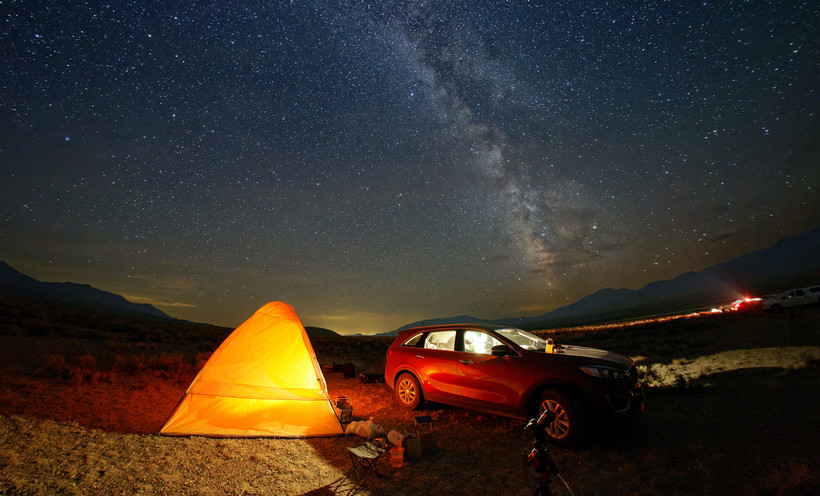 A vast expanse that hides behind the ambient glow of city lights waits each night to be explored.

And while a small telescope or binoculars can expose Jupiter's moons and Saturn's rings, a group of astronomers at the University of Wisconsin-Madison is encouraging amateur sky watchers to revel in its dotted canvas from one of Wisconsin's state parks.

Universe in the Park is an outreach program that invites members of the public to join astronomers and view the sky from 8- and 10-inch telescopes in state parks. Started in 1995, the program has been funded at different times by NASA, the National Science Foundation and philanthropists Jere and Anne Fluno. Graduate students take turns heading to different parks across the state, setting up the campsites and answering questions from the public before viewing the night sky.

"What we try to do is just to get out to as many parks as we can so as many people as possible can take advantage of the program," said Eric Wilcots, a professor of astronomy at UW-Madison who conducts research on the evolution of galaxies.

One of the locations where the program takes place is at Ellison Bay's Newport State Park, which is one of few parks in the U.S. that is Dark Sky Designated, which means it meets certain thresholds for less ambient light in the atmosphere.

"It really started out with (the idea that) the best way to experience the night sky is to get away from the city lights and the state parks around Wisconsin are a great place to do that," Wilcots said.

This weekend, the program will take place in Governor Dodge State Park and Kohler-Andrae State Park just ahead of an aurora borealis phenomenon set to strike across Canada and the northern U.S. on Sunday and into Monday. The aurora borealis viewed from Minnesota. Kat B. (CC BY-NC-ND 2.0)

Although the Universe in the Park program spans the summer and fall, this weekend's programs set the stage for a massive event that could potentially be viewable to sky watchers in the southern part of Wisconsin, which the Northern Lights don't often reach.

Astronomy graduate student Julie Davis said magnetic fields are created by a moving charge. The sun is full of charged particles and because it rotates, it generates a magnetic field.

The earth does the same thing.

On the sun, our solar system's star, are sunspots — areas where magnetic field lines are coiled up, Davis said. As the sun rotates, these get stressed and snap, sending particles toward Earth.

These particles might get trapped in our magnetic field lines, Davis said, which direct those particles to the north and south poles where they react with the oxygen and nitrogen molecules.

"They light up," she said. "The high energy gets dissipated in the upper region of the atmosphere and this causes that glow that we see as the aurora."

Davis explained that the sun has an 11-year solar cycle and occasionally becomes more active, producing brighter auroras that spread out over larger distances. That means sky watchers farther south are more likely to experience auroras than normal.

While it's not always clear when these events happen, astronomers can predict when to see the aurora borealis. That's because it takes the particles a while to get from the sun to the earth. But the aurora this weekend isn't the only opportunity to view the sky's mysteries.

Davis said amateur stargazers can use applications on their phones to find constellations in the night sky. Some free popular stargazing apps include SkyView, Star Chart, SkyWiki and SkEye.

"With practice, it gets a little easier,' she said.

While some favorites to look for, such as Orion, are only viewable in winter in Wisconsin, Davis said some constellations that are easier to spot are Cygnus, which means swan in Latin and looks like a cross; Lyra; and Aquila, which mean Eagle in Latin.

The asterism that Davis uses to find these summer constellations is known as the summer triangle, which is made up of three bright stars: Deneb in Cygnus; Vega in Lyra; and Altair in Aquila.

If you're simply looking for the North Star, first find the Big Dipper, which looks like a ladle, and focus on the two stars on the edge of the cup. Follow the direction of those stars, and that will lead you to the North Star, Wilcots explained. If you've found the North Star, you've also found the Little Dipper, because that star serves as the end of the handle of this asterism.

Some planets will begin to emerge earlier in the evening as well, Wilcots said, such as Venus and Jupiter.

The darker the sky, the more stars are viewable, Wilcots said, adding that dark places such as Rock Island or Newport lend an "impressive" view of the Milky Way Galaxy.