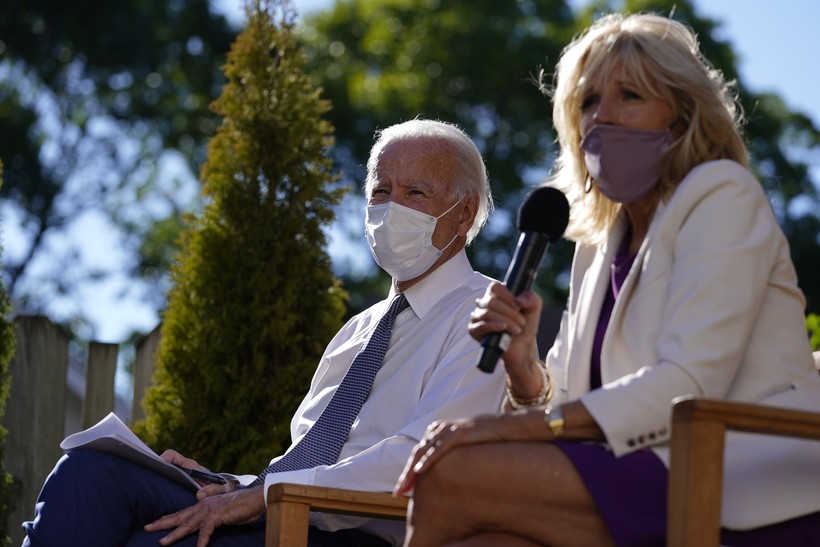 The event, which discussed the challenges for working parents of keeping up with kids' instruction from home, was held online.

Biden, the wife of Democratic presidential nominee Joe Biden, has been a teacher for 36 years, and said she plans to continue teaching writing at a community college if she becomes first lady. She appeared at the virtual event with Wisconsin state Treasurer Sarah Godlewski and two women from Green Bay who said they are struggling to maintain their careers and their families' well-being while helping with their kids' virtual instruction.

"Parents, educators, students — no one wants to get kids back to school more than we do," Biden said. "But we know we have to do it safely."

The COVID-19 pandemic forced school closures in March, and throughout much of the summer, whether schools would reopen for in-person classes in the fall was a hotly contested question. President Donald Trump, a Republican, repeatedly urged schools to bring students back to school buildings.

But in Wisconsin, many schools, especially the state's largest districts, chose to begin school virtually. They cited statewide increases in COVID-19 cases through much of the summer. But the decision has created challenges for parents like Amanda Chu, a mother of three and an entrepreneur in Green Bay who participated in the Biden campaign event.

"It's taken a lot of really flexible thinking and ... constant communication (with her husband), even when we're super exhausted," said Chu, who is also a member of the Brown County Board. "We were up past midnight last night looking at the schedule, trying to figure out who's taking kids for an hour here, an hour there."

Another participant in the call, Erin Beres, said her husband was laid off early in the pandemic. More recently, as her son, who is autistic, returned to virtual schooling, she had to quit her job at a bank in order to supervise him with his virtual lessons.

Beres just went back to work within the last year and a half, she said, after staying home when her son was younger.

"So then to have to (quit), it felt like a piece of me was gone again as well," she said.

The discussion was not heavy on policy or traditional campaign speech-making. Biden asked Chu how she was handling the anxiety she said she'd been experiencing. And, she assured Beres that she'd be able to go back to work one day.

She also said the effects of the pandemic would likely be with us for years to come.

"Both students and educators are going to need more mental health support to deal with the trauma of this pandemic," Biden said.

A recent report from the Wisconsin Institute for Public Policy and Service Research Partners found that central Wisconsin students in August were feeling anxiety and stress around the upcoming start of the school year — both in districts that were offering in-person school and those that were starting the year virtually.

Most Americans don't approve of Trump's handling of the U.S. response to COVID-19, according to public opinion polls. But questions about whether schools should be open are much more closely divided.