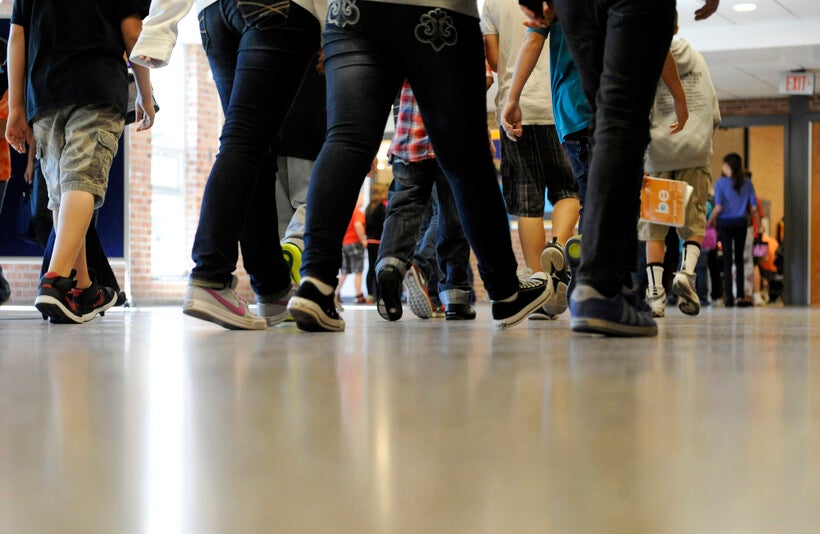 Focus Groups In Central Wisconsin Offer A Window Into Worries Of Middle- And High-School Students
By Rob Mentzer
Share:

Students are anxious and worried about what school will look like this fall, whether virtual schooling will work and how they'll maintain their own mental health without sports and other extracurricular activities.

Those were among the findings of a new report from the Wisconsin Institute for Public Policy and Service Research Partners, which conducted focus groups of students across 13 middle and high schools in Marathon County. The report provides a window into the thoughts and feelings of the group of Wisconsinites most affected and least heard from in public debates about reopening schools: students.

What it finds, said researcher Sharon Belton, is that students have a "sophisticated understanding" of the risks and issues around COVID-19 infections. But their rising anxieties and concerns about the school year tend to be focused on other factors — on the shortcomings of virtual schooling and how their academic preparedness could suffer, on the loss of social connections and meaningful extracurricular activities and on where they'll find support for academic or mental-health concerns.

"One of the takeaways from this project is a real need to understand the baseline level of anxiety, stress and uncertainty that is kicking off the start of the school year," Belton said in an online presentation of the report. "It's very high."

Among the concerns expressed by students:

In Wisconsin, most public schools will start classes in early September. Most of the state's largest school districts will begin with virtual classes due to COVID-19 concerns.

In central Wisconsin, the students in the focus groups came from districts that are themselves reopening in different ways. Among the nine school districts represented were Wausau, which is beginning its school year with virtual instruction; D.C. Everest, where instruction will include both in-person and virtual classes; and rural districts including Athens and Edgar that will offer five-days-per-week in-person instruction.

Most students in the focus groups said masks should be mandatory in school. The statewide mask mandate for indoor public spaces ordered by Gov. Tony Evers expires on Sept. 28. And the groups said the support of counselors and other mental health professionals is essential.

"There's a need for more access to counselors, a need for school psychologists to play a more visible role in the student population in general, not just to students who have an identified need for counseling support," Belton said.

The focus groups are not the first research to find significant mental health effects of the pandemic in children. In May, a researcher at the University of Wisconsin School of Medicine and Public Health in a study for the Wisconsin Interscholastic Athletic Association found that reports of moderate to severe depression among Wisconsin high school athletes had increased by 20 percent in the pandemic, and that as many as 66,000 young athletes in the state could be at risk of depression. Scientific studies have tracked risks for vulnerable youth and the broader youth population have found increased risks. Other studies have shown similar findings in adults.

Those concerns have informed some discussions about whether it's safe to reopen in-person schooling in Wisconsin. In Kenosha, the school board on Aug. 18 voted to overturn an earlier decision to start school virtually, opting for in-person classes instead after dozens of parents and students spoke at the board meeting.

One parent, Julie Balch, spoke about the toll the spring and summer shutdown of school and extracurricular activities took on one of her children. She said her daughter suffered worsening depression and anxiety following school closures in March.

"My child has suffered because all of her normal outlets were taken away, school and sports," Balch said. "My child is one of many for whom this has been a huge mental health issue."

Balanced against these concerns is the research and experience of other states showing that in-person school can increase the community spread of COVID-19. In general, young children do not get as sick with COVID-19 as adults or at-risk populations do, though children can and do contract the virus and scientists don’t know the long-term implications of having been infected by a novel virus. But new research suggests that children can play a significant role in spreading the disease to others, including those populations at risk of serious illness or death.

Even among those in the student focus groups who said virtual schooling was worse than in-person school, there were some bright spots. Virtual schooling allows students to take breaks as needed, and most significantly, schooling from home allows them to get more sleep. Numerous studies have shown that adolescents don't get enough sleep, and that early starts to high school in particular are damaging to student learning.

Belton said the purpose of the central Wisconsin study was not to make policy recommendations to school boards or other leaders, but rather to help emphasize the importance to decision-makers of listening to youth voices and communicating with them when it comes to school plans.

"Many (students) don't feel like they're getting information about what their schools' plans are and what the details are," Belton said. "They're feeling like they don't have a say or input into the process of returning to school."