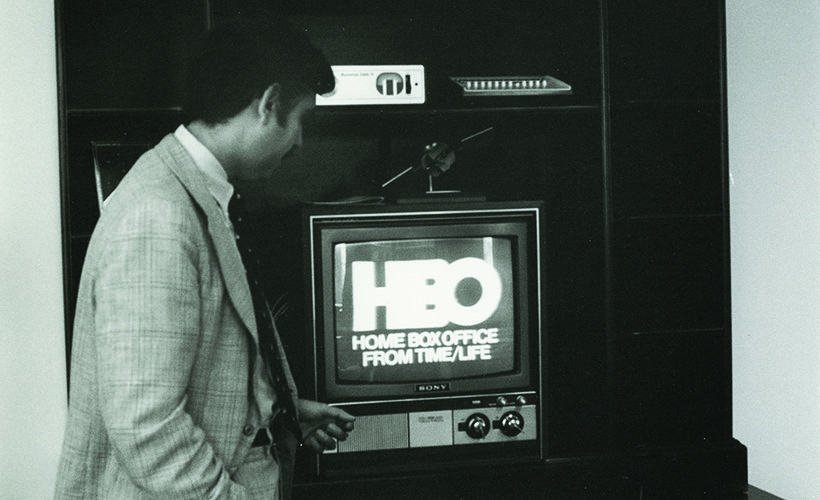 Long before the familiar "duh-duh" refrain of Netflix launching, TV viewers experienced a similar pavlovian response to another sound. The famous static ascension of the HBO logo that fired up right before their favorite show began.

Whether it was "The Sopranos," "Sex and the City" or "Game of Thrones," that video logo was the fanfare of excellence that promised prestige television was on tap.

Journalist James Andrew Miller — famed for his tell all and provocative oral histories, including the game changing expose on ESPN, "Those Guys Have All the Fun" and the history of "Saturday Night Live" with "Live from New York" — set out to document the premium pay channel's 50-year history with his comprehensive, "Tinder Box: HBO's Ruthless Pursuit of New Frontiers."

Although, calling this book comprehensive is like calling an ocean vast. At nearly 1,000 pages, this doorstop of a tome leaves no stone, story or show unturned or uncovered. Miller tells WPR's "BETA" that long before the network launched the concept of prestige television, they were already redefining our relationship to television.

"We have to transport ourselves back to 1972. The idea that we could sit in our living room and watch a movie without commercials and without network censors blurting out language, nudity and whatever else came along, I think was startling and revolutionary at the time," he explained.

What began as an experiment to capitalize on the new frontiers promised by cable television, the early HBO founders led by Chuck Dolan knew they would need to secure must-see programming if they were going to charge a premium each month. As an avid sports fan, Dolan saw the power of being the home for a specific sport. In HBO's case, this was boxing.

"They took boxing, which had been somewhat moribund and was relegated to Saturday afternoons on the networks, and brought it to primetime. Just in time for like Mike Tyson and Thomas Hearns and Marvin Hagler and all these unbelievable boxers. And so, I think boxing was that was a big engine for HBO's growth," Miller said.

With an established foundation of uncut films and boxing's biggest stars, HBO continued to innovate with groundbreaking documentaries that tackled some of the biggest issues of the day like AIDs, Scientology and the popular docu-series, "The Jinx." Surprisingly, however, Sheila Nevins, who helmed HBO's documentary team, found transcendent success with some more salacious series.

"She was responsible for spearheading the late-night very, very sexual in nature documentary series that HBO did, and those things were incredibly popular," says Miller. "You talk to a lot of people, that's one of the first things that they remember about HBO was being able to turn on shows like 'Real Sex', 'Cathouse', 'Taxicab Confessions' and see things that they hadn't seen before."

HBO's censor-less format also became a trailblazing haven to another arena of content: comedy. For years, comedians only had late-night programs to perform a shortened, edited version of their set. Network censors could neuter anything that might upset sponsors. With no sponsors to worry about, HBO created the now commonplace concept of the comedy special.

With several popular (and profitable) content streams in place, HBO began dipping its toe into original programming. They developed an early single-camera sitcom, "Dream On," with struggling theater writers David Crane and Marta Kauffman. After a contract snafu, Crane and Kauffman would go on to create the comedy sitcom giant, "Friends" for NBC.

But it was in the late '90s when HBO hit on a pair of shows that really paved the way for what was to come next.

"I think 'The Larry Sanders Show' and 'Oz' were two big shows in HBO's early development because both of them registered in meaningful ways and in different ways," Miller said.

"Oz" was a particular harbinger of what was to come because it fully utilized HBO's lack of censorship boundaries to create a dark and realistic look at a prison drama.

"'Oz' was fearless. It was incredibly violent, incredibly vulgar," Miller said. "How many shows are set in a prison? Well, you don't really want to do that because it's such a dark, dangerous world. And HBO was instantly saying, 'We're going to go to places that the networks don't.'"

What came next altered television history.

In the early 2000s, HBO — led by head of programming Chris Albrecht and Carolyn Strauss — developed and launched a string of shows including "The Sopranos", "Six Feet Under", "The Wire", "Sex and the City" and "Deadwood" that made HBO a destination on par with networks. Many critics cite this era and these shows as the golden age of television.

What's even more remarkable is the list of groundbreaking shows that were created in the mold of HBO's prestige lineup that the pay channel passed on. HBO had the first crack at AMC pillars "Mad Men" and "Breaking Bad" as well as Netflix giants and original programming foundations "House of Cards" and "The Crown."

It wasn't so much that passing on those shows led to a hole in programming. HBO still countered a lot of that with mega-hits like "Game of Thrones" and "Curb Your Enthusiasm." It was that HBO allowed those shows to jumpstart the competition.

"In the case of 'House of Cards,' HBO was thinking about doing it, wanted to do it, and then all of a sudden, Netflix is there. HBO is going to do a pilot and Netflix gives them two full seasons," Miller said. "Well, that's one of those clarifying moments where you realize the business has changed and HBO doesn't enjoy the advantages that it used to have."

Even now as HBO enjoys critical acclaim for comedies and drama like "Succession," "Hack," "I May Destroy You" and "White Lotus," they're facing an uncertain future in the next frontier of television — streaming.

With Netflix, Hulu, Amazon Prime, Disney+ and Apple TV all following their prestige and censor-free model to create content, HBO will have to continue to innovate moving forward.

"We're looking at an industry that is in, I wouldn't say chaos, but it's been disrupted so much. And there are so many players trying to adapt and survive and grow that it's unclear how HBO positions itself," Miller said. "I think this is probably one of the most uncertain times for HBO, and I'm not sure that the kind of success that they've had over the past 49 years is guaranteed to them for the future."