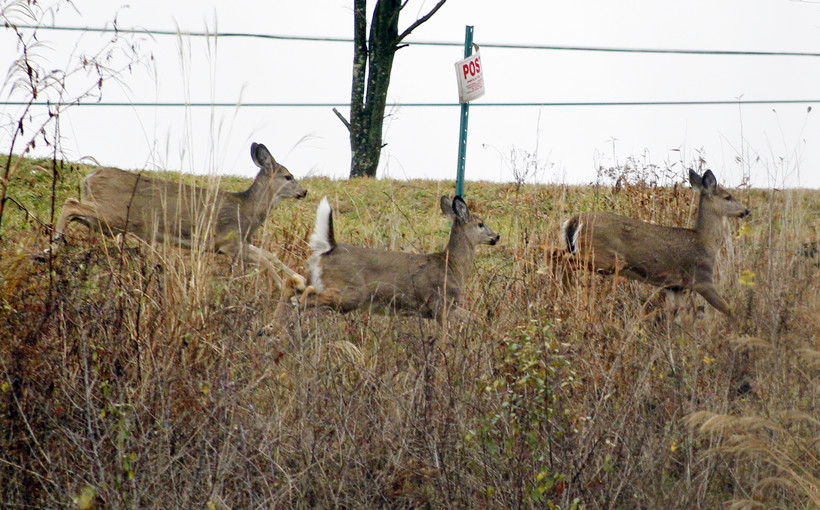 Hundreds Of Escapes From State Deer Farms Reported Since 2013

State records show hundreds of animals have escaped from Wisconsin deer and elk farms over the last five years, raising concerns about the potential spread of chronic wasting disease and highlighting discrepancies in the way state agencies track such incidents.

Escapes from captive deer farms and hunting preserves, where hunters pay to shoot trophy bucks, have been a longtime concern for those worried about CWD, a fatal brain disease, spreading throughout the state. In an interview with WPR, retired veterinarian and former Natural Resources Board chair Dave Clausen called deer farm escapes and the transport of deer carcasses by hunters two of biggest vectors for the disease.

"If you’re going to contain the geographic spread of chronic wasting disease, you need to stop the movement of all infectious material both dead and alive," said Clausen.

According to DATCP, escapes are often caused by things like storm damage to deer farm fencing, vandalism or gates being left open. In many cases, DATCP data says owners reported that animals were returned, captured or shot outside their fenced in homes. In some cases deer were listed as still being on the landscape.

DATCP regulations require that every escaped deer shot outside their respective farms or hunting preserves be tested for CWD. But when asked for test results from all such instances, DATCP assistant legal counsel Sheri Walz responded in an email that those records could only be compiled if agency staff conducted an "on-farm check of farm records for each of the farms with escaped animals."

"The feedback I received is that searching for these records would be a 'needle in a haystack' type of search that most likely will not provide useful information for this request," wrote Walz.

Prior records obtained from DATCP show that two bucks from Fairchild Whitetails in Eau Claire County tested positive for CWD in 2015 after being on the loose for more than five months during the deer breeding season. An email sent Oct. 20, 2015, from former DATCP state veterinarian Paul McGraw alerted Fairchild Whitetails owner Rick Vojtik that one of his deer had tested positive for the disease and that he hadn’t made a decision about informing the public.

"FYI, the escaped deer that was killed last week or so tested positive for CWD," wrote McGraw. "I am working with the Secretary’s Office on whether or not they want to do any communications about this."

Neither the DNR or DATCP agreed to an interview regarding differences in the agencies' recordkeeping on escapes.

In an email, DNR spokesman Jim Dick pointed to different reporting protocols at DATCP and the DNR as a possible cause of the wide discrepancy in escape data.

"It should be noted that we collect data at different points so it is possible the DATCP numbers are different than DNR numbers," wrote Dick.

A note on the escape data from DATCP says that agency’s numbers come from reports made by farm owners, members of the public and DNR staff.

"The escape numbers recorded may not be accurate, as often the owner is reporting the escape prior to full evaluation of the herd," read the note.

For their part, the hunting farm industry maintains that escapes pose little risk.

Whitetails of Wisconsin, the state's deer farming lobbying group, has established a list of best practices aimed at reducing escapes. They include regular checks of exterior fencing, clearing trees near fence lines that could cause damage in storm events and securing gates with latches or chains. The best practices also have recommendations for how to get deer back into the pens as soon as possible.

"Escaped deer are very easy to get back into their pens; it is the only home they know and they are dependent on their food source," the best-practices document says. "The majority of the time they will wander around for a short time but will be back into the enclosure within 6 hours looking for their food source and their pen mates."

"One thing we do want to point out is that our animals pose a very low risk to the free-ranging population (even if there is an escape) due to all the testing requirements we have to abide by," wrote Seale.

But former DNR Secretary George Meyer, who now heads the conservation group Wisconsin Wildlife Federation, was critical of DATCP’s approach to CWD after learning of the agency’s data on deer farm escapes. He said the agency is more interested in protecting deer farmers than it is in keeping CWD from spreading outside fences to wild deer.

"The continuing number of incidents of escapes year after year after year is proof to me as a former regulator that there’s not enough deterrence put in place to ensure that the law, which prohibits escapes, is effective," said Meyer.

According to state statute, DATCP has no authority to issue a compliance action against a deer farm owner for escapes unless there are repeat violations. But farms can lose the ability to sell and move deer offsite if deer escape and are not returned to the farm within five days. Escapes on farms within areas listed as CWD affected must be returned within 24 hours.