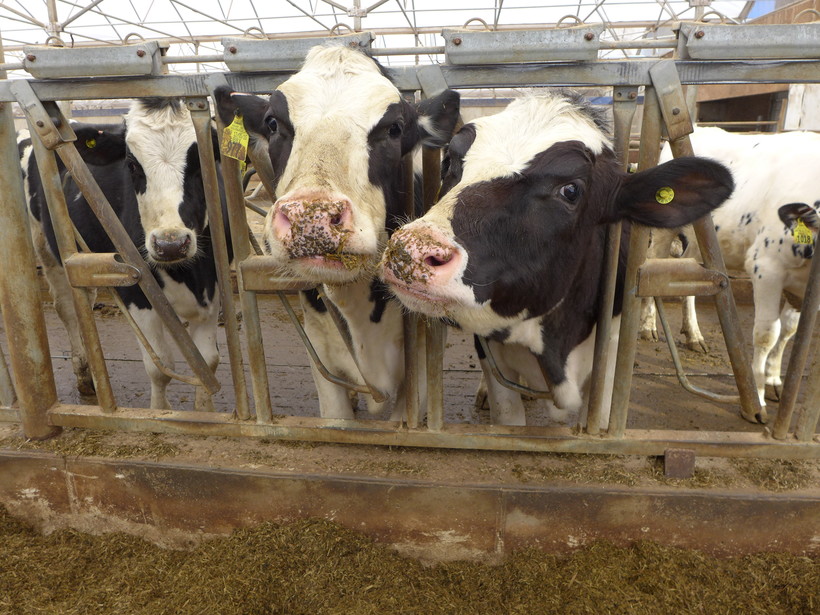 Breeding And DNA Contribute To Rising Milk Per Cow
By Bridgit Bowden
Share:

Last year, the average American dairy cow produced 22,770 pounds of milk. One cow in Waldo, Wisconsin, though, produced more than three times that, setting the national record for milk production.

My Gold, a Holstein from Ever-Green-View Farm, produced 77,480 pounds. But farm co-owner Tom Kestell said she’s a pretty typical cow for his herd.

"She stands in a stall just like everybody else," he said. "No special treatment."

The secret to getting his cows to produce so much milk is good breeding, Kestell said. He makes about two-thirds of his income breeding high-producing cows, and then selling their genetic materials all over the world.

"That is certainly not part of our goal at all is to set a new national record in anything," he said. "Our goal is to take care of our cows, breed good cows, have good cows, sell good cows to other people, and then let the pieces fall where they may." Kestell’s champion cow is an extreme example, but the average amount of milk per cow has shot up since 1950. There are fewer than half as many dairy cows in the United States as there were back then, but now they produce almost twice as much milk. One of the reasons for this huge rise in milk production, said dairy expert Mark Stephenson, is the introduction of artificial insemination.

"We went from natural breeding of cows to artificial insemination of cows, and that let us have better genetic selection of animals than just, you know, what's your best looking bull out of the herd that used to be," said Stephenson, director for dairy policy analysis at the University of Wisconsin Center for Dairy Profitability. Stephenson said better nutrition and management have contributed to the spike in milk production, as well as vaccines and the controversial growth hormone rBST, which makes cows produce more milk. But, he said there's, "much less of that product used today" than when it was first approved in the 1990s.

"No question that is efficacious, a cow will produce more milk if provided that product," Stephenson said. "But, increasingly consumers have been pushing away from that."

Within the last decade, there was another development that changed the industry. The bovine genome was sequenced and published in 2009. Since then, breeding cows based on the properties contained in their DNA has been on the rise.

"Before we could take a look right into the DNA, we were changing the DNA of the cattle," said Ryan Starkenburg, senior geneticist for ABS Global, a large artificial insemination company based in DeForest. "We were selecting bulls that had certain performance."

Starkenburg said one of the problems with high-production cows is they sometimes have trouble reproducing. But with genomics, they can try to breed that out.

"We can actually select for cows that are better milk producers as well as more reproductively efficient and can breed back more easily, calve more easily and so on," Starkenburg said. "So, those animals are hard to find, but once we find them, we can then use the artificial breeding to really spread their genes around the country and around the world."

Tom Kestell of Ever-Green-View Farm, has done just that, selling genetics in dozens of countries. He's seen the dairy industry change a lot since he started milking cows in the 1950s. But, "the goal is the same," he said. "To be able to produce milk as cheaply and economically as you can without sacrificing the well-being of the cow."

Kestell expects it to keep changing and milk production to keep going up. And it needs to, as worldwide dairy consumption is also on the rise.