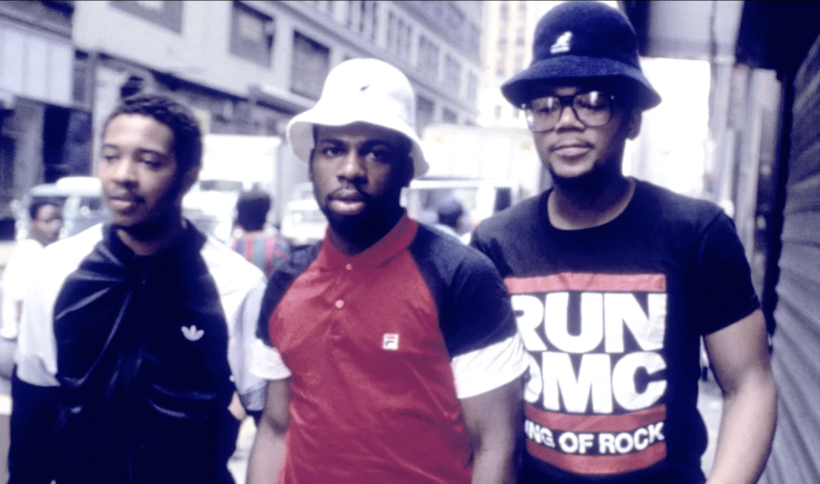 In 1986, Run-DMC were rap superstars while Aerosmith was a '70s rock band on its last legs. But when the two groups teamed up to record a mashup of Aerosmith's "Walk This Way," they changed the course of music history. The Washington Post’s Geoff Edgers documents the saga in his book, "Walk This Way: Run-DMC, Aerosmith, and the Song That Changed American Music Forever."

The original version of "Walk This Way" was featured on Aerosmith's third album, "Toys In The Attic."  The band recorded the album at the Record Plant in New York City. They had basically finished recording the album, except for one catchy backing track that they had not yet written the lyrics for. So the band members and producer Jack Douglas decided to get some fresh air and took a walk to Times Square.

"So they walk around that whole day and for some reason, they went and saw 'Young Frankenstein,' the Mel Brooks movie," Edgers told WPR's "BETA."  "And if you remember that scene, Igor meets Dr. Frankenstein. He met him and he said, 'Walk this way.' And you know, he's all hunched over. I don’t know if that's a PC joke anymore but then Dr. Frankenstein hunches over. And so when they got back in the studio, they thought that was hilarious. And that became the chorus."

"The song itself is really, it’s almost like a pre-rap rap. It’s got the rhythms of like a hip-hop song in some weird way, the way (Aerosmith lead singer) Steven Tyler does it," said Edgers.

It's impossible to determine who came up with the idea for this historic collaboration between the band and Run-DMC, Edgers said, but his reporting indicates that it was probably a combination of three people who were friends.

"The person who gets credited the most is Rick Rubin, you know, the super producer who produced the record. But Rick Rubin was also talking to Sue Cummings, who was an editor at SPIN Magazine. And she was talking to a guy named Tim Sommer, who was a friend of Rick Rubin's from (New York University). And I think it was one of those conversations where like Rick Rubin had an idea that melding rock and rap was going to be a good idea. Somebody in the mix said 'Well, why don’t you get the guys from Aerosmith?' which Rick Rubin, I think, thought sounded crazy. He loved Aerosmith from the '70s and they were heroes to him. And since nobody had done this before, it didn’t sound like he’d be able to get Aerosmith. He was like, you know, Tyler and (lead guitarist Joe) Perry won’t do that."

The opening "Walk This Way" beat had been used for years in hip hop.

"But the thing that's important is that nobody in hip-hop used the song to the point that the lyrics came in," Edgers said. "So like when Steven Tyler started singing, that song was done. And you were a bad DJ if you allowed it to get to that point. So one day, Rick Rubin walks into the studio and he sees Run (Joseph "Run" Simmons) and D (Darryl "DMC" McDaniels) there and he says, 'What are you doing?' And they’re like, 'Oh, we’re just working on a song.' And they had 'Walk This Way,' the beat, on the turntables. And they were doing what they wanted to do. They had the beat and they were going to do like 'We’re Run-DMC/It’s a place to be.' They were going to do their own rap over the beat. And Rick Rubin said, 'You know that’s Aerosmith, right?' And they’re like 'Who?' They didn’t actually even know it was Aerosmith because the way the DJs did it is they took a record and they would scratch out the song title because they didn’t want people to steal their beat. So what they knew was 'Hey, this is number four, Toys in the Attic."

Rick Rubin gave Run and D  the record, a notepad, and told them to go listen to the song in D's basement and transcribe the lyrics.

"When they heard it for the first time, what they said was 'This is hillbilly bull-bleep.'"  (Editor's note: See footage of the recording session below)

"Walk This Way" became the first rap song to be played on mainstream rock radio. It also revived Aerosmith's career.

Edgers said that this collaboration changed our culture.

"Hip-hop became part of our culture, which it hadn’t been before. So 'Yo! MTV Raps' emerges after that. On TV, you’ve got 'The Fresh Prince of Bel-Air.' You’ve got 'In Living Color,' you’ve got Arsenio. And, you know, on that record, 'Raising Hell,' it’s the first hip-hop merchandising deal, which is 'My Adidas.' And Adidas paying Run-DMC a million dollars to market their sneakers."

"Hip-hop, which had been like a secret and on college radio," said Edgers, "suddenly became the central way that our culture processes art and music."

Editor's note: Below are two video clips of the recording sessions. Some of this footage contains graphic language.

Walk This Way: Run-DMC, Aerosmith, and the Song That Changed American Music Forever