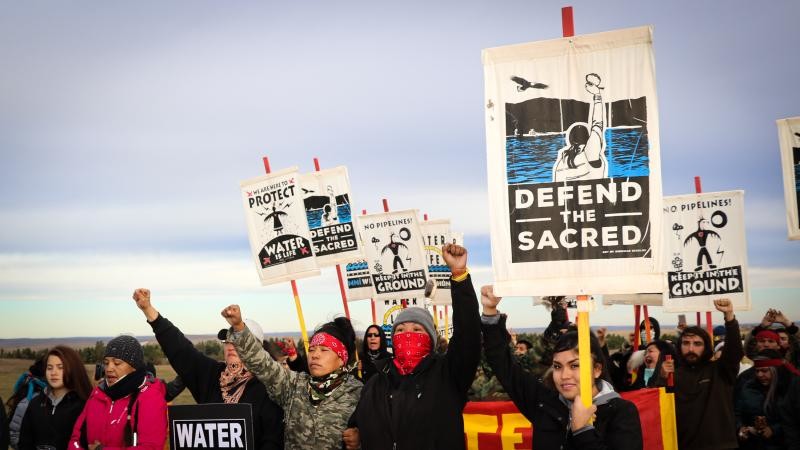 The Land Back movement in Canada has taken off like wildfire. And not just sit-ins and protest camps and marches — it’s also white Canadians giving land back to Indigenous people — in wills and trusts and even land transfers. The question is this though: will the Canadian government follow suit?

Hayden King co-wrote the foundational text for the movement. "Land Back" lays out the present state of how Indigenous people of Canada have been dispossessed of their ancestral lands, as well as what different communities there are doing to right the wrongs of colonialism and co-create a more just future. King is the executive director of the Yellowhead Institute, and is a member of Beausoleil First Nation on Gchi'mnissing, an island off the Georgian Bay of Lake Huron.

Having just returned from a trip to the wilderness to reconnect with the land, King spoke to Charles Monroe-Kane of "To the Best of Our Knowledge" to learn more about how he reconnects to nature and what land means to him.

Hayden King: I try to refer back to Anishinaabe thought and philosophy and, importantly, language when I'm thinking about land.

The English language sort of trains you to think about land as this static concept, almost as a commodity — something that you own or buy or sell, or something that you extract resources from. But in our language, Anishinaabemowin, the word for "land" is commonly referred to as "Aki." The root of that is actually "Akina" — the closest literal translation to that is "everything in unity."

And so when you think about land on those terms, as this unifying force that binds us all and connects us all, then you start thinking of land in different terms. In a lot of Indigenous languages and philosophies and Indigenous law — certainly Anishinaabe law — land is something that is alive and has agency and certainly must be respected, and that includes respecting maybe even the sovereignty and self-determination of land.

So that's how I like to think about land. I would be lying if I didn't say that that takes work, right? This is sort of part of the decolonizing that we all need to do in our relationship to land.

Charles Monroe-Kane: When you read about the Land Back movement, you find a bunch of word associations, you just brought one up: decolonization. There's also reparations, reconciliation. It seems like Land Back is a lot more than just, you know, giving land back.

HK: Probably the single loudest demand among Indigenous people since the relationship to settlers emerged was this demand for land back from land theft and from dispossession. And I think that that's entirely valid. We want to get land back almost universally. That's what Indigenous people will say.

CMK: I want to ask you a question, and I don't mean it to be so elementary or for it to be even painful for you, but I think we need to remind people that this is your land. How did you lose it?

HK: The language that I might use is "how it is taken away." It's clear that the discussion is a lot about words that we use, and I think that this is an important one.

The principal institution between Indigenous and non-Indigenous people in Canada, and in the United States, is the treaty — they are very much these nation-building tools that allowed for the settlement of the country. But really in retrospect, these treaties were vehicles of dispossession, and in many ways, and as states and provinces and territories legitimized their rule, Indigenous perspectives were marginalized. That hoped-for collaborative relationship disappeared, and states started working toward eliminating the political threat that Indigenous peoples presented to those states and provinces and entire countries. That meant things like assimilation policies and Indian wars and residential schools, industrial schools, boarding schools. And then this very long period of suppression of Indigenous political difference.

So in a lot of ways, what you're seeing now with the revitalization of the Land Back movement is a century coming.

It's not necessarily that we're asking the Canadian government for the land back and the Canadian government just says, "Sure, we'll give you the land back." It's more about confronting state power, police, resource companies, corporations — putting our bodies in the path of bulldozers. I mean, you saw that at Standing Rock and a lot of ways that forces confrontation, but also forces negotiation.

CMK: I read your report and a bunch of stuff online, including about the Nunavut Land Claims Agreement. Didn't those claims give sovereignty to the land?

HK: In the Nunavut case, the Inuit in the far north of Canada approached the government and said, "Listen, we've never created a treaty with you. You're illegally squatting on our land. So let's create a treaty and figure out what our relationship is to one another. We'll talk about self-government. We'll talk about land rights. We'll talk about programs and services for education and so on."

And in that case, the federal government had been compelled by a court decision to make treaties where there were no treaties because as the courts effectively agreed with Indigenous people in Canada — that where there are no treaties, people are illegally squatting. They didn't say it in those terms, but effectively they agreed with that perspective. And so Canada was forced to make new treaties.

Now, there's a lot of debate about whether the Nunavut agreement or any modern treaty has actually facilitated a transition to Indigenous self-government, (but) there is certainly more control over local governance issues. I think if you speak to Inuit folks in Nunavut, they'll have a lot of complaints about how that treaty has been implemented. Nonetheless, that's an example of a sort of state-sanctioned treaty-making process that offers some degree of self-determination or self-government back to an Indigenous community and some degree of land back to an Indigenous community.

CMK: Let's talk about national parks. What about having them being turned over?

HK: You know, the history of the park system in the United States and Canada is a pretty violent one.

Some of the first parks in the United States, Yosemite and Yellowstone, were created under this belief that people were separate from nature and wildlife. So the Indigenous people that lived in these places where parks were proposed to be created, they had to be relocated, right? They had to be removed.

And so in Canada, the first provincial park in the province where I live, Ontario, is called Quetico Provincial Park. The government forced Indigenous people in those parks to leave and, in fact, one of the communities that they forced to leave was declared extinct 20 years later.

And so now there is a latent movement toward talking about co-managing some of those lands. There's a park in Labrador, a park in Northwest Territories, where Indigenous people have significant involvement in how those parks are managed. But if you're asking me if I think handing over these parks to Indigenous peoples exclusively and having the management of those spaces is a good idea, I think that, yes, absolutely it is.

And I think practically, if you're interested in the Land Back movement from a policy and a legal perspective, are you going to go to private landowners and tell them they have to give their land back to Indigenous people? Or maybe are you going to look at some of these vast areas of federal lands that could be transferred to Indigenous people and have those folks manage them?

I think that that's a wonderful idea and I support it wholeheartedly.

CMK: If I'm looking at the map of Canada, what would change if the Land Back movement was successful?

HK: The vision of Indigenous people, or at least the Anishinaabe people, has always been looking at the land as a basket or a bowl. We all live in that bowl, we share the spoon, we pass it to one another, and we eat from it together. And so there's nothing in an Anishinaabe perspective about living on the land without other people.

Sometimes we can get stuck when we look at maps — this is one jurisdiction's territory and this is another jurisdiction's territory. But moving toward an Indigenous approach to our relationship to the land might mean that the map has many layers. It has those layers of provinces and territories, but it also has those layers of Anishinaabe governance of the Great Lakes. And that exists. There's lines on lines on lines.

CMK: And maps can be three-dimensional.

HK: Yeah, I think through time and space, absolutely. And it's less about who owns the land, and it's more about how you relate to the land.

Would you like to know what Indigenous land you're on? Check out the online map created by the folks at Native Land Digital. You can search it by zip code or address. They also have iOS apps — if you are in Canada, check out Whose Land. If you are in the U.S., check out Native Land.