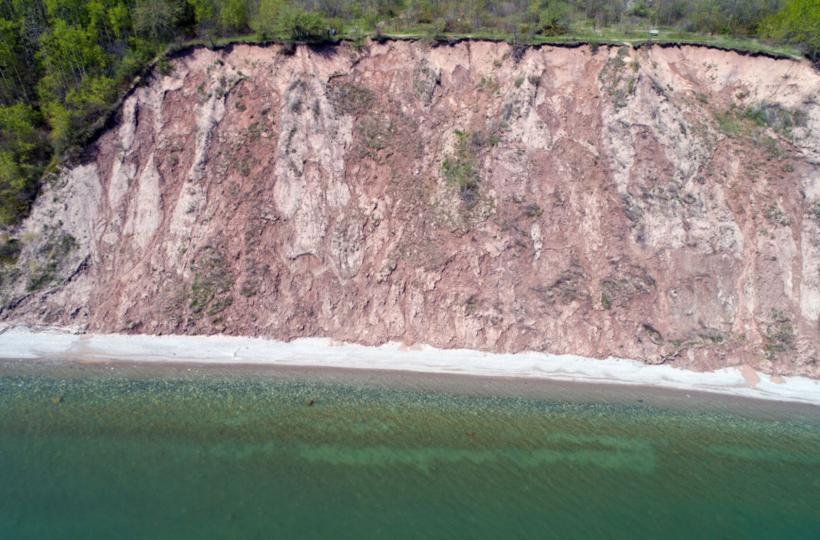 A large bluff is failing at Lion's Den Gorge Nature Preserve in Ozaukee County due to higher water levels on Lake Michigan. Photo courtesy of Luke Zoet of University of Wisconsin–Madison

High water levels on Lake Superior and Lake Michigan in recent years have been spelling trouble for some shoreline communities. The increase in lake levels has caused beaches to erode and threatened roads and properties near lakefronts.

In one town on Lake Superior, higher lake levels have made damage from storms even worse.

Beverly Steele is chairwoman of the Town of Clover, which is more commonly known as Herbster on the south shore of Lake Superior. She said high water levels caused significant erosion about three years ago that affected residents on Bark Point and crept up near the road providing access to the lake. When a storm hit late last fall, Steele said it undermined the road and "threw blacktop around."

"When we first had the little erosion that was threatening the road, the old timers said, 'Well, just let nature take its course because it always heals itself,'" she said. "This time it didn’t heal itself."

The total cost to repair the road is estimated to run around $299,000. Steele said the town is able to access state funds to assist with repairs, but they’re still looking at paying $125,000 to repair Bark Point Road, which is about a quarter of the town’s annual budget. If the town repairs the road this year, Steele said they may have to increase the town’s tax levy to help pay for the project.

"We’ve certainly noticed that the water level was higher at our marina — our floating docks were a lot higher," he said. "From one perspective, it’s good we don’t have to worry about dredging."

He said levels don’t appear to be as high this year. The U.S. Army Corps is projecting lake levels will be about five to nine inches lower over the next six months than the same time period last year on Lake Superior.

On Lake Michigan, the recent rise in water levels has prompted a study to examine coastal erosion of bluffs. Researchers there are using instruments to monitor bluffs along the coastline in Mount Pleasant and Ozaukee County with the hopes of pinpointing areas most prone to landslides from instability due to erosion.

Luke Zoet, an assistant professor of geoscience with the University of Wisconsin–Madison, said they’ve placed instruments called extensometers to gather data on the movement of bluffs that are experiencing erosion.

"We’re seeing the general steepening of bluff all up and down the coastline. It’s just the effects that that bluff erosion is having on people and infrastructure is more severe in Mount Pleasant and areas to the south where the bluffs aren’t quite as tall than it is right now to the north where the bluffs are significantly taller," he said.

When the bluffs become steeper due to erosion, Zoet said they become out of balance and prone to small-or medium-scale landslides.

"That becomes problematic because if people have built things really close to the top of the bluff, close to the edge, when the slope starts moving back to the stable slope, things that are at the top can fall in," he said. "That can include houses or roads or infrastructure that cities have built."

Zoet said they’ve also mapped 15 to 20 miles of the coastline by taking pictures using drones as part of the study. He said that will help them develop three-dimensional models of the bluffs. The models along with data collected will be incorporated into a program used by the U.S. Geological Survey that’s designed to predict landslides.

Zoet said the study will also help demonstrate how much sediment is contributed to the lake by bluff erosion. Zoet is working in collaboration with Elmo Rawling, a faculty member at the Wisconsin Geological and Natural History Survey. The study is funded by Wisconsin Sea Grant.