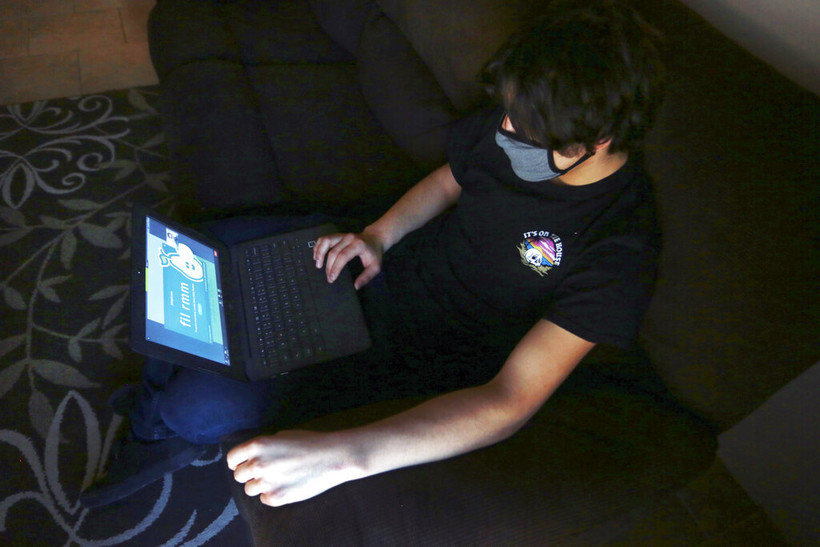 Javin Lujan Lopez, 17, a senior at at Pojoaque High School logs into a remote learning site on his laptop, at his home in Espanola, N.M., Feb. 22, 2021. Cedar Attanasio/AP Photo

With the number of new positive cases of COVID-19 on par with what Wisconsin was seeing last winter, parents and guardians are worried that the coronavirus is going back into the classroom along with their kids.

A growing number have decided to put their kids in virtual programs.

Several school districts set up new online school programs after seeing its success with some learners last school year and in anticipation of some families not being ready to send kids back fully in-person.

The Madison Metropolitan School District established Madison Promise Academy, a virtual program that Executive Director of Library and Technical Services T.J. McCray said had been top of mind since he was hired four years ago, but was jump-started by the pandemic.

"One of the things I always said four years ago was that we should have had a virtual presence, because I’ve seen what virtual learning can do for so many students," he told WPR. "With COVID, what it showed was that we had students that were just achieving, and thriving, and succeeding (virtually and) that door just opened up for us to be able to create some of the opportunities."

Initially open only to middle- and high-schoolers with plans to expand in later years, Madison Promise Academy announced it would start taking pre-kindergarten through fifth grade students last week.

About 750 families applied for the elementary online program between when it opened last Thursday and the noon Monday application deadline — far more than the 150 students MMSD had initially planned for.

The upper grades, which had a longer application period, attracted 452 applications to a program that was capped at 250 students. District officials told The Cap Times that it planned to offer enrollment to 234 applicants.

In a media briefing last week, Madison school district officials didn’t say how many — if any — staff positions remained open at Madison Promise Academy, though they did say there were 138 total open positions with the school district, 69 of them teaching jobs.

Green Bay Area Public Schools opened a virtual program for pre-kindergarten and elementary schoolers. Green Bay students in grades 6 and up who want a virtual option can enroll in a district charter school that predated the pandemic.

Green Bay spokesperson Lori Blakeslee said there are 153 students enrolled in the district’s elementary school virtual option. An additional six are on the waiting list because they applied after Green Bay closed enrollment at 5 p.m. Wednesday. The school has eight staff members assigned, including a special education staff.

Blakeslee said enrollment numbers for the pre-K-5 virtual option were a moving target.

"We weren’t sure what to expect," she said. "Obviously, the closer school’s gotten, we’ve gotten a lot more enrollments, I think as masking decisions have shaken out around us as well as people kind of seeing where the COVID numbers are headed."

Arms said he didn’t have details on how many teaching positions were needed for the virtual program or how many of those positions are currently filled.

Virtual programs that were around before COVID-19 closed schools in 2020 aren’t seeing the massive increase of last school year, but with growing concerns over the delta variant, families whose districts aren’t offering a virtual program could still keep the schools’ enrollments higher than they were pre-pandemic.

"Pre-COVID, ARISE’s enrollment might be around 200, so it’s up, but only slightly," he said at a Janesville school board meeting Aug. 24. "Parents understand that kids learn better when they’re at school."