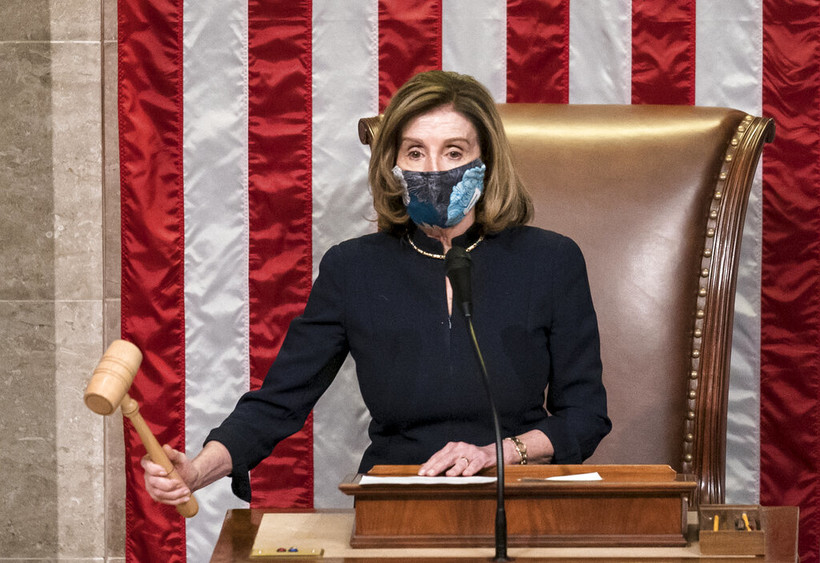 Speaker of the House Nancy Pelosi, D-Calif., leads the final vote of the impeachment of President Donald Trump for his role in inciting an angry mob to storm the Congress last week, at the Capitol in Washington, Wednesday, Jan. 13, 2021. J. Scott Applewhite/AP Photo

Wisconsin's Congressional delegation split along party lines Wednesday on the bipartisan vote to impeach President Donald Trump over his role in inciting the deadly Jan. 6 insurrection at the U.S. Capitol.

In statements, press conferences and speeches on the floor of the U.S. House of Representatives, House members weighed in on the historic second impeachment of a sitting president.

The vote Wednesday afternoon came one week after a mob of violent Trump supporters stormed the Capitol in an effort to disrupt the counting of Electoral College votes — and less than one week before the inauguration of President-elect Joe Biden.

Wisconsin voices in the debate Wednesday ranged from fiercely pro-impeachment Democrats like U.S. Reps. Mark Pocan, D-Madison, and Gwen Moore, D-Milwaukee, to staunch defenders of Trump, including Republican U.S. Reps. Glenn Grothman, R-Glenbeulah, and Tom Tiffany, R-Hazelhurst. Other members of the state delegation said they were conflicted about their votes before ultimately voting with the majority of their parties.

The House voted 232-197 to impeach Trump, with four GOP abstentions. Ten Republicans voted for impeachment. Trump will face a trial in the U.S. Senate, but Senate Majority Leader Mitch McConnell said he wouldn't convene the Senate before the end of Trump's term. 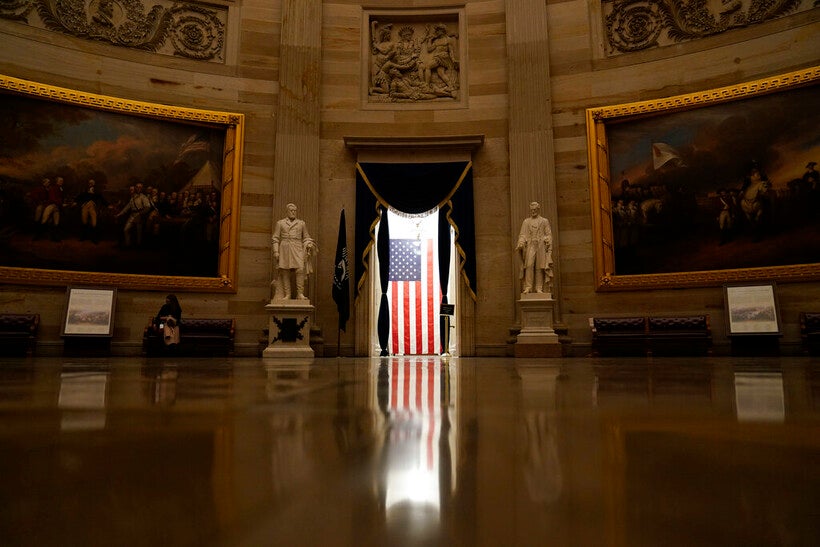 Light shines on an American flag as seen from the Capitol Rotunda in Washington, Wednesday, Jan. 13, 2021. President Donald Trump was impeached by the U.S. House for a historic second time Wednesday, charged with "incitement of insurrection" over the deadly mob siege of the Capitol in a swift and stunning collapse of his final days in office. Susan Walsh/AP Photo

In a speech on the House floor, Tiffany said he condemned the violence but called impeachment "political theater."

"Joe Biden has talked about unity and healing," Tiffany said. "Is that what this is today?"

Tiffany supported efforts to overturn the election, and voted to do so after the Jan. 6 mayhem. He and U.S. Rep. Scott Fitzgerald, R-Juneau, told the Milwaukee Journal Sentinel that they would have voted to throw out Wisconsin's electoral votes had U.S. Sen. Ron Johnson joined their objections.

In a press conference before voting for impeachment, Democratic U.S. Rep. Ron Kind of La Crosse said he did view impeachment as a necessary part of the healing process.

"It's going to be hard to begin reconciliation and healing ... if there isn't accountability to all of this," Kind said. "For those who are saying, well, time to just move on, let bygones be bygones — that is not going to help the type of healing our nation needs right now."

Here's how Wisconsin’s delegation voted, and what they said about it:

Explanation: "The violence I saw firsthand last week is intolerable and unacceptable but ... impeachment (is) not the solution," Fitzgerald said in a statement. He called impeachment "just one more divisive and political act."

Explanation: Before the insurrection, Gallagher was critical of efforts by Trump and other Republicans to overturn the election. He did not speak on the House floor on Wednesday, but this week signed onto a letter calling impeachment "as unnecessary as it is inflammatory."

Explanation: In a floor speech, Grothman said he strongly objected to impeachment and called the claim that Trump incited violence "preposterous." He said most of the protesters were peaceful and that they were "scared to death that we're going to go back to days without Donald Trump."

Explanation: "This impeachment vote not only sets a horrible precedent for future administrations, but it further divides the country," Steil said in a statement.

Explanation: In a floor speech, Tiffany said the House under Speaker Nancy Pelosi "is not a serious place" and asked Biden to "call off this effort to rub salt in the wounds of millions of Americans."

Explanation: In a press conference, Kind said he had been ambivalent about the vote given the short window of time between introduction of the impeachment article and the vote, as well as Trump's brief time left in office. He decided to vote for impeachment, he said, because he "believe(s) that the president still presents a clear and present danger to the safety of our country." But Kind framed the vote as not a matter of partisan politics.

"At this moment in history, to me there are only two parties that matter," Kind said. "Not a Republican or a Democratic Party, but the party of constitutionalists or the party of insurrectionists."

Explanation: "The president radicalized American citizens, and as his vice president fled from a lynch mob, and the (House) Speaker cowered, while people died, he watched with glee," Moore said in a speech on the House floor. "Seven days is too long for him to be in power."

Explanation: In a press conference, Pocan said he hoped impeachment would help the nation to heal. "You have to have accountability in order to have unity," he said. In a floor speech, he called Trump "unfit" and said he was "responsible for inciting the attacks on our democracy."