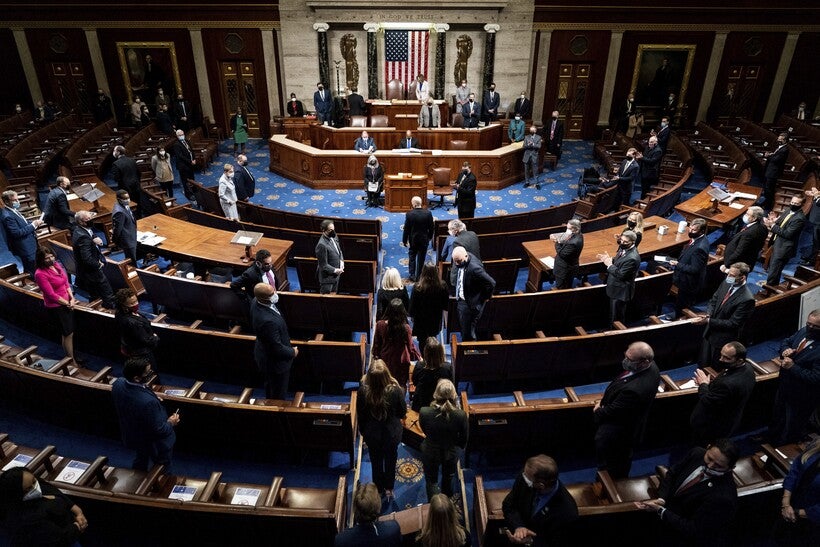 Wisconsin US Reps. Tiffany, Fitzgerald Object To Some Biden Electors

Vote Was Made Possible By Senators, Including Wisconsin US Sen. Ron Johnson
By Shawn Johnson
Updated:
Thursday, January 7, 2021, 4:00am
Share:

Their votes came hours after the U.S. Capitol was cleared by law enforcement, and after lawmakers returned to the House and Senate chambers under heavy armed guard.

Tiffany raised the prospect of objecting to some Biden electors in a statement issued Tuesday, while Fitzgerald kept his vote — one of his first as a member of Congress — under wraps until Wednesday night.

The normally mundane process of counting Electoral College votes began Wednesday morning in a joint session of Congress, shortly before the insurrection of the Capitol by a mob of Trump supporters.

Under the rules of Congress, any objection to Electoral College votes must be signed by both a member of the U.S. House and the U.S. Senate. Before violence struck the Capitol complex and Capitol building, Johnson was one of eight U.S. senators who signed an objection to Arizona's electors.

Once those signatures were registered, the Senate and House each debated in their own chambers about whether to block the electors. That debate was happening when lawmakers were forced to abruptly leave the chambers.

When lawmakers returned Wednesday evening, the vote to overturn Biden's Arizona electors failed 6-93 in the Senate. Despite Johnson's signature clearing the way for the debate, he did not vote to overturn the electors.

Johnson did, however, issue a written statement that he said was the speech he would have delivered before the Capitol violence.

The statement made repeated allusions, without evidence, of a variety of voter fraud, calling the people who had lost confidence in the election "patriots" and saying they "heard" reports of everything from "large Democrat-controlled counties" dumping ballots to Facebook CEO Mark Zuckerberg spending money to "increase Democrat turnout in Democrat-controlled jurisdictions."

"Is it any wonder that so many have lost confidence in the fairness of our election system and question the legitimacy of the result?" Johnson said in the statement.

Wisconsin Democratic U.S. Sen. Tammy Baldwin did not speak during debate, but issued a brief statement on Twitter blaming Trump for Wednesday's violence.

"Everyone in Congress should put country over party and condemn Trump for starting this attack," Baldwin said. "Let's stop it by getting back to our job of accepting the election that Trump clearly lost and Biden won."

The vote to overturn Arizona's electors failed 121-303 in the House.

Johnson did not sign the objection to Pennsylvania's electors, which failed by by a vote of 7-92 in the Senate and 128-282 in the House.

Both Tiffany and Fitzgerald issued statements condemning Wednesday's violence at the Capitol, but neither spoke during the debate on the Electoral College. Both are among the newest members of Congress, with Fitzgerald having been elected in November to replace former U.S. Rep. Jim Sensenbrenner and Tiffany winning a May special election to replace former U.S. Rep. Sean Duffy.

"Is the objection in writing and signed by a member and a senator?" Pence asked Gohmert.

"It is in writing," Gohmert responded. "It's signed by a member, but it is not signed and objected to by a senator."

Pence ruled that the objection could not be entertained, and Wisconsin's 10 electoral votes were counted for Biden.