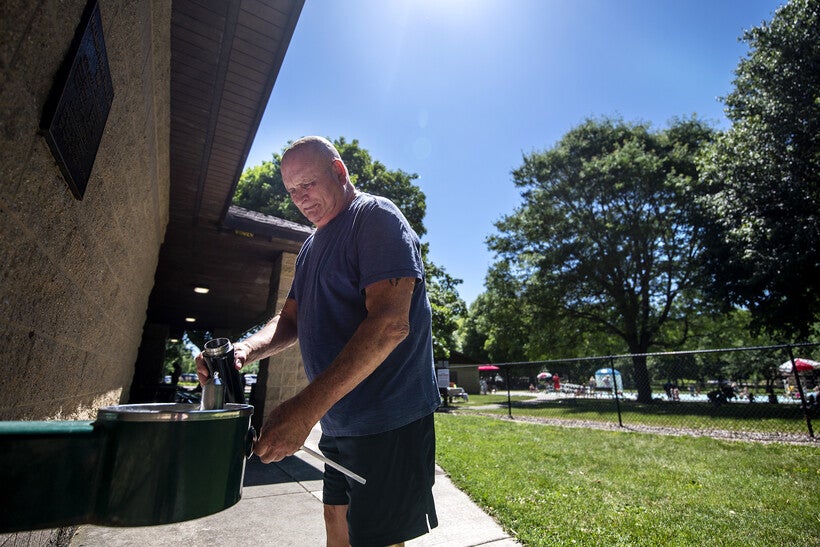 Mark Ellis takes a break from riding his bike to fill up a water bottle Monday, June 20, 2022, in Janesville, Wis. Angela Major/WPR

Heatwave leaves much of Wisconsin sweltering Monday and Tuesday

Temperatures will feel like 100 degrees across most of the state
By Danielle Kaeding
Updated:
Monday, June 20, 2022, 4:40pm
Share:

Wisconsin could see record-setting heat Monday and Tuesday as much of the state is under a heat advisory Monday.

The majority of Wisconsin will see high temperatures in the 90s Monday, and muggy conditions will make it feel closer to 100 degrees. Even areas near Lake Superior could set records for this time of year, said Bryan Howell, a meteorologist with the National Weather Service office in Duluth, Minnesota.

"We're just really not used to that kind of heat in this part of the country," Howell said. "That's going to make heat exhaustion very possible, maybe even some heat stroke if you're outside, so (these are) just very oppressively hot conditions that are not normal."

The typical high temperature for Duluth this time of year is in the low 70s. As of noon Monday, Duluth set a record high of 90 degrees, breaking the previous record of 88 degrees in 1995. In northern Wisconsin, Ashland could break a record of 98 degrees set back in 1909.

"We're definitely going to make a run at it," said Howell.

Howell said a dome of heat has settled over the Midwest that’s bringing southerly winds and a lot of heat and humidity. As that moisture moves east, record-setting heat is also possible for Milwaukee and Madison on Tuesday, said Kevin Wagner, a meteorologist with the National Weather Service office in Sullivan.

"The forecast temperatures for tomorrow will be some of the hottest that we've seen in a long time," Wagner said.

On Tuesday, Milwaukee could surpass a record of 101 degrees, and Madison could top its 100-degree record for June 21 set back in 1988. Wagner said the last time Milwaukee reached 100 degrees was in 2012.

"It's going to feel a lot hotter. We're looking at feel-like temperatures exceeding 100 degrees in most of the state for tomorrow, mainly in the east," Wagner said.

Today will be warm, but the humidity really builds tomorrow, when heat indices are expected to be between 100 & 105 degrees. Be sure to take breaks & drink plenty of water if outdoors. In addition, a few t-storms may form Tuesday evening, with a risk for gusty winds & lightning. pic.twitter.com/tBerBBkhUg

Brittany Caple and her 3-year-old son, Abraham, were trying to beat the heat Monday at a pool in Janesville.

Extreme heat kills more people nationwide than any other weather event, National Weather Service data shows. Meteorologists are urging people to stay hydrated and take frequent breaks if they’re working outdoors. They also advise people to seek out cooling shelters and check on older adults and children who are most susceptible to extreme heat.

Last week, the Milwaukee County Medical Examiner said two people had died due extreme heat, including a 39-year-old woman and an 89-year-old man. Preliminary data from the Wisconsin Department of Health Services shows nine people died from heat-related causes from May 1 through September 30 last year. Another 803 people received treatment for heat-related conditions at emergency rooms during that time span. 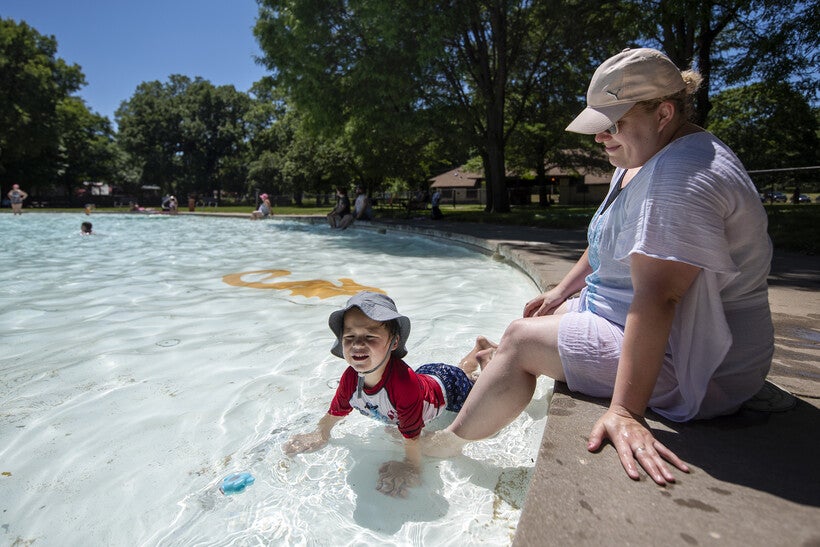 Brittany Caple, right, and her 3-year-old son, Abraham, cool off in the pool Monday, June 20, 2022, at Palmer Park in Janesville, Wis. Angela Major/WPR

Heat-related deaths are often underreported, said Jonathan Patz, the Vilas Distinguished Professor in the Nelson Institute for Environmental Studies and Population Health Sciences at the University of Wisconsin-Madison.

"A lot of times you don't see the underlying issue being heat, so it's underreported," Patz said. "A recent re-analysis of heat deaths in the United States finds that about 12,000 Americans die every year from heat waves."

Warmer days and warmer nights can lead to 'dangerous conditions'

Heat waves are expected to become longer and more frequent in the future due to climate change.

In Wisconsin, temperatures have increased by around 3 degrees since the 1950s and are expected to warm between 2 and 8 degrees Fahrenheit by mid-century, according to the latest report from the Wisconsin Initiative on Climate Change Impacts. 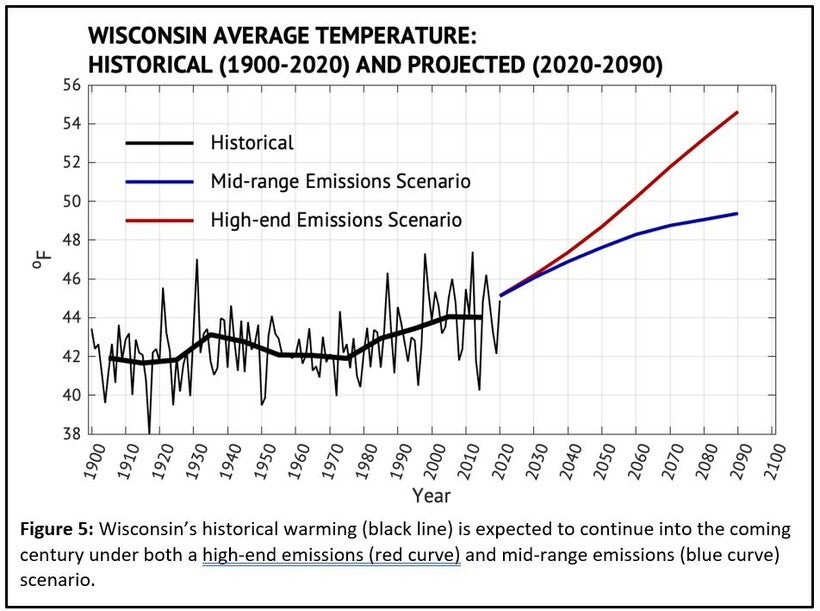 In the summer, the number of days hotter than 90 degrees is likely to triple in Wisconsin by mid-century. Milwaukee could see three times as many days with a heat index above 105 degrees by 2050.

Researchers say Wisconsin is actually seeing more extreme heat at night. The state is likely to see four times as many hot nights where the temperature doesn’t drop below 70 degrees.

"When there's a lot of humidity in the air, that daytime heating doesn't dissipate at night as easily," said Steve Vavrus, a senior scientist with the Nelson Institute Center for Climatic Research at UW-Madison. "It’s like putting a heavier blanket on us at night, and so we can't cool off. That’s when we get into these somewhat dangerous conditions at times during heat waves."

With no relief at night, Vavrus said heat can take a toll on people’s health, especially if they lack air conditioning. He also noted many communities don’t have cooling centers that are open at night.

Communities can adopt different strategies like more tree cover and green space. Vavrus said too much asphalt and too many concrete buildings create a recipe for heat stress.

Recent research has also shown a link between extreme heat and redlined communities, Patz said. Redlining refers to discriminatory lending practices through the use of government maps developed in the 1930s. They outlined areas with racial and ethnic minorities in red that were deemed too risky for investment.

"Redlined neighborhoods forced African Americans to locate in these undesirable parts of the city and undesirable maybe because they didn't have green space," Patz said. "They may have been zoned for industry and roadways, and so these are things that most people will not want to live near. And, they turn out to be very heat-retaining surfaces."

Milwaukee is among 14 cities nationwide that will map the hottest parts of their communities this year as part of research funded by the National Oceanic and Atmospheric Administration.

The rest of the week is expected to be drier and cooler across Wisconsin, but temperatures are still expected to be above normal with highs in the 80s.