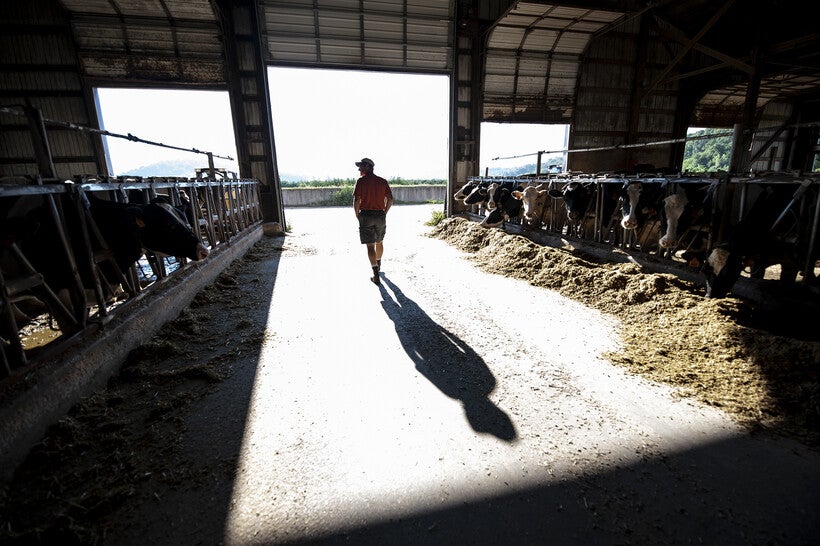 As heat returns to Wisconsin, farmers work to keep their cows cool

Heat stress can be deadly to beef and dairy cattle. So farmers help cows beat the heat with more airflow, water, shade.
By Hope Kirwan
Share:

Mitch Breunig, owner of Mystic Valley Dairy in Sauk City, started preparing for this week’s extreme heat days ago by giving his barn fans a tune-up.

"I made sure the belts are tight and cleaned the blades to make sure that they're operating at maximum efficiency. So when it gets hot today, you know we're not looking in the barns and saying, 'Oh we’ve got four fans not running,' because once it’s hot, it’s too late," Breunig said Monday.

With the extreme temperatures, dairy and livestock producers are doing everything they can to keep their animals cool and help them avoid heat stress.

In addition to the fans, Breunig has a sprinkler system in his barn that sprays his cows every three and half minutes. Like many animals, cows don’t sweat, so the evaporative cooling can help the animals release some heat.

Breunig said the milking center is probably where his cows feel the heat the most.

"They're a little bit closer together, and it's like standing next to your neighbor on the beach. You know, it's not great," he said. "And so we do the same strategy there. We have a shorter cycle and we're getting the cows wet down to the skin."

Breunig said it’s been unusual to see so many periods of 90-degree temperatures this early in the summer. He worries that could mean more hot spells are still to come.

Wisconsin isn’t the only state feeling the heat this year. In Kansas, at least 2,000 head of cattle died earlier this month when temperatures went from the 80s to well over 100 degrees in a matter of days.

Dan Thomson, a veterinarian who specializes in cattle health at Iowa State University, said a major reason why Kansas' hot spell was so deadly was because the heat didn’t subside at night. Thomson said cows rely on cooler overnight temperatures to get rid of the heat that has built up in their body throughout the day.

"As long as cattle are able to dissipate the heat and cool at night, and lose that accumulated heat load and start over the next day, cattle tend to get along just fine," Thomson said. "It's these times where we have high humidity and high temperatures at night and these cattle can't… offload the accumulated heat in their body that we start to see these issues with health."

Thomson said increasing air flow during high heat is essential. He said some beef producers will even build mounds for cattle to climb in order to catch a breeze above a fence line.

He said some farmers will also change when they feed their cows, switching to evening feedings to allow the animals to digest during the coolest part of the day.

Brady Zuck, a beef producer from Ladysmith and president of the Wisconsin Cattlemen's Association, said other care strategies are the same as they are for humans — keeping animals hydrated and allowing them to get out of the sun.

"Some folks will put additional watering tanks in the pens to have more access to water. Shade is important — to have access to shade — if they’re cattle on pasture, under trees or in a barn" he said. "Most farmers are really watching that forecast and getting prepared well ahead of these challenges from the heat."

Zuck said it’s extremely rare to see a large number of animals die because of a heat event such as the one Kansas.

"I call our cows kind of like Olympic athletes. You’ve got to keep them hydrated and fed and in a situation where they can do their job," Breunig said. "If you don't, we'll end up with less milk and cows that won't breed and so it really messes up your production cycle if you let them get too hot."

Thomson said farmers also have to apply some of the same heat strategies for themselves and their employees. That means wearing hats and long sleeves to protect themselves from the sun and taking more frequent water breaks in the shade.