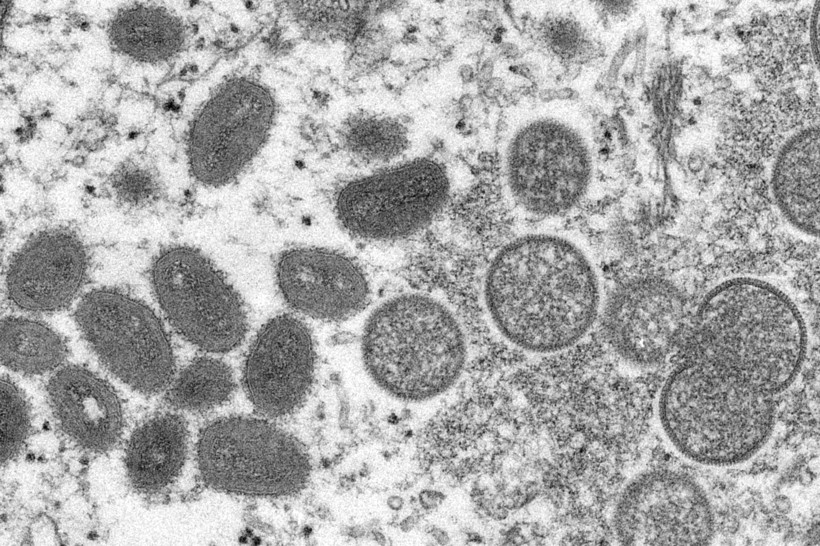 This 2003 electron microscope image made available by the Centers for Disease Control and Prevention shows mature, oval-shaped monkeypox virions, left, and spherical immature virions, right, obtained from a sample of human skin associated with the 2003 prairie dog outbreak. Health authorities in Africa said Thursday, June 30, 2022 they are treating the expanding monkeypox outbreak there as an emergency and are calling on rich countries to share the world's limited supply of vaccines in an effort to avoid the glaring equity problems seen during the COVID-19 pandemic. Cynthia S. Goldsmith, Russell Regner/CDC via AP

Wisconsin health officials announced the first confirmed case of monkeypox in the state.

The Dane County adult is currently isolating, and the risk to the public remains low, the state Department of Health Services reported Friday.

Nearly 400 people in the United States have been infected with monkeypox since the outbreak began in May. None of those infected have died.

"The number of monkeypox cases continues to rise in the U.S., so it is not a surprise that monkeypox has now been detected in Wisconsin," DHS Chief Medical Officer Dr. Ryan Westergaard said in a press release. "While it’s likely that additional cases will be found among Wisconsinites, we are relieved that this disease does not spread easily from person to person."

The illness itself isn't typically severe, but Westergaard said early detection and testing can help stop monkeypox from becoming endemic.

"It is a big deal that we make people aware of it, because we don't want to miss any cases," Westergaard told media Friday. "We can prevent, and treat people with monkeypox infection, and we can potentially prevent it from spreading and taking hold so it becomes an endemic virus. But we're only going to do that if we catch as many cases as we can."

Symptoms of monkeypox include unexplained rash and skin lesions, fever, chills and swollen lymph nodes. Most people with the virus recover in two to four weeks, without needing treatment, according to DHS.

For those who think they’ve been exposed to monkeypox, DHS recommends reaching out to a health care professional to see if they’re eligible for a vaccine or antiviral medication.

The first case of monkeypox has been reported in WI. The case is isolating and the risk to the public remains low. Monkeypox causes flu-like symptoms as well as rash and lesions. If you're concerned about a new or unexplained rash, call your doctor. Info https://t.co/omMtKWgpVR pic.twitter.com/AvBhP05jV1

Monkeypox is primarily spread through sustained skin-to-skin contact, and contact with items contaminated with the fluids or sores of a person with the disease. Westerguaard said a majority of cases worldwide have been transmitted through sexual or intimate contact — but the virus is not considered a sexually transmitted illness.

The Centers for Disease Control and Prevention has reported that most cases of monkeypox — though not all — have been among gay and bisexual men. In response, the agency is expanding their outreach efforts and raising awareness among the LGBTQ+ community.

In an effort to reduce the stigma surrounding monkeypox, CDC reiterated that "infectious diseases rarely stay within community or geographic boundaries."

Westergaard reiterated the CDC saying DHS "want(s) to make sure that people understand this is not a disease that affects only people who identify as LGBTQ."

"Anyone can get it," he said. "And it's important when we communicate about it to avoid language that can shame or marginalize people."

DHS's Outbreaks in Wisconsin webpage has updated case counts of monkeypot and information about the virus.