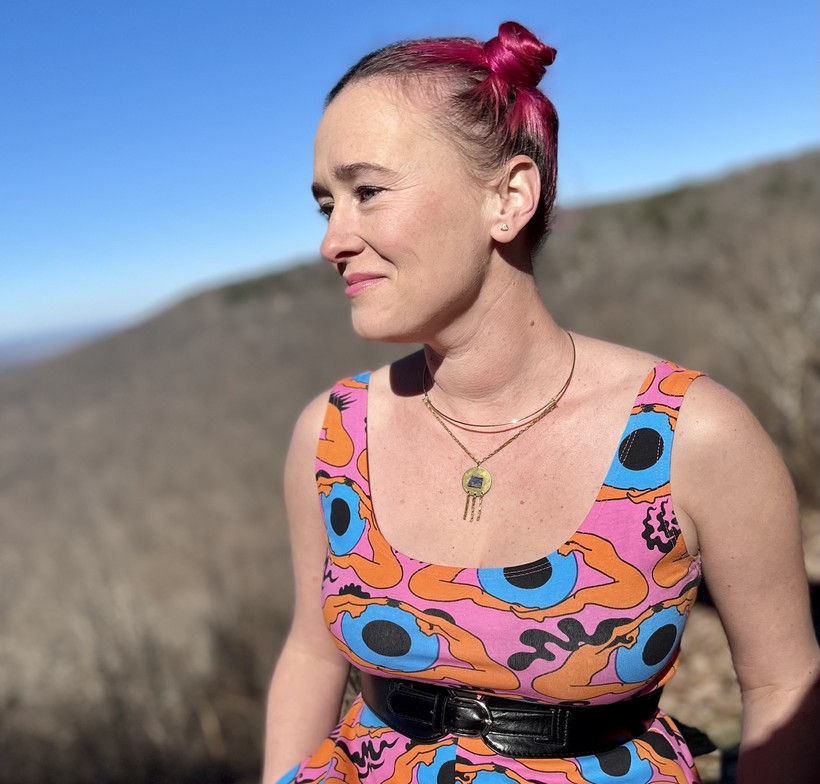 These women cover a wide swath of history — from ancient Greece to contemporary times. Kirby is not afraid to take creative risks and push the envelope so far that all that's left are itsy-bitsy, tattered remnants of the envelope. A perfect example is her story, "Midwestern Girl is Tired of Appearing in Your Short Stories."

"At the time, I was reading the slush pile for 'The Cincinnati Review,' which is basically the term for the huge pile of submissions that any literary magazine gets at a given time, (and) I was noticing a lot of stories in which women characters would show up," she told WPR's "BETA."

"They wouldn't really be named. They would say something helpful to the male protagonist, and then they would kind of saunter offstage," she continued. "And while I was doing that, I went to a reading and this man was reading a short story and there was a character in it that he just called 'Midwestern Girl.' And he never named her. And I just thought, what a great name for a superhero or something — 'Midwestern Girl.' And so I started writing these little vignettes where she sort of was sentient, if you will, and over the course of the story, she kind of takes over the narrative for herself."

Kirby said her characters represent those that she wishes she would have seen more in books she read while she was growing up. Many of the stories in Kirby's collection feature historical women. The title story, "Shit Cassandra Saw," is a perfect example. It features Cassandra, who was Apollo's Trojan priestess in Greek mythology.

"They were pretty rarely front and center," she said. "And so when I would learn their stories now — (the ancient British queen) Boudicca and the witch and all of these women — I just thought, how amazing, how cool to take a risk and have the chance to bring their voices to readers who might, if I'm lucky, look them up online and learn something about how radical women really have always been."

Kirby said that her favorite story about a historical woman is probably "First Woman Hanged for Witchcraft in Wales, 1594," which focuses on a woman named Gwen ferch Ellis. This story has a very soft place in her heart because it gives her the opportunity to change history, Kirby said.

"Unsurprisingly, the first woman hanged for witchcraft in Wales died, as you would," she said. "But you know, one of the things I always found so weird about witch trials was if you were a witch, how were a bunch of lame villagers in the 1500s going to kill you? You would just use your magic.

"So I wanted to write a story where the villagers actually got their hands on a witch. And so, of course, when they go to hang her, she can free herself. And that felt like a wonderful tribute to a very, very long ago Gwen, who was not that lucky."

Kirby has said her writing has become angrier as it has become more honest about the experiences women have faced throughout history, and in Kirby's own life.

"I think a lot of people today are angry," she said. "I feel like that's an emotion that is really widespread. And as a woman, you know, you're not really supposed to be angry. The label 'angry feminist' is a very quick way to have your point of view discounted. But I just felt dishonest writing about the experience of women without writing about the ways in which, yes, of course, we're angry."

Another standout story of Kirby's is "A Few Normal Things That Happen A Lot," which is based on some of her personal experiences, which are universal among women.

"So being harassed at a bus stop, being stalked around a grocery store, being groped. Those are all things that have happened to me," Kirby said. "And so that kind of catharsis of the story is that, when that happens to these women, they use their superpowers to kick some ass." The anger in the story is very, very real, even if the sort of imaginative world that I create to process that anger is more fabulist."

Here's the first paragraph of "A Few Normal Things That Happen a Lot":

"A woman walks down the street and a man tells her to smile. When she smiles, she reveals a mouthful of fangs. She bites off the man's hand, cracks the bones and spits them out, and accidentally swallows his wedding ring, which gives her indigestion."

Kirby's vivid imagination and her willingness to subvert story structure is on full display in "Jerry's Crab Shack, One Star" and "How to Retile Your Bathroom in 6 Easy Steps!"

As the title indicates, "Jerry's Crab Shack, One Star" takes the form of a Yelp review.

"I love those places on the internet that are so public and yet so private and so persona," Kirby explained. "And I really kind of wanted to see if I could make something out of that form. And the review begins to get off track, if you will, as rather than a review of Jerry's Crab Shack, it becomes kind of a review of his (the protagonist, Gary F.) wife, himself and his marriage. He's like, I would never review my wife, but if I were going to review my wife, here are a few things I would say. And so you could just kind of feel as his emotions kind of carry him away."