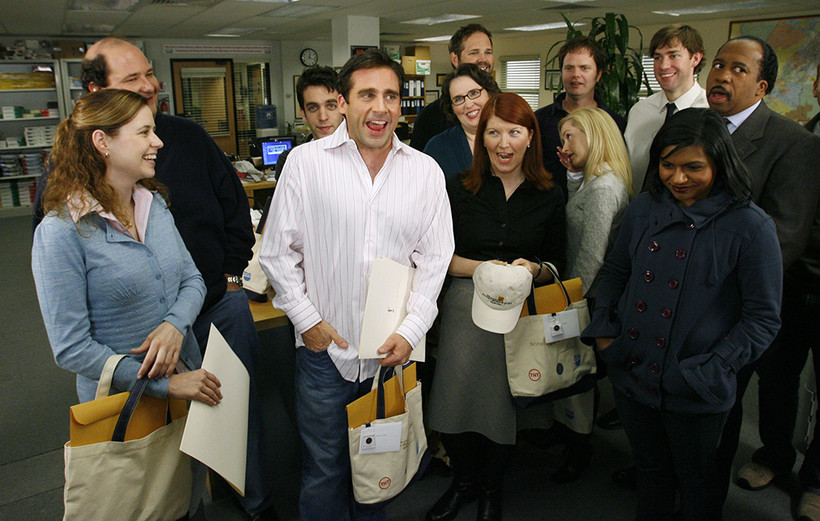 In spring 2018, Rolling Stone contributor Andy Greene set out to write a piece on the smash hit NBC sitcom, "The Office." He decided to put together an oral history of the infamous Season 4 Dinner Party episode where boorish Branch manager, Michael Scott, invites (or better put, tricks) his employees to attend the titular dinner party at his condo.

While he was interviewing all of the key players from the series for the article on this episode (pointed to by many as one of the best of the series), Greene realized there was enough there for a book on the whole show. So now, he has compiled the complete oral history of "The Office" in his book, "The Office: The Untold Story of the Greatest Sitcom of the 2000s."

The subtitle to the book is a bold claim. However, Greene told WPR's "BETA" it's not really a reach once you parse it all down. He said in 2005 the networks were clogged with "Friends" retreads and that the American version of the office launched a whole new style of sitcom.

"'Friends' was so popular, but it inspired all of these really boring paint-by-numbers shows about beautiful young people who were living in giant apartments all in New York City. It felt so unmoored in reality. It felt so fake that when 'The Office' came — as goofy as the show was — it was a slice of real life in a way," Greene said.

"The Office" would forgo a multi-camera, laugh track standard sitcom format and went on to popularize the documentary style — notably echoed in future sitcoms "Parks and Recreation" and the ABC phenom, "Modern Family."

"It was just a great and different way to present a show that was inspired by reality shows that were popping up at the time, and it was even filmed by the same camera team that did 'Survivor,'" said Greene. "Just taking that language of the reality show where you see a scene with sort of a shaky camera and then you see a talking head interview where they're talking about the inner dialogue of that moment was such a unique way to present a sitcom that people were fascinated by."

That conceit and a bulk of the first season of the United States "Office" was parroted from the British original created by Ricky Gervais and Stephen Merchant for the BBC.

TV executive Ben Silverman was in London on business and was flipping through the channels when he caught of glimpse of the show. Initially confused believing the show to be a real documentary, he immediately recognized its genius and sought to meet with Gervais.

"He realized it was fake, and he couldn't stop laughing," Greene said. "It was so clever. He called Ricky up. They met at a Starbucks, and he bought the rights to the show."

Gervais was fascinated by awkwardness and embarrassment. He and Merchant used silence to great clumsy, comedic effect in their series. That's tougher to do in a network sitcom format where you only have 20 some minutes per episode.

Numerous networks passed on the rights to adapt "The Office" for American television until NBC — led by former "Simpsons" writer and "King Of The Hill" showrunner, Greg Daniels — rose to the challenge.

"'King of the Hill,' it's so different than most cartoon shows. It's just a regular family in the middle of Texas. They're very working class," Greene said. "In the show, it felt so realistic? And that same vibe was brought to 'The Office' by Greg Daniels."

So, in spring 2005, the iconic Dunder Mifflin Paper Company and it's collection of quirky personalities fronted by inept boss Michael Scott, was introduced to American audiences. The rollout wasn't as smooth as NBC hoped. Greene argues the decision to recreate the British pilot shot for shot was regrettable.

"It forced Steve Carell to do a sort of impersonation of Ricky Gervais. And the Gervais character, which was named David Brent, was really aggressive, really cruel, and he had no redeeming qualities," said Greene. "Test audiences and the actual audiences, they hated it. It just didn't work and the critics just tore it to bits."

The six-episode first season was uneven, but displayed enough promise to narrowly avoid cancellation by NBC. Ironically, the strongest entry in that first batch was the only one that wasn't a carbon copy of a UK episode. It was an episode called "Diversity Day."

"That was groundbreaking. That was the first time that they did their own thing, which was actually very early, and they tackled race in a very head-on way and it was really bold. And if you watch it now, it's kind of shocking," Greene said. "It was sort of the first sign that the show was going to go in its own direction."

Daniels and the other writers also made a fortuitous decision that saved the show. The image of Michael Scott was still too negative for viewers. Luckily between seasons, Carell broke big with the hit comedy film, "The 40-Year-Old Virgin" and gave the writers just the tone to aim for when writing for Michael.

"They saw Steve Carell play a character who was very lonely, very sad, and just living as a sort of desperate life," Greene said. "But he infused the character with so much warmth that you love the guy, that you felt bad for him, that you really felt this person's pain. And they brought a lot of those characteristics into the retooled Michael Scott in the second season."

From there, the show skyrocketed along with Carell's career. For six more seasons, the show found a sweet spot at the intersection of sincerity and hilarity. Scott's antics were grounded in his unquenchable desire to be loved by his work family.

As Season 7 began, Carell and NBC couldn't reach an agreement on a new working contract, and he left the show near the end of the season. An epochal moment for both the staff and cast, the creators were saddled with a decision to end the show or move forward. The creative team put together two final seasons of the show with mixed results.

"I was told by a writer in that era that they realized later that (Michael) was a load-bearing character," said Greene. "If you take out that supporting wall, the entire thing just fell down. But I would argue that even before he left, the show was showing some rust that by the seventh season they'd lost a bunch of the best writers and Greg Daniels left to the run 'Parks and Rec.' So if you watched Season 7, it's full of duds, but the tone changed. It was more sitcom. It was not as funny. It was showing its age."

Even bookended by shaky seasons, it's tough to question "The Office's" legacy. Fifteen years after it began, it's still one of the top streamed shows on Netflix and finding new audiences in upcoming generations. Everyone is going to work in an office at some point, so the show has a very relatable universe. Greene argues it's one of the top sitcoms of all time.

"I think it's up there with 'I Love Lucy', 'Cheers' and 'Seinfeld' as sort of a timeless show that'll be funny now and even in 50 years."

The Office: The Untold Story of the Greatest Sitcom of the 2000s: An Oral History

The Office: The Untold Story of the Greatest Sitcom of the 2000s: An Oral History