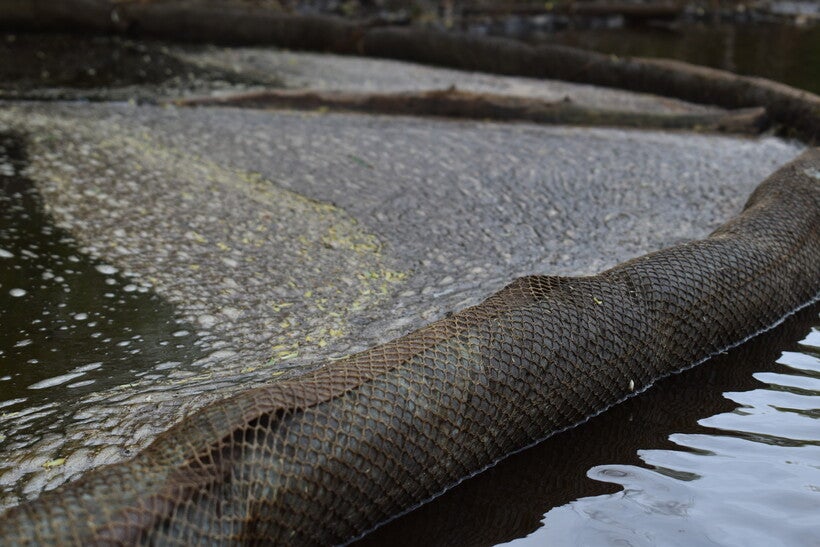 State environmental regulators propose permanent rule to carry out law barring use of PFAS foam except in emergencies
By Danielle Kaeding
Share:

Environmental groups argue a permanent rule that would enforce a law banning the use of PFAS firefighting foam is just a watered down version of an emergency rule weakened by Republican lawmakers last year.

The Wisconsin Department of Natural Resources held a public hearing Thursday on its proposed permanent rule that would outline appropriate testing, treatment, storage, containment and disposal of PFAS foam under Act 101. The law bans the use of PFAS foam except in emergencies and limited circumstances.

PFAS, or perfluoroalkyl and polyfluoroalkyl substances, are a class of thousands of so-called "forever chemicals" that are found in firefighting foam and everyday products. They’ve been linked to increased risk of kidney and testicular cancers, thyroid disease and fertility issues. The chemicals are also tied to reduced response to vaccines and don’t break down easily in the environment.

In December, the Legislature’s Republican-controlled joint rules committee voted 6 to 4 along party lines to suspend parts of the DNR’s emergency rule. The agency’s proposed permanent regulations would reflect those changes, which includes the elimination of any indicator levels for PFAS. The levels would’ve been used to guide treatment of foam contaminated water before it’s discharged to sewers or waterways.

"This turned an already modest effort by the Legislature to protect residents from PFAS pollution into a bare minimum action," said Erik Kanter, government relations director for Clean Wisconsin.

Lawmakers also removed a definition of treatment that would require the complete destruction or removal of the chemicals, and they exempted the regulations from applying to foam-contaminated materials like booms that may soak up PFAS.

"This rule for PFAS containing firefighting foam is the very least we could be doing right now," said Peter Burress, government affairs manager for Wisconsin Conservation Voters. "Wisconsinites are demanding that our decision-makers take PFAS seriously, but the Wisconsin Legislature continues to undermine progress."

Burress pointed to a GOP proposal that sought to prevent the DNR from bringing back its emergency rule on PFAS foam. He also highlighted another Republican-sponsored bill that would have barred communities who receive state grants to address PFAS from making polluters pay for contamination.

Environmental regulators are monitoring more than 50 sites with PFAS contamination across the state, including in Superior, Peshtigo, Marinette, French Island, Eau Claire, Rhinelander, Madison and Milwaukee.

Environmental groups and residents of communities impacted by PFAS contamination have lobbied lawmakers to pass the CLEAR Act, which failed in the last legislative session. The bill was brought back by Democrats this year, and it would set interim standards for PFAS in drinking water, among other things.

The DNR is in the process of crafting groundwater, drinking water and surface water standards for a mix of PFAS chemicals. State health officials have proposed a combined groundwater standard of 20 parts per trillion for PFAS chemicals that include PFOA and PFOS – two of the most widely studied chemicals. The U.S. Environmental Protection Agency has set a health advisory level of 70 parts per trillion and just recently released its plan to set standards for two PFAS compounds in drinking water.

Lawmakers, industry, water and municipal groups have pushed back against the DNR’s efforts to regulate PFAS. Sen. Steve Nass, R-Whitewater, co-chairs the joint rules committee, and he’s argued that the agency’s emergency rule went beyond the intent of the lawmakers.

Wisconsin Manufacturers and Commerce previously spoke out against the indicator levels that were originally included in the emergency rule. The state’s largest business lobbying group said it supports standards for PFOA and PFOS, but it’s urged the agency to pause its rulemaking and wait for federal standards.

WMC has also filed two separate lawsuits challenging the DNR’s authority to regulate PFAS in the absence of state and federal standards. The group has also lobbied for changes to PFAS regulations in emails to Natural Resources Board chair Fred Prehn, according to the Milwaukee Journal Sentinel.

The DNR’s permanent rule would apply to any facilities that use firefighting foam that contain PFAS in fire suppression systems, as well as those using foam for testing. The DNR estimates there are 150 to 200 such systems at public and private facilities.

Testing and disposing of PFAS foam is expected to cost $3,000 to $20,000 for each facility. That means small businesses could see an impact of up to $4 million per year to comply with restrictions under the law. Those costs are expected to decrease over time as alternative methods or replacement foams become available.

The DNR is accepting public comment on its proposed permanent rule through Nov. 11.