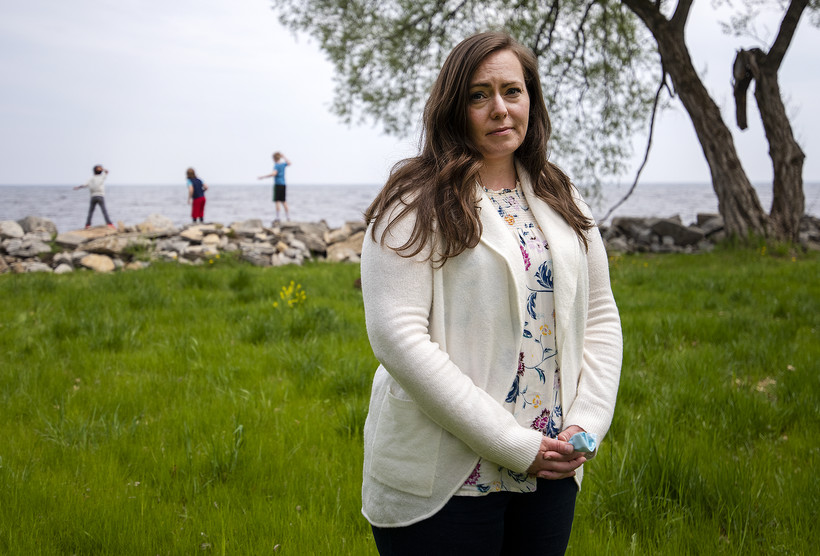 Kayla Furton’s children and nephew play near the water behind her Thursday, May 20, 2021, at her home in the Town of Peshtigo. Angela Major/WPR

As the EPA pursues PFAS standards, industry and residents are at odds over state regulation

Residents say the EPA plan highlights need for state action, while industry wants the DNR to hold off on state standards
By Danielle Kaeding
Share:

The EPA announced a broad plan last week to address perfluoroalkyl and polyfluoroalkyl substances that have been found in products like non-stick cookware, firefighting foams and food packaging. The chemicals don’t break down easily in the environment and have been linked to serious health conditions, including kidney and testicular cancers, thyroid disease and fertility issues.

The EPA’s plan would set federal drinking water standards in the next two years for two of the most widely studied PFAS chemicals: PFOA and PFOS. The strategy also seeks to prevent PFAS releases into the environment and speed along clean up and disposal of the chemicals at military and industrial sites.

"What it will all come down to for states and for communities like ours are tangible action," said Kayla Furton, supervisor for the Town of Peshtigo.

Furton, who is a mother of three, is among many residents that have been affected by PFAS contamination stemming from Tyco Fire Products’ fire training facility in Marinette. While she feels federal action is long overdue, Furton said it’s a step in the right direction that underscores the need for the Wisconsin Department of Natural Resources to set standards for PFAS.

"Not only do I think that the DNR needs to continue in the rulemaking process (to set standards), but Wisconsin needs to enact meaningful actual legislation pertaining to PFAS," said Furton.

Residents want state standards, but industry does not

The state’s largest business lobby, Wisconsin Manufacturers and Commerce, said in a statement that the state agency should "pause" its rulemaking and let the EPA set a national drinking water standard.

"WMC has consistently stated that regulation of PFOA and PFOS is warranted based upon the scientific evidence, and WMC believes a national standard is preferable to a patchwork of conflicting state standards," said Scott Manley, executive vice president of government relations for WMC.

WMC has filed two separate lawsuits challenging the DNR’s authority to regulate PFAS in the absence of state and federal standards. The group has also lobbied for changes to PFAS regulations in emails to Natural Resources Board chair Fred Prehn, according to the Milwaukee Journal Sentinel.

Environmental groups like Clean Wisconsin argue a complementary approach between federal, state, local and tribal governments is needed to address the chemicals.

"This isn't a case where the federal government is stepping up and so the state can step back," said Scott Laeser, water program director for Clean Wisconsin.

While the DNR is encouraged by federal action, the agency doesn’t plan to wait for federal PFAS regulations. The agency’s spokesperson, Sarah Hoye, noted states oversee groundwater standards — not the EPA.

"Our groundwater standards regulate what is protective to discharge to groundwater, but also what are the cleanup levels once groundwater is impacted," said Hoye in an email. “They provide private well owners and bottled water companies the standard for what we believe is protective for humans to consume."

Hoye highlighted that it will be years before the EPA finalizes standards, adding that the DNR’s process offers businesses and communities certainty now over limits needed to protect public health.

Other states like neighboring Michigan have already set their own PFAS standards in groundwater and drinking water. Activists emphasize that federal standards are necessary as the Department of Defense has pushed back against state efforts to test and clean up PFAS at military sites. That includes Laura Olah, who lives near the Badger Army Ammunition Plant near Baraboo.

"Most (DOD sites) have not completed investigations," said Olah, executive director of Citizens for Safe Water Around Badger.

In Wisconsin, military sites like Fort McCoy have reported extremely high concentrations of PFAS, recording levels as high as 120,000 parts per trillion. The Wisconsin National Guard has been taking steps to address PFAS contamination at Volk Field near Camp Douglas, Truax Field in Madison, and General Mitchell International Airport in Milwaukee.

The federal government is now conducting cleanup assessments at 700 DOD and National Guard sites nationwide. Under the EPA’s plan, the agency will designate certain PFAS chemicals as hazardous substances under the federal Superfund law or Comprehensive Environmental Response, Compensation, and Liability Act, or CERCLA. That will allow the agency to force polluters to pay for and clean up contamination, including at DOD sites where the military used firefighting foam that contains PFAS.

In a statement, Wisconsin National Guard spokesperson Maj. Joe Trovato said they have and will continue to follow the process for PFAS remediation under federal law.

"The CERCLA process is driven by federal law and associated funding is prioritized based on site investigations nationwide," wrote Trovato in an email. "We will continue to adhere to the CERCLA process and will remain actively engaged with each step and with our partners at the local and state level to keep the process moving forward."

EPA calls for more testing, but doesn't regulate PFAS as a class

Despite the EPA’s sweeping strategy to address PFAS, both Furton and Olah say it’s disappointing that the agency has not moved to regulate PFAS as a class of chemicals. PFAS represent thousands of individuals substances, most of which have not been studied.

"It'll be centuries before we would ever set standards, which is really discouraging because EPA allowed all of these PFAS compounds to be on the market, saying they were safe," said Olah. "But, the report that they issued says we have very little information."

Scientists argue research supports regulating PFAS as a class. Industry has long opposed the approach, including WMC. Manley said the business group is encouraged the EPA is acknowledging "that each PFAS substance has unique characteristics and that each PFAS compound has a unique public health profile."

The EPA says it's doing research to understand similarities and differences between PFAS chemicals and whether to address groups of the chemicals through regulation.

The EPA’s plan calls for all water systems serving 3,300 or more people and 800 smaller public water supplies to collect PFAS samples beginning in 2023, but it relies on significant funding from Congress. Olah fears the plan targets larger systems and leaves people served by small rural water utilities without the ability to gauge their risk of exposure.

Industry, municipal and water groups in Wisconsin have pushed back against efforts to test for and regulate PFAS. Gov. Tony Evers proposed funding for testing and 11 new positions to address the chemicals in his budget, as well as a $10 million grant program for communities. Republican lawmakers on the state’s budget-writing committee stripped most of Evers’ proposals from the 2021-23 budget.

After backlash, Wausau School Board won't cut contraceptives from sex education policy
Was your Wisconsin community a 'sundown town'?
Republican false presidential elector running to lead Wisconsin Election Commission
Authorities: Bear was uncharacteristically aggressive when it attacked a Medford couple in their home
Spring enrollment down at most UW campuses compared with 2021