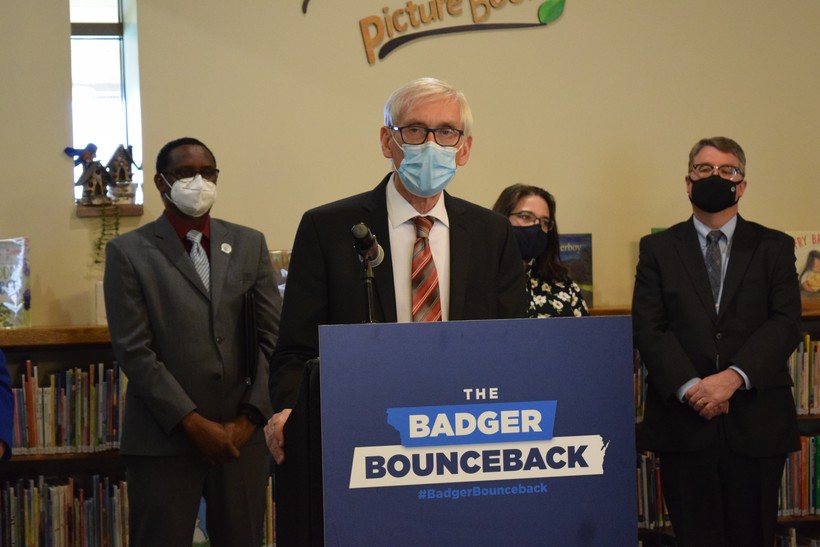 Gov. Tony Evers called on lawmakers to take action on a bill to provide funding and state support for communities dealing with PFAS contamination during a visit to the F.J. Robers Library in the Town of Campbell on Wednesday, April 21, 2021. Hope Kirwan/WPR

Gov. Tony Evers and Democratic state legislators are reintroducing a bill to provide funding and state support for communities dealing with PFAS contamination.

The Chemical Level Enforcement and Remediation Act, or CLEAR Act, was introduced by Democrats during the last legislative session, but the bill received little attention from Republicans.

Evers and the lawmakers announced the bill Wednesday during a visit to the Town of Campbell near La Crosse. The state Department of Natural Resources declared a state drinking water advisory for the town last month over concerns about PFAS levels in private wells linked to firefighting foam used at the La Crosse Regional Airport. The agency has provided free bottled water to as many as 4,300 residents.

Evers said he was hopeful Republicans would take action on the measure this session as the number of Wisconsin communities dealing with PFAS contamination continues to grow.

"I just think it is amplified every time we find it someplace else, and sooner or later, our friends in the Legislature will need to take this seriously," Evers said.

Voicing frustration that the bill did not receive a hearing during the last session, Evers called on lawmakers to help communities before worrying about the wishes of special interest groups or letting the courts decide who is responsible for the contamination.

"The responsible parties are always jockeying in the Legislature to make sure things don't happen that impact them indirectly in a bad way. We just have to keep fighting," Evers said. "We have to have people reaching out to their legislators saying, 'Now is the time.' When is it going to be in your district? It's coming, and all we have to do is measure it."

Lee Donahue, a member of the Town of Campbell Board of Supervisors, said residents are worried about the impact of PFAS contamination on their health, their property values and the environment.

"We have had to spend an overwhelming amount of time and energy and resources to get wells tested for a problem that we did not cause. And then face delays and uncertainty which have affected every family in town," Donahue said. "I’m worried about the health of my neighbors and the efforts it takes to get replacement water for all of our town residents. It is truly nerve wracking."

She said nearly every residential well tested has shown some level of PFAS contaminants and residents worry any level of contamination could be detrimental to their health.