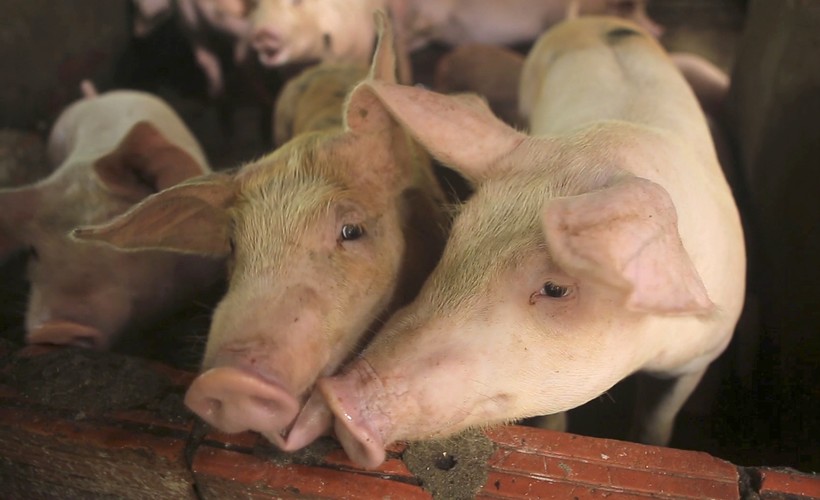 In this May 30, 2019, photo, pigs are kept in a pen in My Duc district, Hanoi, Vietnam. Asian nations are scrambling to contain the spread of the highly contagious African swine fever in an unprecedentedly huge epidemic governments fear have gone out of control. Hieu Dinh/AP Photo

One northern Wisconsin county's attempts to regulate large-scale hog farms has prompted agriculture and business groups to issue a letter warning board members they may face criminal charges.

Environmental groups have condemned the move, calling it an act of intimidation.

On Tuesday, the Polk County board weighed a pair of resolutions on whether to extend a moratorium on swine concentrated animal feeding operations, or CAFOs, and pass an amended land use ordinance that aims to require a conditional use permit for large-scale hog farms. The board voted down an extension of the moratorium, but it passed the amended ordinance.

The county has been studying local regulation of swine CAFOs to protect the environment and public health in response to a proposed large-scale hog farm in nearby Burnett County.

The proposals prompted groups like the state's powerful business lobby Wisconsin Manufacturers and Commerce, Wisconsin Dairy Alliance and Venture Dairy Cooperative to send a warning letter prior to the board's meeting. They argued approving the measures could be seen as misconduct in public office, which they noted is a felony offense under state law.

The groups contend the law does not allow a county to pass a moratorium on livestock siting with limited exceptions and that a Wisconsin Supreme Court decision has ruled local regulation of livestock siting is preempted by state law.

They also highlight an August letter to the county from the Wisconsin Department of Agriculture, Trade and Consumer Protection. The letter outlines several potential legal conflicts with the county's amended land use ordinance because it targets a specific species and doesn't include all standards set out in the state's livestock facility siting law. It also includes more than a dozen local conditions, not all of which comply with the law.

"For supervisors to receive this kind of a threatening letter hours before they are to vote on an issue, you know, a letter that implies that somehow they are going to be behaving in an unlawful way and possibly even according to the letter committing a felony — it's just absurd," said Sheaffer.

Sheaffer noted the law allows local officials to enact provisions that seek to protect the health and safety of the community.

Cory Fish, general counsel for WMC, argued the letter was meant to be informative, and added that the state informed the county that conditions within the ordinance must be based on science and show standards are needed to protect health and safety.

Doug Route, a county board supervisor, said the groups' letter was concerning to him. Route, a retired postal worker, fears he would lose his pension if convicted of a felony.

"I'd like to see more attention paid to the citizens' wishes, and we're attempting to do that," said Route.

Polk County Board Chair Chris Nelson wasn't concerned about the letter. He said various outside groups, whether they're seeking to protect the environment or producers' right to farm, have been trying to influence the local process.

"I'm very comfortable that our board is operating within the legal bounds and state statutes and following our oath of office," said Nelson.

Nelson said the county experienced challenges creating local regulations in line with what residents wanted because they were at odds with state law.

The board passed the amended land use ordinance on Tuesday, directing the county's environmental services committee to continue work to refine it. The board also directed its Health and Human Services Board to continue work on a CAFO operations ordinance.

When asked whether groups would pursue a legal challenge, WMC's Fish said they're keeping all options open.

Over 100 communities and more than two dozen counties have zoning or permitting ordinances under the state's livestock facility siting law, according to the state Department of Agriculture.

Siting of large farms and local control has been the subject of debate in the last year after the agency proposed several changes to the state's livestock facility siting law under former Agriculture Secretary Brad Pfaff. The proposed changes included new requirements to manage nutrient runoff and odor. Pfaff said the move sought to strike a balance between agriculture, the environment and rural communities.

The proposed update drew pushback from some farm groups and Republican lawmakers. The agency abandoned the changes in attempt to appease legislators shortly before they fired Pfaff.

Earlier this year, Republicans introduced their own bill to change rules for siting of large livestock farms that would give state government more control and grant farm groups more say over any future changes to standards. The proposal is now dead, but it could be brought back in the next legislative session.

Related Links:
How To Smell A CAFO
What Does CAFO Oversight Look Like In Wisconsin And Who Pays For It?