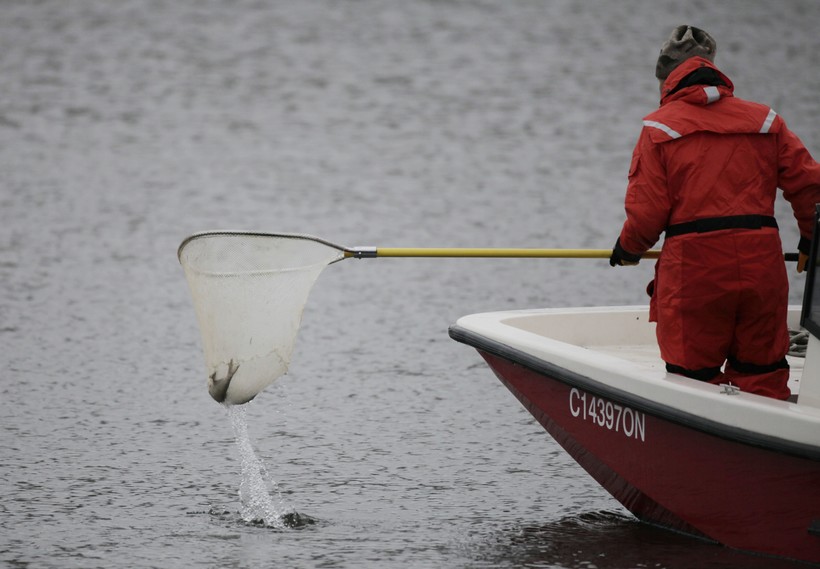 A crew member pulls a fish from the Chicago Sanitary and Ship Canal as they search for Asian carp Thursday, Dec. 3, 2009 in Lockport, Ill. A toxic chemical was dumped on a nearly 6-mile stretch of the canal as part of state and federal efforts to keep the voracious and invasive carp from reaching the Great Lakes.  M. Spencer Green/AP Photo

Leaders from Great Lakes states and Canadian provinces will meet in Illinois next month to discuss a path forward on preventing the spread of Asian carp into the Great Lakes.

The announcement was made Friday during the leadership summit for the Great Lakes and St. Lawrence Governors and Premiers in Milwaukee.

A binational and bipartisan group of Great Lakes leaders will discuss the U.S. Army Corps of Engineers roughly $831 million recommended plan at the Brandon Road Lock and Dam in Joliet, Illinois. The plan calls for additional defenses like noisemakers and an electric barrier at a crucial choke point to help keep Asian carp out of the Great Lakes.

Leaders are expected to convene in Chicago sometime in mid-July. At a press conference, Gov. Tony Evers said they will analyze whether the plan is reasonable or if other solutions can be made.

"It’s important that we get together to help get to that point where it looks like we understand what we’re going to do," Evers said. "I don’t know if what the Army Corps of Engineers is proposing is going to be the solution."

Illinois Gov. J.B. Pritzker has voiced concerns about the project because his state would be responsible for the non-federal share of the cost. So far, Michigan is the only Great Lakes state to offer $8 million in financial support for the project. Michigan Gov. Gretchen Whitmer said leaders need to move swiftly on a solution.

"If and when they breach into the Great Lakes, every one of us will pay an enormous price and that’s why Michigan’s taken such a bold leadership role and already has made some investments," Whitmer said. "We’re determined to see it through one way or another. We’ve got to ensure that we’ve got a barrier that’s impenetrable."

Supporters of additional protections at the Brandon Road Lock and Dam have disagreed over the use of an electric or physical barrier to prevent further spread of the invasive fish. Some states have feared a physical barrier would harm shipping in the region. A coalition of Great Lakes mayors said recently that proposed additional defenses at Joliet are a temporary solution and urged the federal government to speed up its timeline to address Asian carp.

The cost of installing measures to prevent the spread of Asian carp has tripled since initial estimates of $275 million. A report released last fall said additional defenses like an electric barrier, bubble curtain and noisemakers would run around $778 million. In a report to Congress last month, the head of the Army Corps put the cost of the recommended plan at roughly $831 million.

Environmental DNA for silver and bighead carp were discovered recently within five miles of Lake Michigan, but no actual fish were found. Great Lakes leaders say the fish, which outcompetes native fish for food, threatens the lakes and its $7 billion recreational fishing industry.

On Friday, Great Lakes leaders also signed two resolutions to show their commitment to protecting the public from contaminants like lead and per-and polyfluoroalkyl substances (PFAS) within their states while urging the federal government to provide the necessary funding to replace lead service lines. They also committed to sharing information on best practices to address PFAS contamination. The EPA has not yet released federal standards for the chemicals that have been associated with some forms of cancer, developmental issues and thyroid disease.

In addition, they're supporting Great Lakes cruises with a new marketing initiative and calling on Congress to fund the $32 million design and construction of a new Soo lock at Sault Ste. Marie, Michigan. They also announced efforts to expand trade with Europe and Japan.

Evers said he stands with scientists at the Wisconsin Department of Natural Resources for its approval of Racine’s request to withdraw up to 7 million gallons of water a day from Lake Michigan for Foxconn.

At the press conference Friday, Evers said department scientists took another look at the approval and came to the same conclusion.

"Foxconn has made commitments to use as little water from Lake Michigan as possible. That is a step in the right direction," said Evers. "But, we relied directly on the scientists in the Department of Natural Resources to review that again."

Environmental groups challenged the diversion, saying it violated the terms of the Great Lakes Compact. The compact protects the lakes from withdrawals outside the basin. A judge ruled in favor of Racine’s bid to divert water earlier this week.

Editor's note: This story has been updated to reflect that Illinois would be responsible for the non-federal share of the cost to implement the Army Corps' plan.