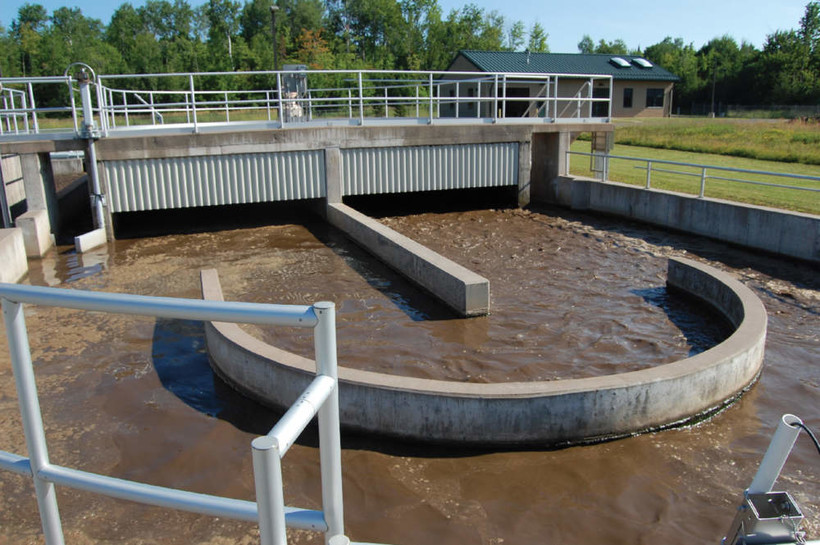 Oxidation ditches at the Bayfield Wastewater Treatment Plant. Photo courtesy of the City of Bayfield

City Of Bayfield Among Those Vying To Lower Energy Use, Mercury Emissions
By Danielle Kaeding
Share:

A handful of water utilities around the Great Lakes have been competing over the last year to reduce pollution by controlling the electricity they consume from the power grid. One northern Wisconsin community has been able to cut down mercury emissions as much as 25 percent by pumping water at certain times during the day.

The City of Bayfield is competing with cities like Ann Arbor, Michigan and Detroit to lower mercury and other emissions as part of the Water Utility Energy Challenge. Through the competition, five cities have been testing out new technology developed by researchers to track pollution, said Carol Miller, professor of civil and environmental engineering at Wayne State University in Michigan.

The technology can tell utilities what time of day is best to pump water by showing them when lower polluting power sources are providing electricity. She said they provide daily updates to utilities through one type of software known as Locational Emissions Estimation Methodology (LEEM).

"Every evening we provide an email update to the utility that gives them information about the next day’s emission intensity expected at the point where they’re doing most of their pumping," said Miller. "At Bayfield, they’re pumping up groundwater and bringing that water to surface and then they store it in a reservoir. From there, they can pump it out into the community."

"Before we were just running the pumps as is, it was kind of like a free-flow. Whenever the reservoirs needed to be filled, they would get filled," said Mather. "Now, we look at the reports in the morning and figure out the best times to pump for the day." The city’s water utility is small, pumping an average of 60,000 gallons per day. However, the city can pump up to 250,000 gallons each day during the tourism season. Josh Pearson, the former operator of the city’s utility, said they also cut back on their energy use last year compared to 2016.

"We used less electricity to pump more water for less money," he said.

Miller said that’s the ideal outcome for utilities using technology where emissions are reduced without impacting the bottom line.

"For many of these communities, you can do that because you can actually control the pumping times to be during a period when the electricity tariff is low," she said. "What you would like to do is look for a sweet spot each day where the electricity prices are low and further optimize based on emissions."

Ann Arbor’s water utility reduced its mercury emissions by around 24 percent through October of last year, said Lynne Chaimowitz, the utility’s budget and finance supervisor. She said they were able to pinpoint times where rates and emissions would be lower using the daily reports.

"They’re historically washing filters at night because that’s when we pay the lowest electricity prices, but they would just have the criteria of washing it after 7 p.m. and before 11 a.m.," she said. "With the data that the LEEM folks are able to provide us, we can alter that to do the filter-washing still within those periods, but we can also change it so that there’s hours where the emissions are lower than we would have historically done."

However, Miller noted some utilities may not be able to reduce emissions when energy rates are lower.

The City of Highland Park, Illinois, a participant in the challenge, found their water utility could reduce pollution during the day. However, energy rates there are lower overnight, according to the Don Jensen, superintendent of the city’s water utility.

"They encourage larger users to shift demand to off-peak hours to the overnight hours," he said. "We were trapped between conserving electricity and pollution at night or conserving cost at night."

Jensen said they were able to see marginal reductions in emissions of roughly two to three percent. Depending on location and a number of factors, Miller said utility operators may be able to control energy use and emissions through water storage to lower costs. Overall, she said the goal is that the technology would allow utilities and other energy-intensive industries more control over pollution and energy conservation.

The winners of the competition will be announced in June.