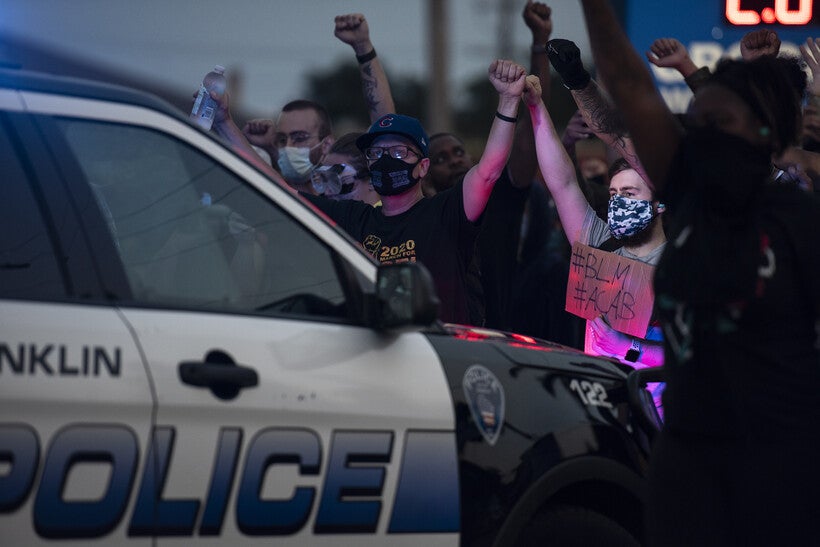 Gov. Tony Evers has authorized 500 Wisconsin National Guard troops to deploy to Kenosha on Wednesday in response to three nights of violence and unrest following the police shooting of Jacob Blake on Sunday. The governor has also accepted an offer from President Donald Trump for additional federal law enforcement support.

Two people were killed and one was injured in Kenosha on Tuesday night after clashes between police, protesters and groups of armed civilians. Protesters have been marching since Sunday in Kenosha and across the state in response to police shooting Blake, a Black man. Blake is alive, but suffered serious injuries.

Evers declared a state of emergency on Tuesday in response to two previous nights of violence and destruction, doubling the number National Guard troops deployed to Kenosha from 125 on Monday to 250 on Tuesday.

At least 100 police officers from other communities in Wisconsin have also traveled to the city to support local law enforcement, according to a statement from the Kenosha mayor and county executive on Tuesday.

According to the governor's office, Evers accepted federal help with bringing other states' National Guard divisions to Wisconsin, as well as support from the FBI. The governor's office didn't respond to a request for comment about how many out-of-state soldiers or FBI agents will be coming to the state. The move came a day after the governor refused the Trump administration's offer to deploy officers from the Department of Homeland Security to Kenosha.

At a press conference in Kenosha on Wednesday afternoon, local law enforcement officials also pointed out U.S. Marshals and officers from the federal Bureau of Alcohol, Tobacco, Firearms and Explosives (ATF) have already been present in the city to support local officers.

Speaking at a press conference on Wednesday afternoon, board member Zach Rodriguez said the number of National Guard soldiers deployed so far hasn't been enough to prevent violence and destruction in the city. Speaking specifically about Monday evening, he said law enforcement were outnumbered by protesters "three or four to one, easily."

U.S. Rep. Bryan Steil, who represents the area, said the environment in Kenosha has gone "from bad to worse" and that Evers' response has been "woefully insufficient."

"Again, I call on the Governor to accept the President’s offer of assistance," Steil said. "The violence needs to stop now."

"Although it will not guarantee peace, Governor Evers should reconsider his refusal to accept President Trump’s offer to send more personnel to restore order," Johnson said. "Anarchy and chaos will not advance justice, and must be stopped."

Both Steil and Johnson later lauded the governor's acceptance on Wednesday.

A spokesperson for the governor confirmed Evers spoke with President Donald Trump and White House chief of staff Mark Meadows on Tuesday and declined an offer of federal troops from the Department of Homeland Security.

"The governor informed them we’d be increasing Wisconsin National Guard support in Kenosha and therefore would not need federal assistance in response to protests but would welcome additional federal support and resources for our state’s response to COVID-19," spokesperson Britt Cudaback said via email.

Cudaback said the governor had spoken with both the mayor of Kenosha and the Kenosha county executive on Tuesday and had "fulfilled every request for support we’ve received from the City of Kenosha and Kenosha County" at the time.

In an online statement posted Tuesday, the Kenosha County Sheriff said "we are working to bring in help from federal authorities as quickly as possible."

"We have a feckless governor who does almost nothing," Vos said. "Those people did not have to die, and because of Tony Evers’ actions, they’re dead."

"When your house is on fire, you do not refuse your neighbor's hose," he wrote.

Meanwhile, Democratic state Sen. LaTonya Johnson of Milwaukee released a statement blaming Republicans for the unrest. She said a lack of action in response to the Black Lives Matter movement at the state Capitol has spurred more discontent.

"This is what it looks like when my Republican colleagues fail to do their job, and when they choose politics over people’s lives by refusing to enact legislation that is readily available simply because it was written by 'liberals,'" she said, presumably referencing nine proposals put forward by Evers in June.

The governor has also called a special session of the Legislature, set for next week, to take up bills related to police training. He has said he doubts the GOP-controlled Legislature will actually meet.

"The question for us, Wisconsin, is when are we going to make Republicans do their jobs, or do we continue to sit idly by and watch this state burn to the f---ing ground?" Johnson said.