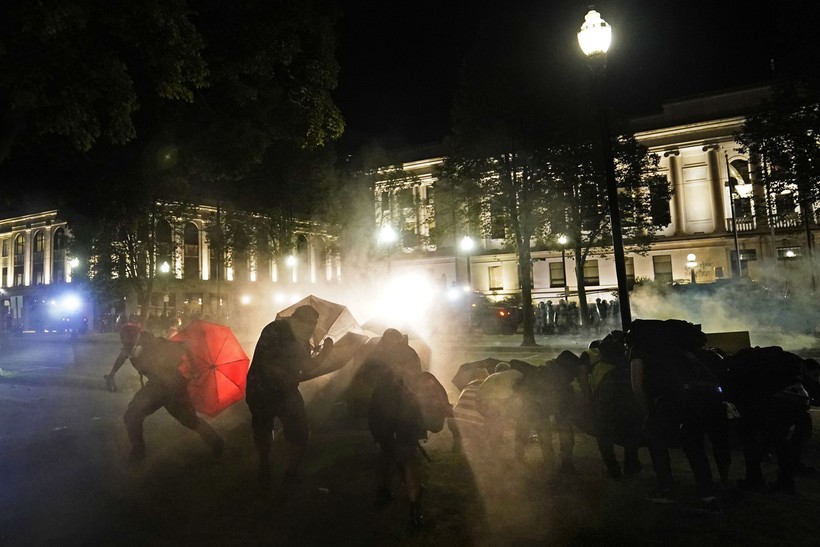 Protesters take cover from tear gas fired by police outside the Kenosha County Courthouse, late Monday, Aug. 24, 2020, in Kenosha, Wis. Protesters converged on the county courthouse during a second night of clashes after the police shooting of Jacob Blake a day earlier turned Kenosha into the nation's latest flashpoint city in a summer of racial unrest. David Goldman/AP Photo 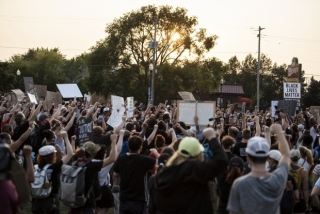 Wisconsin's governor declared a state of emergency Tuesday after two nights of protests left businesses vandalized and dozens of buildings set on fire in a city where police shot a Black man multiple times, apparently in the back in view of his children.

The shooting of Jacob Blake on Sunday in Kenosha was captured on cellphone video and ignited new protests over racial injustice in several cities.

Along with the emergency declaration, Gov. Tony Evers authorized an increased deployment of state National Guard troops to Kenosha County, from 125 Monday to 250.

In a statement, Evers said the deployment is meant to, "ensure individuals can exercise their right (to protest) safely, protect state buildings and critical infrastructure, and support first responders and fire fighters."

"The ability to exercise First Amendment rights is a critically important part of our democracy and the pursuit of justice," Evers said. "But there remains a line between peaceful assembly and what we saw last night that put individuals, families, and businesses in danger."

Meanwhile, Blake's family and their attorney shared more information about his condition during a press conference on Tuesday afternoon.

Attorney Ben Crump said at least one bullet severed Blake’s spinal cord and shattered his vertebrae, leaving him paralyzed from the waist down.

"It is going to take a miracle for Jacob Blake Jr. to ever walk again," Crump said.

Crump said Blake had almost his entire colon and small intestines removed and also suffered damage to his kidney and liver. At the time of the press conference, Blake was in surgery and Crump said he will likely need additional surgeries.

Blake’s parents and sisters attended the press conference, as well as his three sons who were in the car when he was shot on Sunday evening.

"They shot my son seven times. Seven times, like he doesn’t matter. But my son matters. He’s a human being, and he matters,” said Blake’s father, Jacob Blake Sr.

Julia Jackson, Blake’s mother, said her son was "fighting for his life" and that her family needed prayer. She said the damage done to the city of Kenosha did not reflect her son or her family. 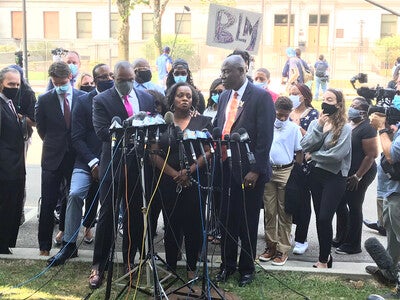 "I’m really asking and encouraging everyone, in Wisconsin and abroad, to take a moment and examine your hearts," Jackson said. "As I pray for my son’s healing physically, emotionally and spiritually, I also have been praying even before this for the healing of our country."

Monday night in Kenosha, police again fired tear gas at hundreds of protesters who defied a curfew, threw bottles and shot fireworks at law enforcement guarding the courthouse. Police fired the tear gas about 30 minutes after an 8 p.m. curfew took effect, but many protesters remained out hours later.

Buildings and vehicles were set ablaze across the city through the night. A Wisconsin Department of Corrections building on 60th Street was reduced to rubble after being set on fire by some protesters. 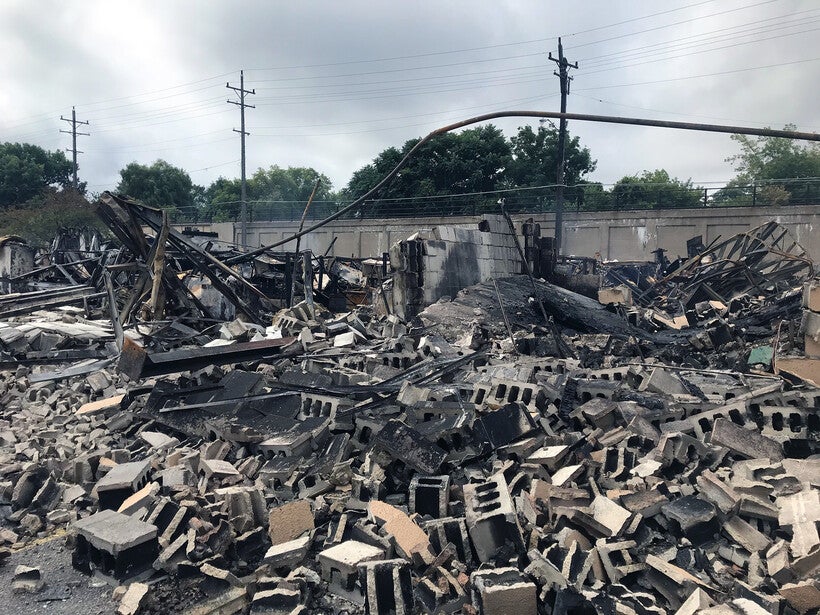 A Department of Corrections building in Kenosha was burned to rubble Monday night. Madeline Fox/WPR

Melissa Jaramillo, who lives in downtown Kenosha, was helping clean graffiti off of an overpass near the corrections building on Tuesday afternoon.

She said it was "heartbreaking" to see the situation playing out in her community.

"You can see it on TV, and you see all the news, but then it’s a completely different story when you walk outside and you see places that you grew up in, that you went grocery shopping in, rode your bikes around, you know — and it’s not a safe community, which is sad," Jaramillo said.

She said she’s heard a mix of positive and negative comments from people driving by while helping clean up the damage.

Another Kenosha resident who asked to be identified as TW said people in the community are "fed up."

"It’s been a grueling few years of this, and it’s sad that it had to be our city to have to be the icing on the cake, but God has a way of exposing evil," TW said. "And it’s really sad that one man could do wrong and everyone else has to suffer, but this is a situation that could’ve been handled a long time ago — agencies had opportunities to handle it. I don’t look for violence, I don’t believe in violence, but this is the reaction that people are going to give at the time."

TW said he was confident Kenosha would recover and said the community didn’t need "outside interference."

"The heart of Kenosha’s amazing, we’ve got a bunch of resilient people. We’re going to grow from this, it’s going to get better from this, we’re going to rebuild our city — right now, people are just making statements against offices that have been dirty for years," TW said. 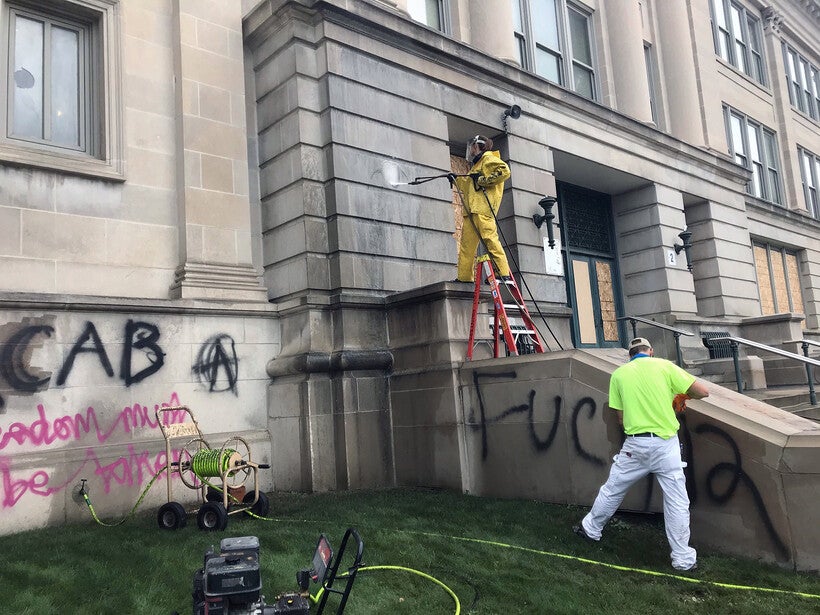 Several downtown buildings had broken windows and were being boarded up on Tuesday afternoon. Reuther Central High School was tagged with anti-police graffiti and had scorch marks outside the building.

By Tuesday afternoon, a temporary barricade was being constructed around the Kenosha County courthouse. The building was guarded by a line of police in riot gear during protests Monday night.

Keir Powell, superintendent of solid waste and recycling for the city of Kenosha, said at least seven garbage trucks and two dump trucks used for snow removal have been set on fire since protests erupted on Sunday. Powell said Kenosha Police were using the vehicles to block traffic around the city’s municipal building. He said the damaged garbage trucks were recently retired by the city and will not impact garbage pick up. 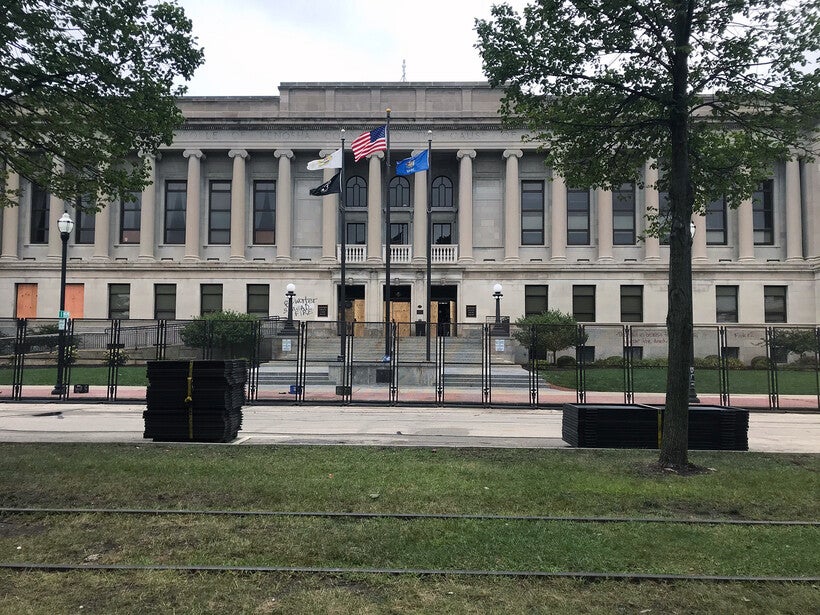 A temporary barricade was constructed Tuesday, Aug. 25, 2020, around the Kenosha County courthouse after nights of protest. Madeline Fox/WPR

Hundreds also took to the streets in downtown Madison to protest the shooting. Police there also deployed tear gas and pepper spray on crowds, and reported arresting six people after some protesters damaged and looted businesses and set dumpster fires.

During a press conference Tuesday afternoon, Madison’s interim Police Chief Vic Wahl said around 40 businesses sustained damage. One dumpster was set on fire and rolled towards police, while other officers were struck with bottles, rocks and other objects. In addition to Monday night's arrests, Wahl said officers were attempting to find several other people wanted for looting and property damage.

Madison Common Council President Sheri Carter called for an end to the damage.

"I am angry and I know you are too. And you feel the need to express that anger, but a protest has purpose. It’s the voice of many who want to effectuate change in America. It's the voice to effectuate change in Wisconsin. And it is the voice to change right here in Madison," Carter said. "You are not protesting anything when you swing with your hands, break windows, set fires, carry knives, loot. We protest for change, not the burning."

Carter said the property damage distracted from the need for civil justice and called on protesters, "not to derail the movement by changing the focus."