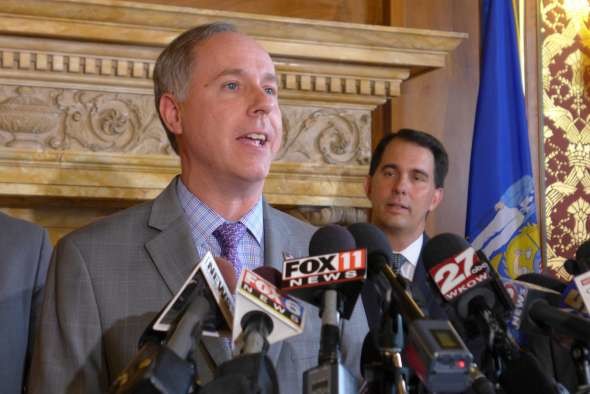 Both Tax Cuts Would Take Effect Before School Begins And Just Months Ahead Of 2018 Election
By Shawn Johnson
Share:

Wisconsin would offer a one-time sales tax holiday in addition to a one-time child tax credit under a deal worked out between Gov. Scott Walker and Assembly Republicans.

Both plans would take effect just ahead of the next school year and just months before the state's 2018 general election.

The child tax credit would be similar to what Walker announced in his State of the State address last month, but it would be temporary instead of permanent.

Parents with children under age 18 would qualify for $100 per child if they apply for the money starting this summer. The state would cut checks in July to parents who qualify.

The sales tax holiday is new and comes after some conservatives complained Walker's original plan excluded taxpayers who don't have kids. It would be in effect the weekend of Aug. 4-5.

"I don't have any children and there's a lot of Wisconsinites who don't," said Assembly Speaker Robin Vos, R-Rochester. "They would also have the chance to get back some of the sales tax that they pay in back in a different form."

The two-day event would eliminate the state's 5-percent sales tax on purchases up to $100. In other words, someone who purchased a $100 product would save $5 in sales taxes.

Vos said people who make multiple purchases of $100 or less would get the benefit of the tax holiday each time.

Walker praised the changes, saying they were in line with his original plan.

"As I promised, when we have a surplus, we will give it back to you," Walker said.

Democrats attacked the move as an election year ploy to buy votes.

“This is an election year bribe," said Assembly Minority Leader Gordon Hintz, D-Oshkosh. "The governor might as well save money on postage and just hand these checks out at polling places in November."

"This announcement reeks of desperation in a tough re-election year for Gov. Walker and Legislative Republicans," Shilling said.

It was unclear whether Senate Republicans would be onboard with the plan. Some GOP lawmakers have been critical of sales tax holidays in the past, referring to them as gimmicks.

Sen. Majority Leader Scott Fitzgerald, R-Juneau, told reporters he still needed to talk to his Republican colleagues about the plan.

"I didn't feel comfortable walking out of the governor's office yesterday and saying, 'Count the Senate in,'" Fitzgerald said. "Cause we haven't had that discussion."